Top 10 Places in Beijing – Qianmen to Jingshan Posted by sasha on Nov 29, 2013 in Culture, Uncategorized

We’re already half-way through our countdown of the Top 10 places in Beijing. Here’s a recap for those of you who’ve missed out:

Now we’re moving on to the bottom half of the list as we explore some of the most famous spots in Beijing. As these are all totally doable, we’re grouping them together in one epic spot: 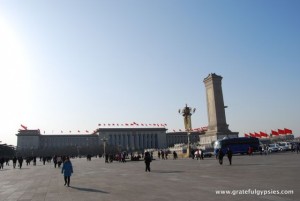 This walk will take up most of your day, so you’d better get an early start. If you’re really an early bird, you can get before the sun and head straight to Tiananmen Square (天安门广场 – tiān’ān mén guǎng chǎng) for the daily flag raising ceremony. It always happens at sunrise, so be sure to check the exact time before heading out. It’s best to get there a few minutes early to beat the crowds and get a good spot. After all of that patriotic fervor, you’ll probably be hungry. 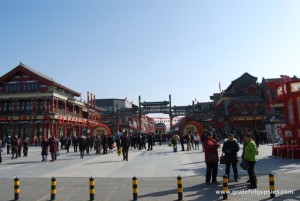 Take a stroll along Qianmen Street.

As such, head out of the square and take a stroll along Qianmen Street (前门大街 – qián mén dà jiē). The name literally means the “Front Gate,” and once guarded the southern entrance to the inner city. Although the main street itself has been completely remodeled, complete with a Starbucks and KFC, you can still get lost on the sides in the maze of alleyways, known as hutong (胡同 – hú tòng) in Chinese. Get a classic Beijing breakfast of stuffed steamed buns (包子 – bāo zi), fried dough (油条 – yóu tiáo), and soy bean milk (豆浆 – dòu jiāng). After some more wandering, you should be ready to check out some more of the square and its surrounding area. 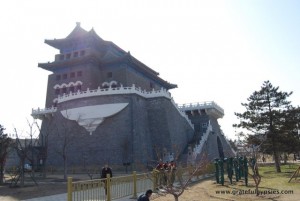 The “Front Gate” itself, which used to guard the inner city. 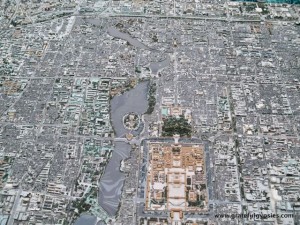 Mini-Beijing at the Planning & Exhibition Hall.

While Tiananmen Square itself is incredibly important in China, you’ll probably find it a bit boring. After passing through the security check once already for the flag raising, it’s best to just stay out of the square itself and take in some of the surrounding museums. The National Museum (国家博物馆 – guó jiā bó wù guǎn) is free and has some incredible exhibits. The Planning & Exhibition Hall (规划展览馆 – guī huà zhǎn lǎn guǎn) is also worth checking out, mostly thanks to its 1:750 scale model of the city. After a museum, you might want to grab a cup of tea or coffee and relax for a minute, because you’ve still got a lot of walking to do. 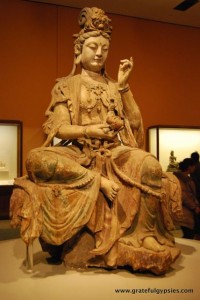 One of many interesting exhibits in the National Museum. 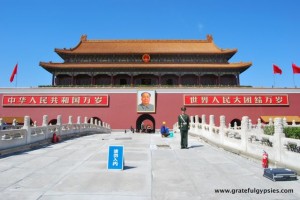 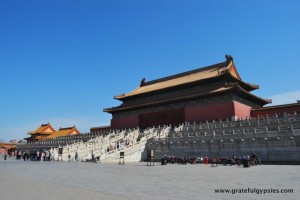 Right across from the square, you’ll find the entrance to the Forbidden City (紫禁城 – zǐ jìn chéng), although Chinese typically refer to it as the Imperial Palace (故宫 – gù gōng). When emperors reigned over China, normal people were literally forbidden from entering this compound. Those days are long gone, though, and modern-day China is happy to welcome you in for a fee of 40-60 RMB, depending on the season. The grounds are massive, so you’ll need a few hours if you truly want to see it all. 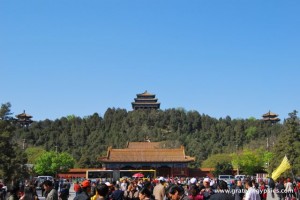 Across from the Forbidden City, you’ll find Jingshan Park. 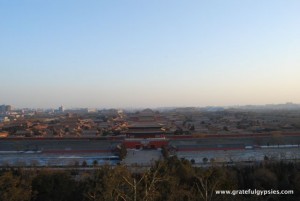 View from the top of the hill, where you can see old Beijing…

After walking out of the north side of the Forbidden City, you can simply cross the street to find Jingshan Park (景山公园 – jǐng shān gōng yuán). Once a private imperial garden attached to the palace, Jingshan is now a public park that is highly popular with locals. As we’ve previously mentioned in the post about local parks, this is a great place to experience local Beijing culture. On a clear day, head to the top of the hill for one of the best views in the entire city. Even on a nasty, smoggy day, you’re sure to have a better day in the park than the last emperor of the Ming Dynasty – Chongzhen (崇祯) fled to Jingshan and hanged himself from a tree to avoid capture by the newly proclaimed Shun Dynasty. 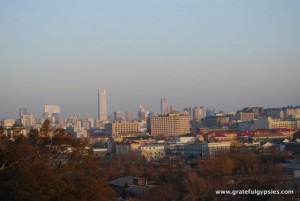