Most people know that China is the world’s most populous country, with over 1.3 billion people. Not so many know that the huge population of China is actually composed of 56 ethnic groups (民族 – mín zú). In truth, not everyone who lives in China identifies themselves primarily as “Chinese.” It is a very culturally diverse nation, as all of these groups have their own customs, architecture, clothing, festivals, and so on. Although the country is predominantly Han (汉 – hàn) at over 90%, there are 55 other groups classified as ethnic minorities (少数民族 – shǎo shù mín zú) that reside in China. In a recent post, we introduced the Splendid China park in Shenzhen where you can learn a lot about the many ethnic groups in the country. To give you a better understanding of the many groups and how they fit into Chinese society, here’s a list of all 56 groups (names in English, Chinese, and pinyin) in order from the largest to smallest: 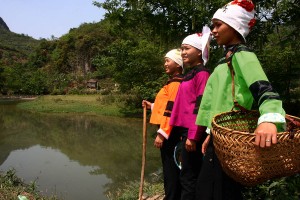 While it helps to learn the names of all of China’s ethnic groups, it’s better to be able to actually see them:

This short video shows a picture of each ethnic group, along with the name in both Chinese and English.

Together, these 56 groups make up the population of China. Of course, in big cities such as Beijing, Shanghai, and Guangzhou, there are also thousands of expats from all over the globe; however, they don’t count towards the population of China. While many of the ethnic minorities of China are somewhat isolated from the rest of the country, lots of them migrate to the big cities to find better opportunities.

Learn more about the 56 ethnic groups in this video from “Hello China.”

Although most people in China can speak Mandarin (or Cantonese down south), many of these ethnic groups have their own spoken and written languages that are unintelligible to other groups. They follow different religions, use different recipes, and build different houses. Each group is culturally unique – one of the most fascinating aspects of China.

A 10 minute preview of a longer documentary about the ethnic groups of China.

Most of the ethnic minorities of China can be found in the northwest, southwest, and northeast parts of the country. In all of China, Yunnan is home to the most groups, with 25 of them calling this southwest province home. I’m moving down there next month, partially because I’m sick of the weather and pollution in Beijing and partially because I want to learn more about the many ethnic minority groups that live there. Hopefully there will be lots of interesting new content on the blog in the next year or so as I get the chance to explore this incredible corner of China.