Chinese Character of the Year 2013 Posted by sasha on Jan 3, 2014 in Culture, Vocabulary

There are thousands upon thousands of Chinese characters, the most interesting and frustrating aspect of this ancient language. With so many, is it possible that just one could be used to sum up the year 2013? Well, Singapore’s Chinese language newspaper, Lianhe Zaobao (联合早报 – lián hé zǎo bào), seems to think so. In fact, 2013 was the third year in a row that the news outlet ran a poll where readers could choose from one of ten Chinese characters to best represent the year. The choices could all relate to big events throughout the year in one way or another. Before we find out which characters were on the ballot for the year 2013, let’s go back and see which characters won in the previous two years:

In 2011, rising prices of property and the cost of living in general weighed heavily on people’s minds. Last year, amidst a bunch of high-profile sex scandals, the character for lust took the award. Now, let’s see which ten characters were up for the vote in 2013:

The short trailer introducing the ten characters for 2013.

Which one could it be? With a once in ten years change of power in China, “politics” seems like a good choice. Or with Mr. Xi’s determination to stamp out corruption in the Middle Kingdom, perhaps “greed” could be the top choice. Of course, the newspaper is based in Singapore, so perhaps events in China did not factor in people’s decisions so much. From December 2 to 22, readers could vote on zaobao.com, Facebook, by SMS, or by mail. In 2013, about 130,000 people cast a vote. Let’s see the Top 3 characters. Drum-roll, please… 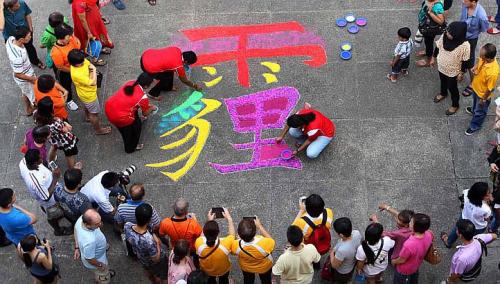 Indeed, 2013 was a hazy year, as Singapore its worst haze in decades with a hazardous PSI record of over 400. Of course, the terrible air pollution in China was also well documented in 2013, especially the awful air quality in Harbin.

PBS Newshour story about the pollution in Harbin.

Let’s hope that China and Singapore take more measures to reduce levels of air pollution in 2014. At least for this blogger, the horrendous air quality in Beijing was the straw that broke the camel’s back and made me decide to move out of the Chinese capital. Hopefully a more positive character will win the poll at the end of this year!