We’ve talked a lot about Chairman Mao over the past few months, from his birth all the way up to the Cultural Revolution. Here are the links just in case you’ve missed any of it: 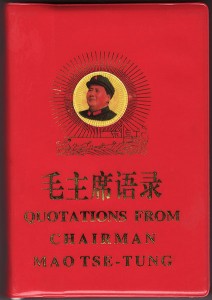 In that last post, we discussed how Mao managed to mobilize an army of overly enthusiastic Chinese youths to take up his cause. They would come to be known as Red Guards, and their zeal for his ongoing revolution eventually came to be too much, even for the Chairman himself. How exactly did Mao manage to rally these kids behind his cause? Well, propaganda had a lot to do with it. Posters were everywhere, and many young people also received copies of Mao’s “Little Red Book.” Officially called “Quotations from Chairman Mao Tse-tung” ( 毛主席语录 – máo zhǔ xí yǔ lù), this is one of the most printed books in history – only the bible has been printed more. When one thinks of the Cultural Revolution – or Mao in general – the image that comes to mind is often of young Chinese feverishly waving their little red books in the air, reciting Mao’s quotes word for word. What exactly was in this book, and how did it change the course of Chinese history?

Originally, the book was conceived as an inspirational military/political document. After a few revisions, the book was sent to the printing press covering 33 topics through over 400 of Mao’s quotes. Ideally, 99% of the Chinese population would read the book. To ensure that the book could be so widely distributed, the printing presses of the country were pushed to their limits, with hundreds of new printing shops having to be built simply to meet the demand. Lenin and Marx had to take a backseat to Mao, as the push was for the little red book to get into the hands of as many Chinese as possible. During the Cultural Revolution, it was an unwritten rule that all people had to read the book – not only students, but also workers. If you take a closer look at propaganda posters from this time period, you’ll notice that basically every character is clutching their copy of Mao’s book. 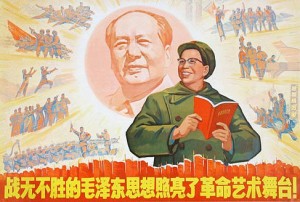 “The invincible thoughts of Mao Zedong illuminate the stages of revolutionary art!”

The topics covered throughout the book are varied; they range from “Socialism and Communism,” to “War and Peace,” to “Revolutionary Heroism,” and many more. Here are some of the more famous quotes from the book:

“Political power grows out of the barrel of the gun…”

“To rebel is justified.”

“A revolution is not a dinner party, or writing an essay, or painting a picture, or doing embroidery; it cannot be so refined, so leisurely and gentle, so temperate, kind, courteous, restrained and magnanimous. A revolution is an insurrection, an act of violence by which one class overthrows another.”

“To read too many books is harmful.”

“War can only be abolished through war, and in order to get rid of the gun it is necessary to take up the gun.”

“Don’t give a child a fish but show him how to fish.”

“If the U.S. monopoly capitalist groups persist in pushing their policies of aggression and war, the day is bound to come when they will be hanged by the people of the whole world. The same fate awaits the accomplices of the United States.”

“Politics is war without blood, while war is politics with blood.”

“Everything under heaven is in utter chaos; the situation is excellent.”

These days, you won’t see Chinese youths waving their copy of the book. In fact, today’s Chinese college students are more likely to be seen starring at their iPad than at quotations from Chairman Mao. In my nearly five years of living in China, the only places I’ve seen the little red book are souvenir markets aimed at foreign tourists. Although modern Chinese people may not study Mao’s words so diligently as they once did during the Cultural Revolution, his presence is still everywhere you look – on the gate above Tiananmen, on those classic propaganda posters, and on every banknote in the country (0ther than the useless small change). Love him or hate him, you have to admit that Mao was and still is an important figure in not only Chinese history, but world history. In our last post on the Chairman, we’ll talk about his final years.