It’s been a while since our last post about Chinese idioms (成语 – chéng yǔ). In Chinese, the word for idiom literally means “to become a part of the language.” All idioms are composed of four characters, and most come from ancient literature. As such, the meaning of the idiom itself is usually more than the four characters on their own can describe. The overall meaning is linked to the story or myth from which it came. They can be difficult to understand, as they do not follow the usual grammatical structure and syntax of the modern Chinese spoken language. To catch you up on what we’ve covered already, here are the links to previous posts:

Don't give up halfway.

According to this story, there was a man named Yue Yang Zi (乐羊子) who lived during the Warring States Period (战国时期 – zhàn guó shí qī). Yue left home and his wife to pursue his studies, but returned after just about a year. Of course, his wife was shocked to see him home so soon, so she asked him if he had finished his studies more quickly than he had anticipated. He replied, “I’ve been away so long, I was just homesick” (出门时间长了想家 – chū mén shí jiān cháng le xiǎng jiā). His wife, who had been weaving, proceeded to take a pair of scissors and cut the cloth she had been working on. “What’s the difference between me wasting time on this cloth and you wasting time on your studies?” she asked her husband. Yue felt ashamed about giving up, and he felt moved by his wife, so he headed back out to continue his education. Seven years later, he returned as an official.

This idiom is used in a derogatory sense for someone who has given up, but it is also used to motivate people to continue to work hard.

HERE is a good video of this idiom from the Chinese website YouKu.

The history of this idiom comes from a story about a woman named Liang. One day, there was a fire inside of her house while she was out. When she returned home, she noticed the house up in flames, and realized that her nephew and her own child were trapped in the house. She bravely ran into the burning house, attempting to save her brother’s child first. However, the smoke blocked her vision, and when she got outside it became clear that she had rescued her own child first. Afraid of being criticized for being selfish, she rushed back into the fire to save her nephew. Sadly, the fire was too strong, and Liang burned to death. Of course, everyone in the village knew about this tragedy. 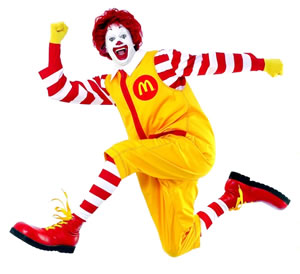 As such, this idiom is used today to describe something that is known by everyone. For example, when you punch it into the popular Chinese search engine Baidu.com, one of the pictures you get is of Ronald McDonald, or the “well-known McDonald’s uncle” (家喻户晓的麦当劳叔叔 -jiā yù hù xiǎo de mài dāng láo shū shu).

HERE’S another YouKu video showing the story of this idiom.

Smash those woks and boats!

This story dates back to the Qin Dynasty (秦朝 – Qín cháo) (221-206 BC) and the Battle of Julu (巨鹿之戰 – jù lù zhī zhàn). Leading the Chu (楚) rebel forces was a man named Xiang Yu (项羽 – Xiàng Yǔ). After crossing the Zhang River (漳河 – zhāng hé ) into enemy territory, he ordered his troops to sink all of the boats and destroy all of the woks. He provided his soldiers rations for three-days, and they headed out to battle. Knowing that victory was the only way for them to survive, his troops fought hard for many days and eventually won the battle.

This idiom is used to describe one’s undying resolve to achieve a goal. It’s similar in English to saying “cross the Rubicon” or “the point of no return.”

A clip from a Chinese movie depicting the story of this famous idiom.

Tags: break the woks and sink the boats, give up halfway, idioms, understood by everyone, well known, 半途而废, 家喻户晓, 成语, 破釜沉舟