It’s been a while, but it’s time for another installment of Chinese idioms, or 成语 (chéng yǔ). For this edition, we’ll look at three very different animals – a horse, a mantis, and a bird: 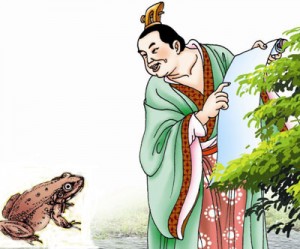 Not quite a noble steed...

Once upon a time, in the Spring and Autumn Period (春秋时期 – chūn qiū shí qí) (770-476 BC), there lived a man named Sun Yang (孙阳 – sūn yáng). He was an expert at judging horses (相马大师 – xiāng mǎ dà shī), and he wrote a book on the subject. People even called him Bole (伯乐 – Bó lè), the name of a celestial being that was said to be in charge of heavenly steeds. One day, his son decided to go out in search of a great steed. However, the boy had never actually seen a horse, so he just relied on the book. The boy was thrilled to find a creature with a protruding forehead, two bulging eyes, and four big hoofs – “It must be a great steed!,” he thought. Full of pride, he took the creature back to show his father. The boy said, “Dad, I’ve found a good horse, except that his hooves are not good enough” (爸爸，我找到了一匹好马，只是蹄子稍差些 – bà ba, wǒ zhǎo dào le yī pǐ hǎo mǎ, zhǐ shì tí zi shāo chà xiē). Sun Yang was unsure whether to laugh or cry, as his boy had brought home a toad (蛤蟆 – há ma). Sun Yang told him, “Son, this horse is not bad, but it likes jumping too much, and you can’t ride it!” (儿子，这马不错，就是太喜欢跳了，没法骑 – ér zi, zhè mǎ bù cuò, jiù shì tài xǐ huan tiào le, méi fǎ qí).

Meaning: To adopt a mechanical approach that is inflexible; doing things strictly by the book. 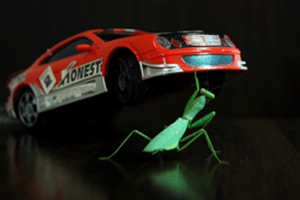 What a cocky mantis...

As this story goes, there was a very strong mantis (螳 – táng) who could destroy all other mantises in fights. Of course, this mantis got a little cocky as a result of this. One day, a coach was driving by on his horse carriage (马车 – mǎ chē). The over-confident mantis decided to raise his arms in an attempt to stop the rolling carriage. The driver ignored the stupid mantis, and kept driving straight (车夫没有理会这只愚蠢的螳螂，径直往前行驶 – chē fū méi yǒu lǐ huì zhè zhǐ yú chǔn de táng láng, jìng zhí wǎng qián xíng shǐ). Of course, the mantis was run over and killed as a result of his foolishness.

Meaning: Overstating one’s abilities and trying to do what is beyond one’s power. 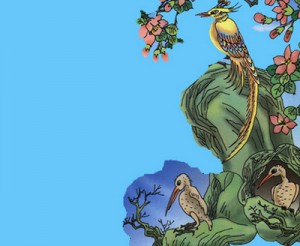 Atop of the famous Wutai Mountain (五台山 – wǔ tái shān), there lived a bird named Hanhao (寒号 – hán hào). In the summertime, the bird would be covered in beautiful, colorful feathers (羽毛 – yǔ máo). He would proudly sing out everyday, “The Phoenix is not as good as me!” (凤凰不如我 – fèng huáng bù rú wǒ). In the autumn, the bird would continue to sing loud and proud, while others would go about building their nests. Finally, in the dead of winter, even though the bird was really cold, he would not build his nest (它虽然很冷，但还是不搭窝 – tā suī rán hěn lěng, dàn hái shì bù dā wō). With his feathers shed, Hanhao was left shivering through the night. When the sun would rise, he would go right back to singing and dancing…

Meaning: Muddling along; being satisfied just to get through

Usage: This can be used to describe a person who dawdles the hours away with no plans for the future.

Tags: a mantis trying to stop a carriage, chinese idioms, judge a horse by the book, muddling along, 得过且过, 成语, 按图索骥, 螳臂当车