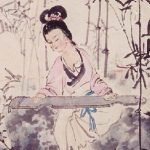 “Music produces a kind of pleasure which human nature cannot do without.”

Stillness of mind in seven strings. Harmony and heartbreak dance like fingers over a fretboard. That is the gǔqín or 古琴, in a nutshell. This string-plucked, Chinese musical instrument of the zither family is similar to a western harp, and is famous for its hallmark vibrato sound and wafting, low-toned melodies.

It’s name literally translates to “ancient stringed instrument” as it has been a mainstay of Chinese traditional music for millennia. The guqin sound resembles that of an American slide guitar or steel guitar, and is similarly played in a sitting position with fretboard facing up and the player’s hands on top. The guqin, with all its refinement and subtlety, has been traditionally favored by scholars and the Chinese intelligencia.

The guqin is famously associated with the ancient Chinese philosopher Confucius (孔子), who through his analects, proselytized the value of music and art in daily life. Confucius saw great benefit in playing the guqin, believing it would enrich one’s heart and bring peace of mind to the instrumentalist. To paraphrase in English, we say music “soothes the savage beast”. As a result, the guqin is often referred to by the Chinese as  “the instrument of the sages”. Only through mastery can you achieve harmonious sounds likes these:

The guqin is a very quiet instrument, with a range of only four octaves. Its lowest pitch is about two octaves below middle C (the lowest note on the cello). Sounds are produced by plucking open strings, stopped strings, and through harmonics (which are slightly muted strings that register octaves of lower notes). As previously mentioned, the use of glissando, or sliding tones, gives the guqin a sound reminiscent of a fretless double bass or a slide guitar. 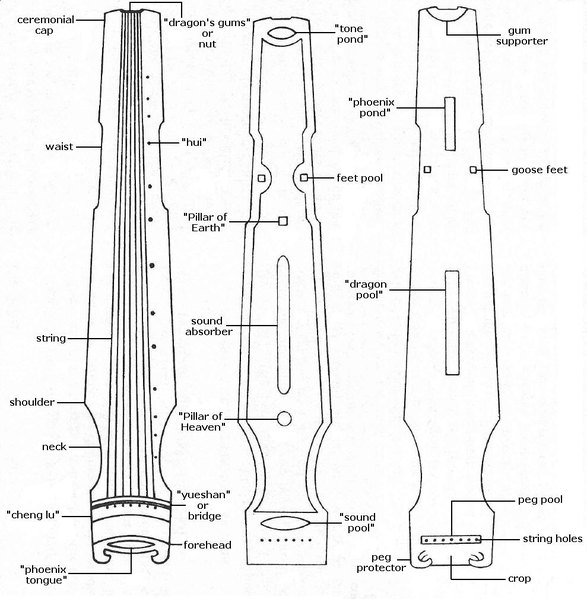 The guqin body is comprised of a singular hollowed body of wood, often arrowhead-like in shape. The strings of a guqin are traditionally made of spun silk, but nowadays have been replaced by stronger and cheaper nylon composites. The surface board is round to represent Heaven while the bottom board is flat to represent Earth. The entire length of the guqin is 3 chi, 6 cun and 5 fen thus representing the 365 days of the year. While the guqin produces beautiful sounds, the actual instrument is itself a work of art, function and form: 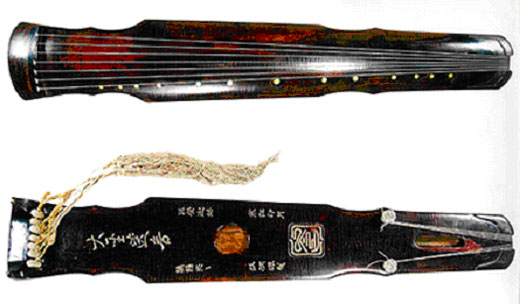 Whenever I hear a guqin, I think of kung-fu/westerns fights in a remote village or town far removed from civilization. Maybe it’s because I’ve seen the movie Hero, but for this same reason, the guqin sound instills feelings both of serenity and trepidation, like the quiet before a storm (or the stare-down before a showdown). In this scene from hero, the Guqin is used to demonstrate the “mental battle” between two opponents before they ever draw swords:

Then there is the less subtle usage of the guqin in contemporary pop culture. Check out these “Gu Qin Assassins” in this Kung Fu Hustle fight scene (minute 2:20 on). Apologies I could only find an English Dub: