The èr hú (二胡) is a two-stringed, bowed musical instrument affectionately called the “Chinese violin” or “Chinese two-stringed fiddle” by westerners.  If you have ever taken a walk down a crowded Chinese street, waited for a train in the subway, or enjoyed a weekend stroll through the park, you’ve undoubtedly heard the ear-piercing cry of the er hu.

Love it or hate it, the er hu is a staple of Chinese culture. It benefits as a very versatile instrument and is used in both traditional and contemporary music arrangements, such as in pop, rock, jazz, along with classical ethnic and Han chinese operas and performances. The trademark high-pitched and shrill sound of the er hu makes it a great solo instrument, but can also be used as a complement to large ensembles.

When in the wrong hands, it can perforate your ear drums and leave you feeling deaf and concussed. However, when played by a true er hu master, this little instrument can serenade you with its vibrance and tranquility:

The erhu’s roots in China date back more than a thousand years ago, and have since spread throughout China. It is believed to have evolved from the xiqin (奚琴), which was described as a foreign, two-stringed lute in Yue Shu. It is the most popular of the “huqin” family of traditional bowed string instruments and is now most commonly played by various ethnic groups of China (from Xinjiang to Sanya).

The er hu’s design consists of a long stick-like neck, with two large tuning pegs stretching two strings to the top. Attached to the bottom of the neck is a small resonator body (like with an acoustic guitar) which is covered with python skin on the front (playing) end. Two strings are attached from the pegs to the base, and a small loop of string (qian jin) placed around the neck. The “soundboard” pulls the strings towards the skin, holding a small wooden bridge in place. See diagram below for basic construction of an er tu: 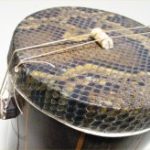 The er hu’s simple design is also what makes it such a unique instrument. The er hu’s characteristic sound is produced through the vibration of the python skin (covering the base of the violin). There is also no fingerboard as the player applies light pressure onto the strings without the strings ever touching the neck.

The bow (made of horse hair) is never separated from the strings and instead it passes between the two strings as opposed to over them (as with western violins). Lastly, although there are two strings, they are very close to each other and the player’s left hand in effect plays as if on one string.

Proper playing position of the er hu has the resonator placed between the player’s legs, in the crotch. The bow hand rests close to the hip while the playing hand remains elevated around shoulder height. Here’s a standard er hu song in the Chinese tradition: