Happy New Year everybody! To help you celebrate, here are some Chinese New Year greetings for the 2017 calendar year and for the year of the rooster! 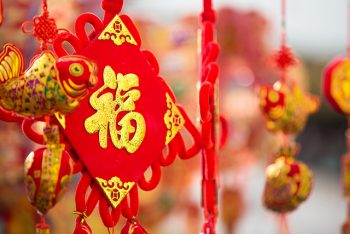 Edmonton Chinese New Year 2015 by IQRemix from Flickr.com is licensed under CC BY-SA 2.0

恭贺新禧 Gōnghè xīnxǐ = It’s a the traditional way to wish happy Chinese New Year. 恭贺 is a polite verb meaning to congratulate. 禧 is a pretty rare word, meaning festivity, joyous occasion. Together with 新 it’s referred to the New Year. So 恭贺新禧 is the polite, formal, traditional way to say 新年快乐.

恭喜发财 Gōngxǐ fācái = Unlike the greetings above, 恭喜发财 is not a general blessing, but a more specific one. 恭喜, like 恭贺, is a polite verb meaning to congratulate. 财 by itself is a noun, meaning wealth, capital.发财 is a verb, meaning to get rich, to make a fortune. The desire to become wealthy is not something the Chinese are shy about. They need the money to eat, to survive. They need the money to fulfill their filial duties and to ensure the best life for their child. This is way everyone hopes to be the one to bite the lucky dumpling during Chinese New Year Eve. The dumpling with the hidden coin inside is an auspicious symbol for the hopefully coming fund. This is way 恭喜发财 is the most popular greeting during Chinese New Year.

年年有余 Nián nián yǒuyú = This greeting is the reason the Chinese eat fish at New Year Eve. Only because the pronunciation of 余, meaning more, over, excess, is similar to the pronunciation of 鱼, meaning fish. 年年 means every year, year after year. 有余 means have a surplus, have enough and to spare. Wishing someone 年年有余 is wishing him to have everything he needs and more.

岁岁平安 Suì suì píng’ān = 岁is a noun for year in written language.岁岁, like 年年, means every year, year after year. 平安 means peaceful, safe, well. To wish someone 岁岁平安 is to wish him safety and peace in the coming year. This greeting is also a byword for good luck whenever someone awkwardly breaks something. Because 岁 and the Chinese verb to break, 碎, are homophones. In this way the Chinese replace the shattering to pieces in an auspicious saying.

万事如意 Wànshì rúyì = 万 means myriad, 事means matter, and together万事 means all things, everything. 如 is a verb, meaning to be like something, to be as something. 意 is a noun for desire, intention. 如意 together means to be like one wishes, to come one’s way. 万事如意 is wishing someone that all his desires will come true.

万事大吉 Wànshì dàjí = 吉means lucky, auspicious. Like in the name of 吉林 province in the north of China. 大 as adverb means very, extremely. To wish someone 万事大吉 is to wish him best of luck in everything he is doing.

吉祥如意 Jíxiáng rúyì = 吉 and 祥 are synonyms, only 祥 is less common word. 吉祥 together means propitious, fortunate. And 如意 as we mentioned above is to be like something. So 吉祥如意 is to wish someone best of luck. This greeting is less common in spoken language and more prevalent in calligraphy, painting and paper cutting.

All of the greetings above- except for 新年快乐 – are traditional Chinese greetings. You can use them to bless anyone, from relative at New Year dinner to a stranger on the street. They appear frequently on New Year cards, banners and doors decoration, but they are also commonly used in spoken language (吉祥如意 is exempt). There are endless ways to bless someone, especially if you know him. For examples of personal greetings, watch this short episode of 快乐汉语 :