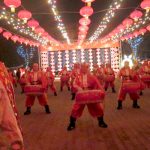 Percussion is the oldest form of non-vocal music, and as a result, reflects many of the social and historical peculiarities that evolve throughout a culture. In China, traditional drumming is associated with pomp, circumstance and jubilation. It is a hallmark of prosperity and celebration, uniting people through collective rhythm and tempo. As China continues to revisit its ancient culture, Chinese traditional drumming or 传统鼓乐 is once again becoming popular in the mainland and even abroad.

The character for drum,  鼓 (gǔ), is often preceded by a modifying adjective that reflects the size of the drum, how it’s played (one hand or two) or where it’s from. Chinese drums are usually a simple construction of stretched hide over a hollow vessel. Most traditional drums are played with two bamboo sticks tapering at the ends. Due to the celebratory nature of Chinese drumming, both instrument and instrumentalist are often decked out in ornate cloth and attention-grabbing colors. During a performance, a drummer often participates in choreographed movement and chanting to engage and entertain the audience further. 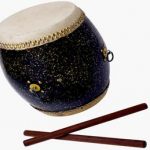 Chinese drumming, like most things Chinese, is a group activity, often involving 10 or more percussionists in the group. While similar to Western notions of “drum circles”, these groups often follow a very prescribed and choreographed routine, providing one aspect of the rhythm to the overall beat. In this sense, Chinese drumming is a collective action, kind of like a marching band’s percussion section. Aside from adding complexity to the rhythm, other players are often used to add “volume” and “presence” to the performance, which to me means that they’re simply acting as amplifiers (historically this has been the case).

Nowadays, drumming is used primarily for lavish festivities, including weddings, historic dates and significant national holidays. After celebrating this past Mid-Autumn Festival (中秋节), I’m sure your ears are still ringing from the non-stop crackle of fireworks and symphony of drummers outside your window. Yet to understand how the use of traditional drumming became so prevalent in Chinese celebration culture, we must first look back to the history of Chinese drumming in ancient times.

The earliest known drums in China date back nearly four thousand years ago, around the time of the Shang Dynasty (c.1600 – c.1100 BCE). Most drums were crude constructions of animal shells, skins and clay/wooden composites. The most famous of these drum artifacts are comprised of tortoise shells, alligator and snake skins, which were popularized by ethnic groups and merchants along the Silk Road.

Historically, Chinese drums have been used in celebration and in conflict. As a result Chinese drums are often the color red which has long time been associated with power and luck, and accordingly, red drums have been used as a symbol of strength for rulers and armies. In combat, Chinese troops used tàigǔ drums to motivate troops, to help set a marching pace, and to call out orders or announcements among massive armies without modern communication technology. In fact, during the war between Qi and Lu in 684 BC, the effect of drum on soldier’s morale was supposedly employed to change the result of a major battle and scare their enemies into submission (ancient documents cite rolling thunder emanating from approaching Armies–that would scare me too back in the day).

Such instruments are also used in ceremonies such as weddings and other festivities. A booming set of drums is often the backdrop to an important celebration and in some case can be taken to extremes. Just take a look at the 2008 Beijing Olympics Opening Ceremony. There must be thousands of drummers all marching to the beat of a single drum: