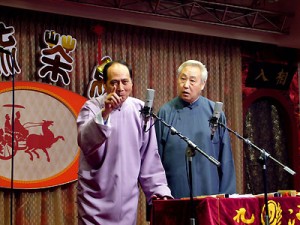 In America, we have a thing called stand-up comedy. This popular form of entertainment consists of a comedian literally standing up at the front of a club, grabbing a microphone, and telling jokes for a while. Stand-up shows vary from the tiny hole-in-the-wall club where amateurs try to catch a break, to huge shows in big theaters with famous comedians. Topics range from politics, to love, to the absurd, and stand-up comedians are known to use dirty language and tackle racy topics. Of course, comedy is popular in Chinese culture as well, but the performances are quite different from the style in the US. In China, it’s called cross-talk (相声 – xiàng sheng), which literally means “mutual voice” and usually involves two guys engaging in an entertaining dialogue.

An interview with a young French guy who performs cross-talk in China.

It’s believed that xiang sheng developed sometime in the Qing Dynasty as a bit of a spin-off of the imitation shows that were a popular form of entertainment in the Song Dynasty. After the PRC was established in 1949, this comedic art became more and more popular. Today, it’s heavily featured in the CCTV New Year’s Gala (春节联欢晚会 – chūn jié lián huān wǎn huì) program and countless other performance shows in China. Jump into a cab in Beijing, and chances are your driver will be listening to a radio broadcast or an old bootleg tape of a cross-talk performance.

There are four skills that are essential in cross-talk: speaking (说 – shuō), imitating (学 – xué), teasing (逗 – dòu), and singing (唱 – chàng). Most of the time, it is performed with two actors – one serves as the lead actor while the other plays a support role. However, sometimes it is performed simply as a monologue, and at other times there are numerous actors. The humor involved in crosstalk is, for the most part, satirical. The language is snappy in delivery and rich in puns and word-plays.

These days, more and more foreigners are becoming interested in studying the art of cross-talk. After all, if you can master the art and get a rise out of Chinese audiences as a 老外, you’ll have pretty good job opportunities as a TV host. Just look at Canadian Mark Roswell, who goes by Da Shan (大山 – dà shān – literally “Big Mountain”) in Chinese. Relatively unknown in his home and native land, Da Shan is a superstar here in China, as his ability to master a traditional Chinese performing art has left audiences in awe for many years. For other foreigners such as myself who are constantly told things like, “Your Chinese is pretty good, but not as good as Da Shan,” the guy kind of irks us a little bit. That being said, I’ll admit that he is incredibly talented and very good at what he does.

A solo bit by Da Shan.

Perhaps the new foreign crosstalk hero will be Jesse Appell, a student at Tsinghua University on a Fullbright scholarship studying the comedic art. His new hit viral video, “Laowai Style,” is a hilarious spin-off of the Internet sensation out of Korea, “Gangnam Style.” Sang in Chinese, the song takes a funny look at the life of a foreigner in Beijing. Having lived here for over three years myself, I must admit it’s pretty accurate.

From the traditional performances and the old-school masters, to the new animated videos and successful foreigners wowing audiences across the country, crosstalk is a huge part of Chinese culture and it appears as if it’s only getting bigger.