A while back, we introduced China’s Five Great Mountains. Well, there’s more to China’s mountains than just those five, so today we’ll take a look at the Four Sacred Buddhist Mountains (四大佛教名山 – sì dà fó jiào míng shān) as well. After all, a big part of Chinese culture is making a pilgrimage (朝圣 – cháo shèng) to one of these mountains. As such, don’t be surprised when you see a huge crowd of people there when you visit! Let’s take a closer look at each of these sacred mountains individually: 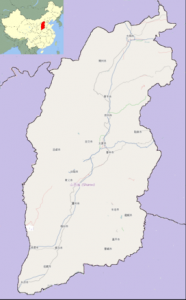 Mt. Wutai on the map.

Located in Shanxi province, Mt. Wutai (五台山 – wǔ tái shān – lit. “five platform mountain”) is believed to be the home of the Bodhisattva of wisdom, known as Wenshu (文殊 – wén shū) in Chinese. The name comes from the fact that there are five rounded peaks, of which the northern is the highest. It is home to 53 monasteries, which were declared a UNESCO World Heritage Site in 2009. Wutai is thought of as the first of the Four Sacred Buddhist Mountains, as it was identified before the others. The reason that Wutai was designated as a holy mountain was a description in the Avataṃsaka Sūtra (华严经 – huá yán jīng), a holy book that said Wenshu lived on a “clear, cold mountain in the northeast.” Actually, it’s believed that Wenshu often appears on the mountain, either in the form of a person such as a monk, or more often in the form of multi-colored clouds. 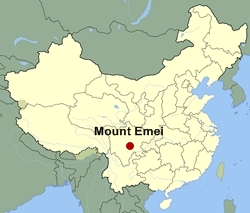 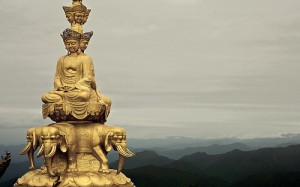 Down in Sichuan province, you’ll find Mt. Emei (峨嵋山 – É méi shān). Standing high at 3,099 meters, this is the highest of the four Buddhist mountains. Don’t worry, though, as there is of course a cable car at the mountain that can take you to the top to enjoy the views without the pesky discomforts of actually climbing it. If you choose to walk the 50 km winding path, be aware that it takes several days. In terms of its spiritual significance, Emei is regarded as the place of Samantabhadra’s enlightenment. This bodhisattva is known as Puxian Pusa (普贤菩萨 – pǔ xián pú sà) in Chinese. Construction of Buddhist temples began here way back in the first century, and today there are 76 monasteries from the Ming and Qing periods. It’s not only Buddhism that is important here, though, as some sources also allude to the practice of kung fu here.

The Yellow Mountain isn't the only mountain in Anhui. 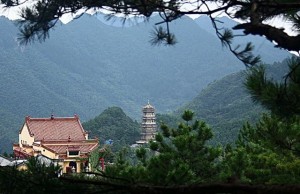 Moving right along to the 3rd mountain, we find ourselves in Anhui province at Mount Jiuhua (九华山 – jiǔ huà shān – lit. “nine glorious mountains”). Although it isn’t so well known, thanks to the fact that Anhui province is most famous for its Yellow Mountain. The mountain has had other names in the past, but the current name stuck when a poet named Li Bai (李白) wrote, “Magic is divided to two branches, sacred mountain generates nine glories” ( 妙有分二气，灵山开九华 – miào yǒu fèn èr qì, líng shān kāi jiǔ huá). As far as its holiness, many of the mountain’s temples and shrines are dedicated to the bodhisattva of the hell beings, known in Chinese as Dizang (地藏 – dì zàng). As the story goes, a Silla prince visited the mountain and eventually died there. It’s said that his body did not decay, so he was believed to be a reincarnation of the bodhisattva. There are over 70 peaks, with more than half of them exceeding 1,000 meters. Currently, there are 99 temples and over 1,000 nuns and monks. Mt. Jiuhua is also famed for its beautiful natural scenery, with peaks, valleys, waterfalls, and more. 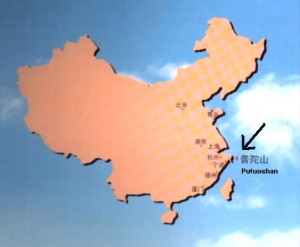 A mountain on an island. 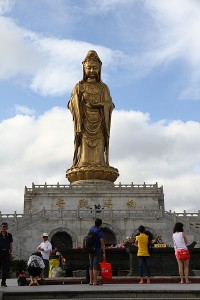 The fourth and final sacred Buddhist mountain actually takes us to an island. Mt. Putuo (普陀山 – pǔ tuó shān) is part of Zhoushan (舟山 – zhōu shān, a prefecture-level city composed solely of islands. It’s believed to be the bodhimaṇḍa (道場 – dào chǎng), or “position of awakening” for the bodhisattva of compassion, known as Guan Yin (观音菩萨 – guān yīn pú sà) in Chinese. Tons of people flock here on the 19th day of the 2nd, 6th, and 9th months of the lunar calendar for special ceremonies commemorating special events in the life of Guan Yin. There are three major temples here, with a bunch of other smaller temples and even a large Buddhist institute on the grounds.

We’ve covered most of China’s legendary mountains, but we’ve still got a few more left. Stay tuned to the blog for our final post about the sacred mountains of China, when we’ll take a look at the Four Sacred Taoist Mountains. In the meantime, check out the many ways we can help you learn Chinese.