China is a huge country with a wide variety of landscapes and terrain – from the deserts of Xinjiang, to the grasslands of Inner Mongolia, the concrete jungle of Beijing, the beaches of Hainan, and the rice paddies of Guangxi, China just about has it all. Of course, there are also countless mountains scattered throughout the country. When it comes to China’s Sacred Mountains, however, they can be broken down into three distinct groups. For today’s post, we’ll begin with the heavy hitters, the most famous of all China’s mountains:

These are the most renowned mountains in Chinese history, and over the centuries numerous Emperors have made pilgrimages to them. Although they’re not distinctly Buddhist or Taoist, strong influences of both religions (especially Taoism) can be found at these mountains. According to Chinese mythology, these mountains originated from the limbs and head of Pangu (盘古 – pán gǔ), the first living being and creator of all. Way back in the Warring States Period (战国时代 – zhàn guó shí dài), they were arranged according to the five cardinal directions: north, south, east, west, and center. 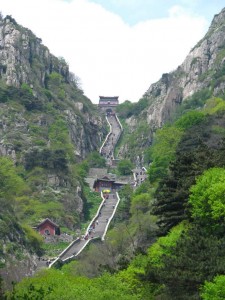 A couple of 老外 making the dangerous trek around Hua Shan. 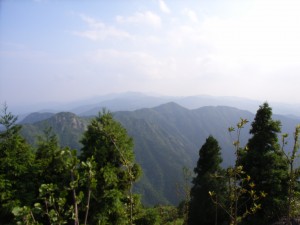 View from the top of the Southern Mt. Heng 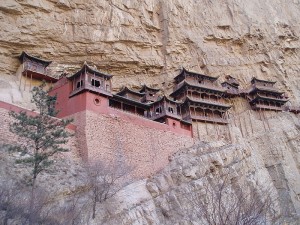 That temple is hanging alright...

http://www.youtube.com/watch?v=Wy2SbxKP6Y8
A video journey to the Hanging Monastery. 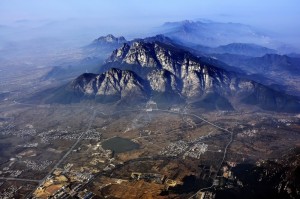 http://www.youtube.com/watch?v=ouhBA8_If0k
A history of the Shaolin Temple (in Chinese with subtitles).

Keep an eye on the blog in the future, as we’ll also cover the Four Sacred Mountains of both Buddhism and Taoism. In the meantime, make sure you’re learning a new Chinese word every day.