Culture Shock in China – Getting Around Posted by sasha on Jul 27, 2013 in Culture

When traveling to or living in a country that’s very far away and very different from your own, some culture shock is inevitable.  So far, we’ve discussed the culture shock in China related to eating and drinking.  Today, we’re going to talk about another everyday topic – getting around. 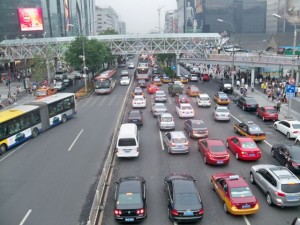 A typical scene on Beijing roads.

When I first arrived in Beijing back in August 2008, a van was waiting at the airport to escort me and some other guys from the group to our apartment.  We were all exhausted and jet-lagged from the long trip, but the adrenaline rush of being in China kept us awake and talking.  It was a long ride, but we managed to make it in under an hour.  This was thanks to the fact that our driver was a complete maniac – gunning it every chance he got, swerving in and out, and completely ignoring any kind of road etiquette whatsoever.

Fearing for our lives, we were excited to hear that the exit was approaching.  Of course, our driver blew right past it.  “Oh well,” I thought.  “We’ll just get off at the next exit and turn around!”  Not so fast.  After all, this is China (TIC).  Our driver flipped the van into reverse, and sped backwards, on the freeway, until he got to the correct exit. As you can imagine, my first experience with getting around in China left a lasting impression. 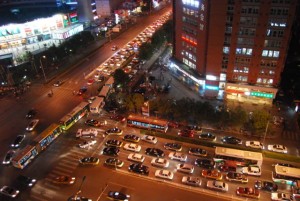 When it comes to driving in China – especially in the big cities – it is complete and utter chaos.  Green means go and red means stop, but yellow does not mean slow down.  It means speed up and get through.  When a light does turn green, the cars coming straight through have to wait while other impatient jerks make a quick dash to turn left.  Neither cyclists nor pedestrians have the right of way, as cars weave in and out of bike lanes and make turns quickly without even looking.  You’ll often see cars going the wrong way down a road, parked on the sidewalk, or making the classic “U-turn from the far right lane” move that is so popular here.  In short, it is a miracle that there aren’t thousands of accidents a day in Beijing.

If you thought cars were bad, just wait till you get a load of the buses here.  Bus drivers try their best to get through their route quickly, and they have no patience for anyone or anything that is in their way.  If you see a bus coming, don’t assume that they will stop for you – you’ll be road kill before you know it.  Cab drivers are just as bad, if not worse.  Driving around Beijing for 12 hours a day will do that to you, I guess. 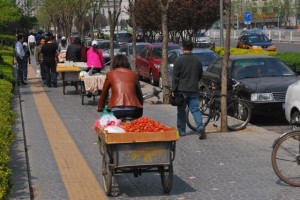 Vendors speeding away from cops on the sidewalk.

No matter where you are and what kind of vehicles are around, get used to hearing the constant sound of car horns blaring.  Chinese people honk before they pass to warn you.  Then they honk while they are passing to make sure you know you were going too slow.  Finally, they give you one more victory honk after they have passed as a big “F you!”  Beijing during rush hour is a symphony of car horns that goes on for hours and hours. 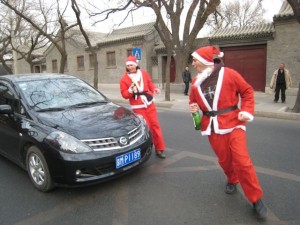 Santa causing trouble just like a good pedestrian in Beijing.

So the drivers are nuts, but how about the cyclists and pedestrians?  They must at least be pretty good, right?  Nope.  Traffic lights mean nothing to people walking around in China.  Even with a constant stream of cars, taxis, and buses speeding towards them, they ignore the fact that the light is red on their side and continue to walk into the middle of the street.  This, of course, causes cars to slam on their breaks and their horns, and it just makes everything that much worse.  Meanwhile, you’ve got entire families flying up the road on the wrong side on electric bikes – dad driving, mom on the back, and child clutching on for dear life.  Naturally, none of them are wearing helmets.  Then there are the rickshaw drivers and people on carts who are selling street food or transporting junk.  In conclusion, it is complete and utter chaos out on the streets here. 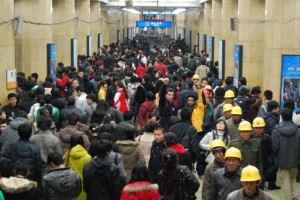 Beijing subway during rush hour. Can you spot the two 老外?

With all this madness out on the road, you’re probably better off heading underground to take the subway, right?  Not so much.  Although there are plenty of subway lines, they are still not even close to enough for the massive population.  As such, you will find huge crowds any time of day.  There are plenty of ads and announcements in subway stations reminding people to “be civilized,” “stand behind the yellow line,” “first get off, then get on,” and “give up seats to those in need.”  The Beijing subway, however, is far from civilized.  As soon as those doors open, people begin pushing their way on.  Be prepared to throw some elbows if you want to get a seat, let alone get on the subway at all.

A video tour of the Beijing subway during rush hour.

One particular experience comes to mind that really gave me a jolt of culture shock in Beijing.  It was about 5 o’clock in the morning, and some friends and I had just drunkenly feasted on McDonald’s breakfast after a night of epic revelry.  We were back in our neighborhood – which was at the time the slums of Beijing – and we were waiting for the bus.  There was a large crowd of elderly Chinese folks gathered with us, and they seemed very anxious while waiting for the bus to arrive.  A few minutes later, an empty bus rolled up; there were clearly enough seats for everyone to get a spot and then some.  Despite that obvious fact, it was a mad dash as soon as the door opened.  Chinese grandmas and grandpas were pushing, shoving, and yelling at each other.  We just sat back, laughed, and watched the melee unfold.  Of course, by the time it all wound down, everyone was comfortably seated on the bus.

You can’t even avoid traffic jams on the water in this city.  Head to Hou Hai lake to rent a boat, and be prepared to get stuck going under the bridge as the people in five other boats try to jam theirs through at the same time. 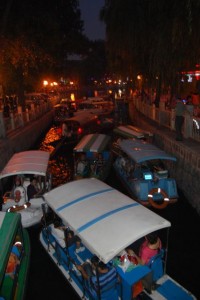 Traffic jam on the lake.

If it’s this bad in the city, certainly it must be better when you get out on a train journey, right?  Not so much.  Getting through security and the ticket check at Chinese train stations is always a battle, and you’d better be prepared for an intense couple of minutes when they finally open the gates and let people on.  Even though seats are assigned, it’s a fight to the finish with everyone scrambling to get on first. 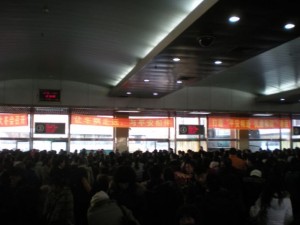 Chaos of a Chinese train station.

Well, that’s just the migrant workers and other less-educated people on the trains, right?  It has to be better in the airport and on planes.  Wrong again.  The same fight ensues to check in, get through security, and board the plane.  When it comes time to land, every Chinese person and their mother thinks they are clever by standing up to grab their bags before the plane has landed.  I can’t tell you how many times we’ve seen flight attendants argue with passengers who try to get off the plane before it’s even on the ground.  One time, we saw a guy straight up eat it as he fell forward on the plane while he was trying to get his luggage first.  Serves you right, jackass.

Whether you like it or not, you’re going to have to take some form of transportation at some point here, so you’d better get used to it and adapt to the local ways.  After four years of living here, I honk my motorbike horn and yell “You stupid asshole!” right back at the cab drivers.  I also push and shove to get on the bus and subway, and I’ll wrestle you for that empty seat if it comes down to it.  Instead of getting frustrated every day, it’s better to just accept the reality that things are done differently here than they are wherever you are from.  Culture shock is inevitable, so don’t let it drive you crazy!