Eating Bitterness at Shaolin (吃苦) Posted by Stephen on May 20, 2012 in Uncategorized 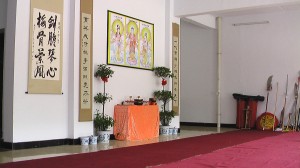 Many people have asked about my experience studying kungfu at Shaolin first hand (体验生活－tǐ yàn shēng huó), so here’s a in-depth look at what the Shaolin hustle is all about. While prior to my stay, I had very little experience in Shaolin kung-fu styles and methods of training and was quickly thrown into a sink or swim situation with my trainers. It was tough. Each day was  challenge. Yet that being said, my time spent as a Shaolin student was one of the most unforgetable and enjoyable moments of my life even amidst all the hardship and pain. Here’s the abridged story:

I arrived at the Zhengzhou Train Station amidst chaos and confusion. After having my suitcase yanked out of my hand by a man claiming to help me carry it, my new peng you, I nearly had to put my pre-Shaolin training to good use, as the man insisted upon me paying 25 kuai for his unwanted help. Two seconds off the train and I was already being singled out as a bumbling foreigner. 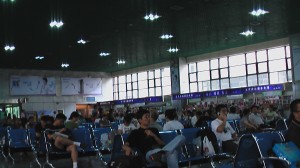 Not off to a good start and it was only getting worse. I had no way of contacting the kung fu school, and had no idea of the name of the people meeting me. I did have the fact that I was the only caucasian in the train station on my side, but even in Zhengzhou, that was like finding a needle in a haystack. Hours passed with me pacing back and forth across the parking lot, waiting stations and outside square. Had I been cheated by my travel agent? Where was my ride?

Realizing that I wasn’t sticking out as much as I’d hoped, but I did notice a group of people practicing taichi (太极拳－tài jí quán). I figured this was as good a time as any to get in some practice, so I joined the group and within minutes I had an audience watching my every incorrect move. After a couple of rounds, my ride materialized out of the crowd, grinning cheek to cheek. He ushered me towards a little Datsun where we were met by a teen monk. We crammed into the car and were off puttering up the mountains. 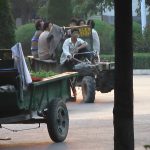 A 拖拉机 or three-wheeled tractor.

We had made it about 20 km, pumping terrible techno music and playing twenty questions when a three wheeler ignored a red light and drove into the intersection right in front of us, causing my driver to slam on the breaks. We skidded half way through the intersection managing just to glance the back of the tuō lā jī 拖拉机 as it chugged along. My driver, Jiang, and the other monk, Jia, both leaned out the windows and yelled some obscenities as the three wheeler slowly and comically escaped.  The two monks saw the look of fear on my face, patted my on the back and burst into laughter. For the rest of the ride my heart felt as though it was in my throat.

After arriving at the school, I was introduced to the other monks, our cook/cleaner and two other foreigners that had arrived the day before. One was Italian and the other British. Neither spoke a lick of Chinese. It became obvious that I was the designated translator. After a highly greasy meal (which would be essential as the weeks wore on), I was shown to my room–a wooden cot with an electric fan next to it. Then I was given a lecture on not using running water unless absolutely necessary. The toilet was a hole in the ground with the most god-aweful smell I’ve ever had the misfortune of sniffing wafting through the hallway. Welcome to the Shaolin way! 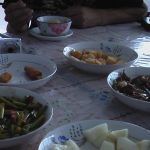 I awoke the next morning at 6 am to screams through the hallway calling us to breakfast. The monks here had a weird habit of waking up early for breakfast and then napping or vegitating out in the remaining two hours before our first session of training begins at 8 am. As it turns out, they were trying to digest the food before morning’s workout began. I didn’t pick up on this until my second day of training. Rookie mistake.

Training began with a “run up the mountain” which to be fair was only a 3 k up-hill run, but still taxing in the 34 degree celcius weather and stiffling humidity. Then began jibengong (基本功－jīběngōng) or “the basics” which almost every monk does everyday for at least two hours. The aim of these exercises is to promote flexibility and basic motions require for all Shaolin kung fu styles. Here an example of jibengong:

Afternoon sessions were similar to morning, but would focus on a a specific routine using both weapons and your limbs. It would usually last 3 hours long (from 2-5pm) and would finish with another run, jibengong and a series of leg exercises. My least favorite of which was the dreaded Horse Stance. Imagine having to hold this pose for ten sometimes twenty minutes straight, all the while having a trainer correct you by smacking you, kicking your legs or even putting their full weight on on your back:

After two days had passed, I was sore everywhere. I couldn’t eat enough food at breakfast, lunch or dinner to satiate my roaring appetite. Walking up the four flights of stairs to get to my dorm room was a reminder of how out of kung fu shape I was. Unfortunately I had one more lesson to learn.

The next day on our morning mountain run I slipped on a jutting rock and managed to roll my ankle up something fierce. Jiang insisted that I run it out, which meant another painful half km back to the training grounds. By the time I got there, my ankle was the size of a softball. I told Jiang I couldn’t do jibengong, and that I needed to ice and 休息 (rest). This is when I became familiar with the phrase “eat bitterness” or 吃苦 (chī kǔ). Jiang, while impressed by the size of the swelling, told me that here you cannot shy away from bodily pain. I could ice and “take medicine” for the next hour, but by afternoon he expected me to fully participate in the run, jibengong and Horse Stance drills. I told him I doubted I could stand on it by then. His response: “We all must eat bitterness here, you must too”. 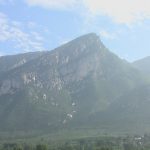 Unable to find ice, I settled for a few ice cream bars and a couple of ibuprofen. But the monks kept telling me to “take medicine”. I told them I did, and they said “chinese medicine”. Our cook then proceeded by buy a bottle of baijiu (白酒), gave me a small swig and then poured it into a bowl and lit the bowl on fire. While the small blue flame burner she quickly and vigorously rubbed the hot fluid on my ankle, while pulling on it. It was an excruciatingly painful ordeal, and by the time she was done I was minus a good chunk of leg hair.

Then almost miraculously the pain turned to numbness. What was in that bottle of 白酒？I could walk on it, run and even do jumping kicks within hours. Sure it still hurt somewhat, but I wrapped up my ankle and took to the hills and toughed it out through the afternoon session. While Jiang did single me out and pick on for a lot of exercises that day, he later told me it was “necessary” for my training. When pressed further, he just told me to rest up for tomorrow because “it hurts more the next day” with a sadistic smile.