Exploring Jiuzhaigou Posted by sasha on Oct 5, 2017 in Uncategorized

After you’ve spent a few days in the big city of Chengdu, you should definitely keep your Sichuan trip going and head to a few of the amazing national parks in the province. The most impressive is definitely Jiuzhaigou (九寨沟 – jiǔ zhài gōu). With colorful lakes, rushing waterfalls, and epic mountains, it’s one of the most beautiful places in all of China. In this post we’ll learn more about Jiuzhaigou, starting with the name. 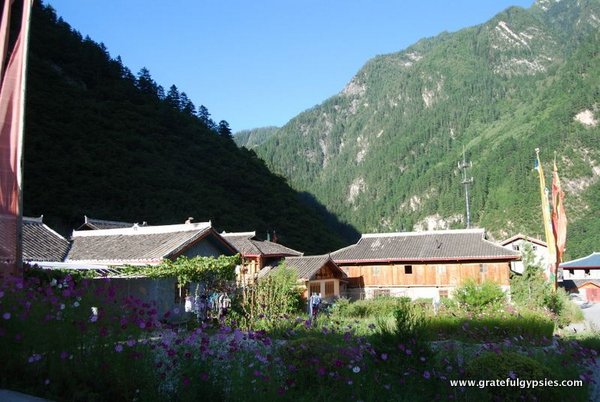 One of the Tibetan villages that is less touristy.

The name means “Nine Village Valley,” as there are actually nine Tibetan villages along the valley. For a long time, this area was inhabited solely by Tibetan (藏族 – zàng zú) and Qiang people (羌族 – qiāng zú) and it was quite inaccessible and unknown. Only seven of the villages are still inhabited, with locals now relying heavily on tourism thanks to a ban on agriculture in the nature reserve. 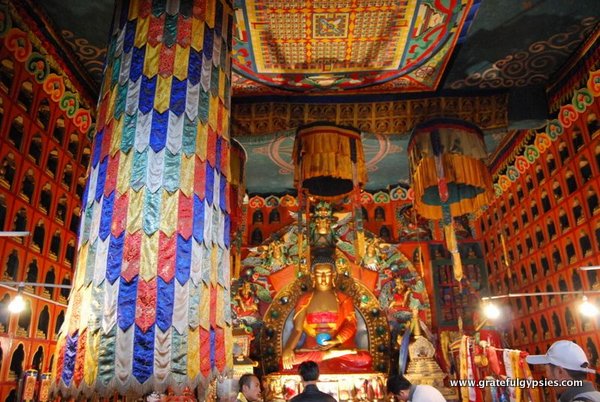 Checking out a temple in one of the villages.

A few of them are firmly on the tourist trail in the park and are full of teahouses, restaurants, and souvenir shops. Others are a bit more remote (that is to say you have to walk there and not get dropped off by the bus right out front), so you’ll want to check those out if you want a more authentic experience. 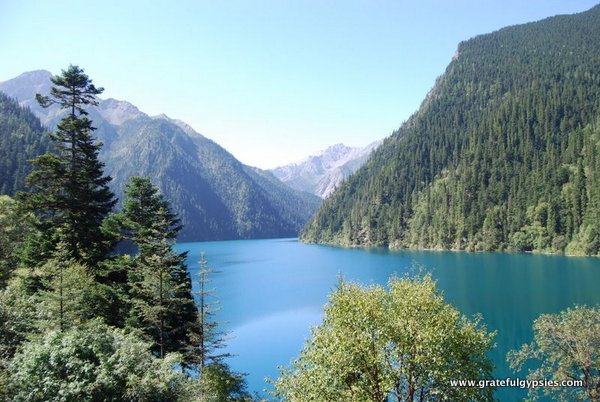 Stunning landscapes around every corner.

Jiuzhaigou is located in the far north of Sichuan, about 425 kilometers away from Chengdu. The park lies at the southern end of the Minshan mountain range (岷山 – mín shān) and it covers an area of 720 km². It’s actually composed of three different valleys that make a Y shape – Rize (日则沟 – rì zé gōu), Zechawa (则查洼沟 – zé chá wā gōu), and Shuzheng (树正沟 – shù zhèng gōu). The altitude in the scenic area ranges from around 2,000 to 4,700 meters. Jiuzhaigou is home to thousands of plant species as well as hundreds of species of wild animals. Although extremely rare, there are giant pandas (大熊猫 – dà xióng māo) and golden monkeys (金丝猴 – jīn sī hóu) here. 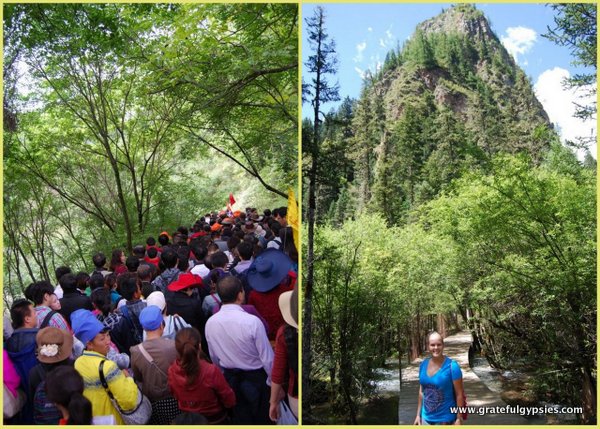 Which way would you go?

As the park is absolutely massive, you have no choice but to purchase a ticket for the tourist bus to get around. The bus drops off at some of the most famous scenic areas, which are usually packed with selfie-snapping tourists and flag-following, matching-hat wearing tour groups. If this makes you cringe, never fear – it’s very easy to escape the crowds at Jiuzhaigou. Connecting several of the areas are boardwalks through the forest. On our visit, we tried to stick to these as much as possible and barely bumped into any other tourists along the way. You’ll still fight the crowds at the viewpoints, but you’ll be able to enjoy some peace and quiet out in nature a few minutes later – a rare opportunity in the world’s most populous nation. 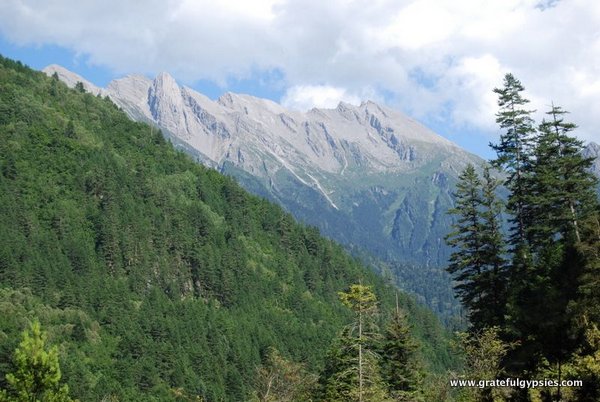 There’s so much to see here that there’s absolutely no way to cram it all into one day. Unfortunately, returning for a second day means buying another pricey entrance ticket as well as another bus ticket. As such, it’s best to do a bit of research beforehand and plan a route based on the places you’re most interested in seeing. Or you can just wing it, as you’ll still see tons of postcard worthy landscapes no matter which way you go. 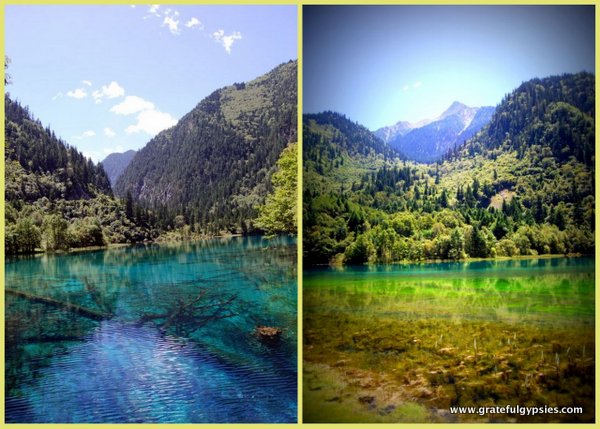 It’s hard to believe these are real.

Perhaps the best known feature of Jiuzhaigou is its stunning colorful lakes. Throughout the park, you’ll see blue, green, and turquoise lakes that you can see straight to the bottom of. Take one look at the Five Flower Lake (五花海 – wǔ huā hǎi) and you’ll see why Jiuzhaigou is often described as a fairytale landscape. 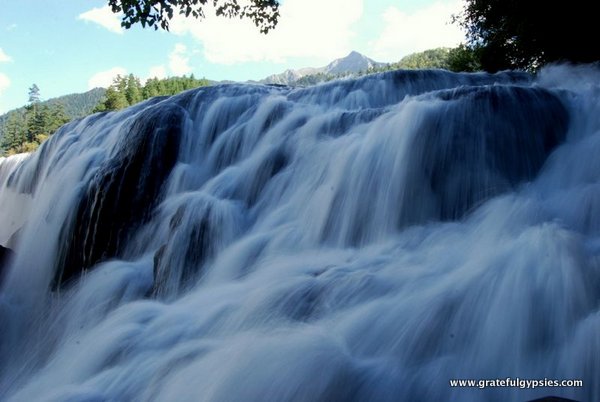 One of several waterfalls.

In addition to the lakes, there are several huge, cascading waterfalls. The Nuorilang Falls (诺日朗瀑布 – nuò rì lǎng pù bù) are an impressive 20m high and 320 wide, and are a famous symbol of the park. 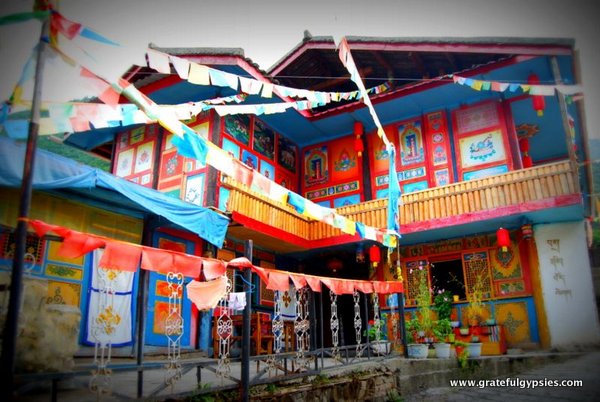 With the rapid development of tourism to the area, there’s no shortage of places to stay here. Even international hotel chains such as Sheraton have opened up shop. For a more authentic visit, though, you’ll want to base yourself at one of the many colorful Tibetan guesthouses. If you’re traveling during the summer or Chinese holidays, be sure to book well in advance. 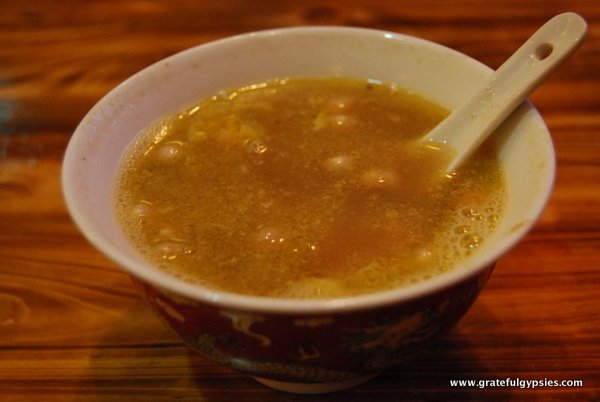 While you’re here, you might as well try some of the local food and drink. Yak meat jerky is all the rage, as is yak butter tea (酥油茶 – sū yóu chá). It may sound a bit gross, but it’s actually really tasty and is also an important part of Tibetan life. Plus, it quickly warms you up on a chilly evening. 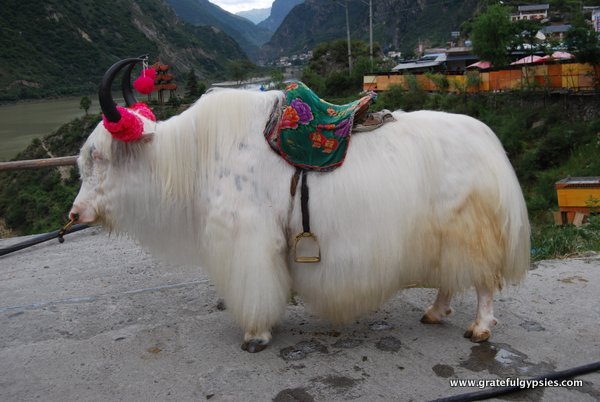 Most visitors get to Jiuzhaigou by bus from Chengdu. It’s a long trip on winding mountain roads that takes around 8-10 hours. There’s an airport here, but it’s still a good hour and a half away from the park entrance. There are direct flights from Chengdu and Chongqing, as well as a few other major cities in the summer months. On our visit, we took the bus up there, then checked out Huanglong and flew back to Chengdu.

Sadly, a 7.0-magnitude earthquake struck Jiuzhaigou this past August. Several people died and hundreds were injured as a result. It took nature thousands of years to form this beautiful corner of China, and yet much of it was damaged or destroyed in just a few minutes. The park will be closed until May 2018, and the local people who rely on tourism will be anxiously awaiting that date. It may take much longer for many of Jiuzhaigou’s natural wonders to be restored, but the park and all those who depend on it will need visitors to return. Let’s hope this stunning area and the friendly people who inhabit it can bounce back from this disaster. If you decide to visit next summer, you’ll be a big help.