Harbin Ice and Snow Festival Posted by sasha on Feb 17, 2013 in Culture 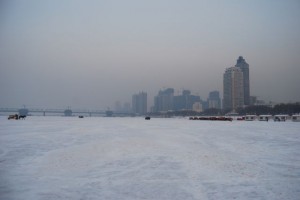 See why they call it the Ice City?

In the nearly four years that I’ve been living in China, there’s only one place that I’ve visited on three separate occasions – Harbin (哈尔滨 – hā ěr bīn), the capital city of northeast China’s Heilongjiang province (黑龙江省 – hēi lóng jiāng shěng). Originally financed by the Russian Empire at the end of the 19th century, it later became the largest Russian enclave after the Soviet Union when the city was flooded with Russian white émigrés who were fleeing war and revolution. While you won’t find many Harbin Russians living in the city today, the Russian influence is still everywhere you look – in the architecture, in the shops, and in the restaurants. On our most recent visit there, the lasting Russian legacy was very apparent as we took a stroll along the riverside Stalin (yes, that Stalin) Park (斯大林公园 – sī dà lín gōng yuán). Stopping for a quick workout in one of the many free public exercise parks, we chatted with an elderly Chinese man who spoke Russian just as well as he spoke Mandarin. By the way, if you’re seeking out the best environment to study standard Mandarin, many people suggest Harbin. That is, of course, if you can look past the bitterly cold winters that have also earned Harbin the nickname of “Ice City” (冰城 – bīng chéng). 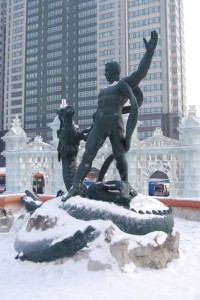 With an average temperature of −16.8 °C (1.8 °F) during winter, it should come as no surprise that Harbin is well-known for its ice and snow related activities. Most notably, the city hosts an annual Ice and Snow Festival (冰雪节 – bīng xuě jié). This is one of the Top 5 largest festivals of its kind on Earth, and it attracts thousands of tourists who brave the cold to take in the sights. If you hope plan or hope to visit Harbin during the festival at some point, here are some tips: 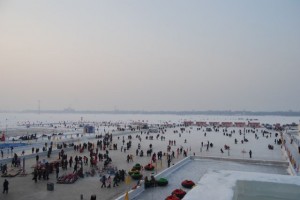 Winter on the Songhua River.

Although the Ice and Snow Festival doesn’t officially kick off until around January 5th, you can still visit the parks and see plenty of sculptures beginning around Christmas Eve. By late January, most of the works are completed, so if you want to watch the artists at work it’s best to head there a week or two earlier. Not surprisingly, it becomes a madhouse during the Spring Festival; unless that’s your only option, it’s best to come at another time. At the end of February, the sculptures begin to melt and the festival comes to a close.

Places to Visit for the Festival

While you’ll find small ice lanterns scattered around town, especially along the pedestrian only Central Avenue (中央大街 –  zhōng yāng dà jiē), you need to head into one of the three main parks to really get the full experience. Here are your options: 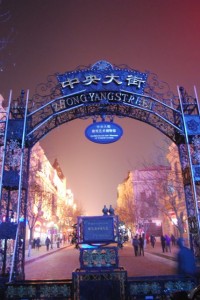 North end of the Central Avenue.

TRANSPORT: If you’re staying along the Central Avenue, you can just walk! Just go along the West Fifth Street (西五道街 – xī wǔ dào jiē), and you’ll run right into it. 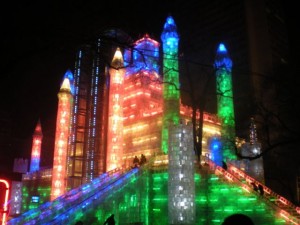 TRANSPORT: From the south end of Central Avenue, hop on bus #29 and go directly there for 2 RMB. Alternatively, you could take a taxi, join a tour group, or just walk across the frozen river yourself! 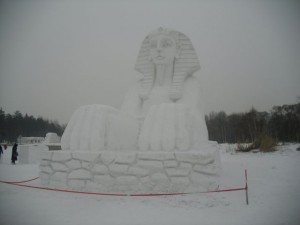 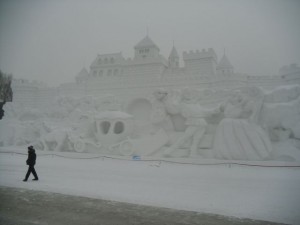 Always free for children below 1.2 meters and seniors over 90

TRANSPORT: Bus #29 will also take you out here. Just make sure you’re on the last bus back, otherwise you’ll be haggling with cab drivers who know you are freezing and have no other choice. Alternatively, most hotels can set you up with a shuttle that will take you there and back free of charge and buy the ticket for you. 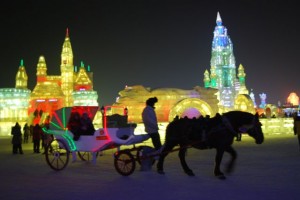 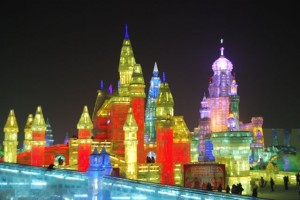 There’s plenty more to see and do in Harbin outside of the Ice and Snow Festival. Just head down to the Songhua River (松花江 – sōng huā jiāng) where you’ll find a winter activities theme park. Go ice skating (溜冰 – liū bīng), or just rent an inner tube for 20 minutes and sled down an icy hill. For a more Chinese experience, you can rent an on-ice bicycle (冰上自行车 – bīng shàng zì xíng chē), simply push yourself around on a chair using poles, or whip a dreidel on ice. 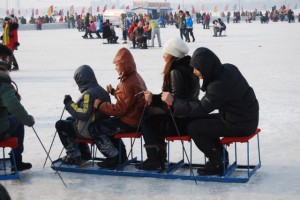 Fun for the whole family!

Simply walking along Central Avenue is a great way to take in the Russian architecture, and there are plenty of places to stop for a bite or a drink along the way. If Russian knick-knacks are your thing, you’ll be able to find plenty of them in the shops as well. A brief detour down a side road will also lead you to the stunning St. Sophia cathedral (圣索非亚教堂 – shèng suǒ fēi yà jiào táng). 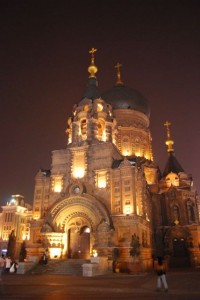 Before heading out, you might as well take a trip out to the Tiger Park (老虎公园 – lǎo hǔ gōng yuán). Here, you’ll see a big group of massive Siberian tigers, as well as a variety of other animals. You used to be able to feed the hungry hungry kitties, but it seems as if they’ve taken that option away. 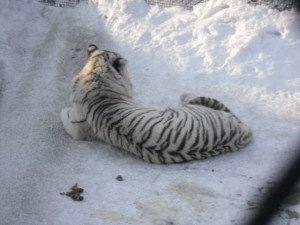 If you’ve got a little more time, you may want to look into taking the 3-hour train ride out to China’s biggest and supposedly best ski resort, Yabuli (亚布力 – yà bù lì). Whatever you decide to do, you’re bound to have a good time in Harbin. Don’t let the subzero temperatures deter you from visiting; just put on a few more layers, take a sip of that cheap Russian vodka you found in a cornerstore, chase it with a Harbin beer, munch on a tasty Harbin sausage, and get out there to enjoy this winter wonderland. 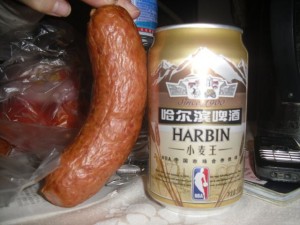 Beer and sausage - Harbin's most famous food and drink combo.