Hiking Mt. Tai Posted by sasha on Jul 5, 2016 in Uncategorized

China is home to countless world-famous sites – the Great Wall, Terracotta Army, and the skyline of Shanghai all come to mind. While all of these are manmade attractions, the country also boasts an incredible array of natural wonders – raging rivers, seemingly endless grasslands, and plenty of towering mountains. Of all the peaks in China, none are more renowned than the Five Great Mountains (五岳 – wǔ yuè). Of these, Mt. Tai (泰山 – tài shān) is considered to be the most sacred. For many Chinese people, making the pilgrimage here to ascend all 7,000+ stairs to the top is something high atop their bucket list. Let’s take a closer look at this important mountain and the epic climb to reach its summit.

An Introduction to Mt. Tai 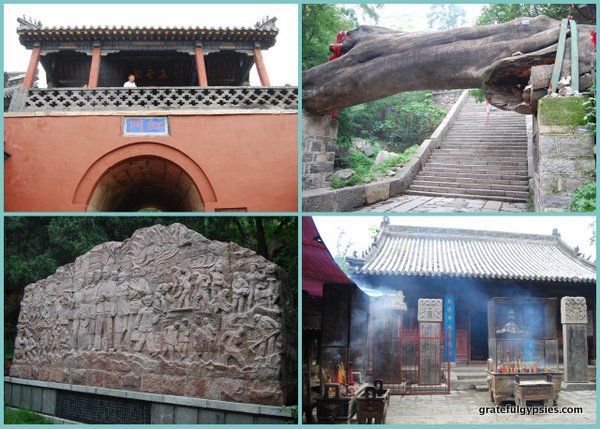 At the bottom of Tai Shan, heading up.

Located in Shandong province (山东省 – shān dōng shěng), Mt. Tai is referred to as the Eastern Mountain (东岳 – dōng yuè). As it is located in the East, it’s associated with the rising sun and thus, birth and renewal. According to Chinese mythology, these mountains originated from the limbs and head of Pangu (盘古 – pán gǔ), the first living being and creator of all. The peak – the Jade Emperor Summit (玉皇顶 – yù huáng dǐng) – is at 1,545 meters above sea level. There are many mountains in China, but only Mt. Tai is known as “the first mountain” (第一山 – dì yì shān). The mountain also played an important role in the development of Buddhism (佛教 – fó jiào) and Taoism (道教 – dào jiào) in China. 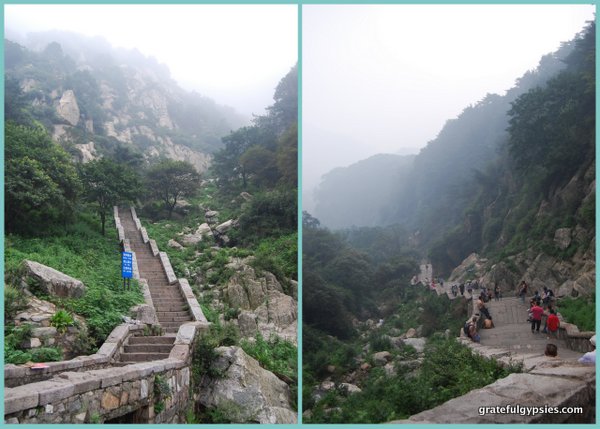 According to Chinese legend, you’ll live to be 100 years old if you climb Mt. Tai and its 7,000+ stairs. Many attempt this feat, but quite a few end up giving up half way and hopping on the cable car. Others take the bus for half of the way and then hike the rest. Something tells me the whole “live to be 100” thing doesn’t apply for those who cheat and take the easy way out. 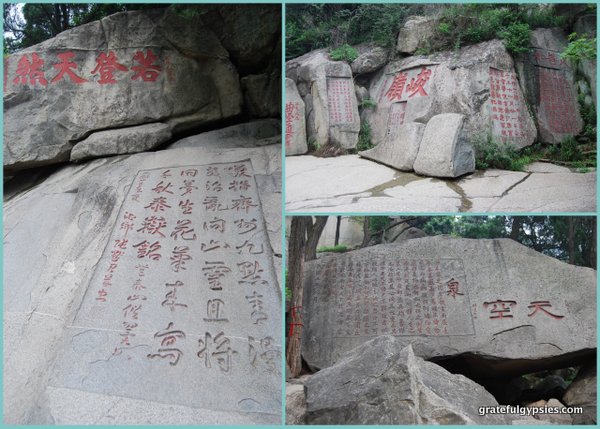 Some of the many carvings along the mountain.

Countless emperors, scholars, and poets have visited this mountain, and they’ve left many famous inscriptions in the rocks along the way. In total, 72 emperors are believed to have visited Mt. Tai, and on the mountain there are twelve historically recorded imperial ceremonies paying homage to Heaven and Earth. 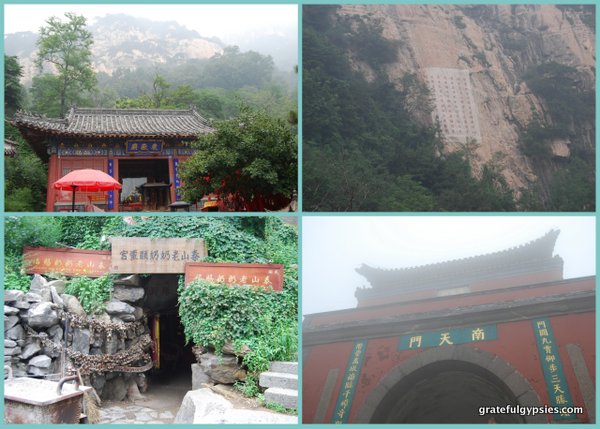 It’s hard to believe, but on this one mountain alone there are 22 temples and over 1,800 stone tables and inscriptions. The largest temple is located at the foot of the mountain – the Temple of the God of Mount Tai, also known as the Dai Temple (岱庙 – dài miào). At the top of the mountain, you’ll find the Azure Clouds Temple (碧霞祠 – bì xiá cí), another grand temple complex. Unfortunately, as mentioned above there are a few thousand stairs for you to climb in between the two. At least there’s lots of things to see along the way! 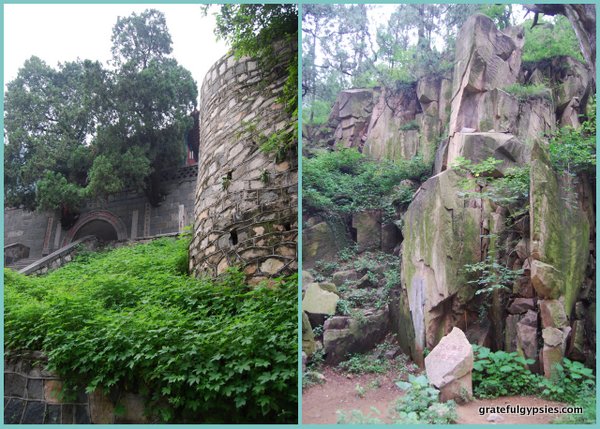 Taking in the scenery.

The best way to visit the mountain is from the city of Tai’an (泰安 – tài’ān). Trains come here from all over China, and there are even quite a few high-speed lines that come through town. From the station, it’s a short bus ride to the foot of the mountain. As is the case with every scenic area in China, you need to buy a ticket to get in. 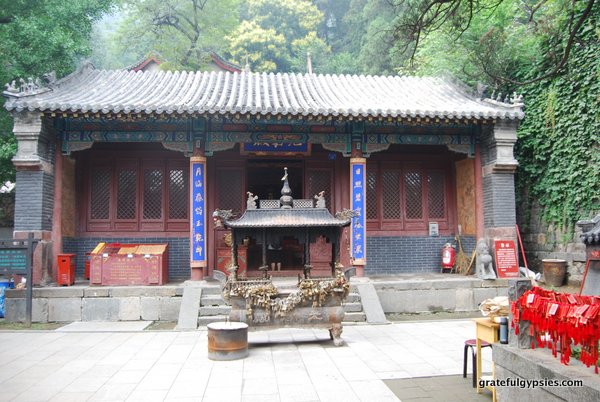 It’s a long way to the top, and it’s all stairs; at times it feels like you’re just on a never-ending staircase. Thankfully, all the temples and inscriptions along the way allow you to pause and rest here and there. The temples start to look the same after a while, though, and unless you’re fluent in Chinese, you’re not really going to be able to understand or appreciate the inscriptions. 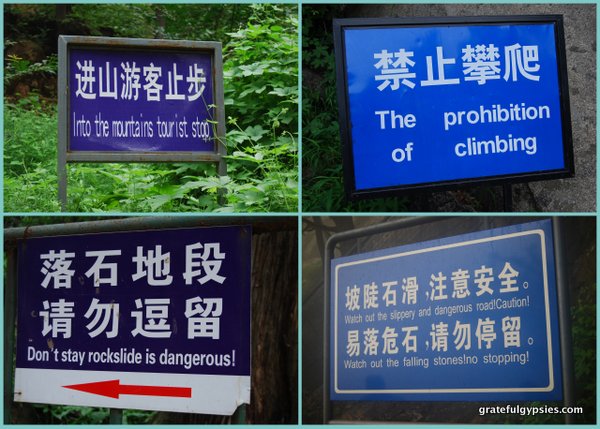 While you may not gain deep wisdom from the ancient inscriptions, you don’t have to be able to read Chinese to enjoy the countless Chinglish signs you’ll encounter on your way up the mountain. 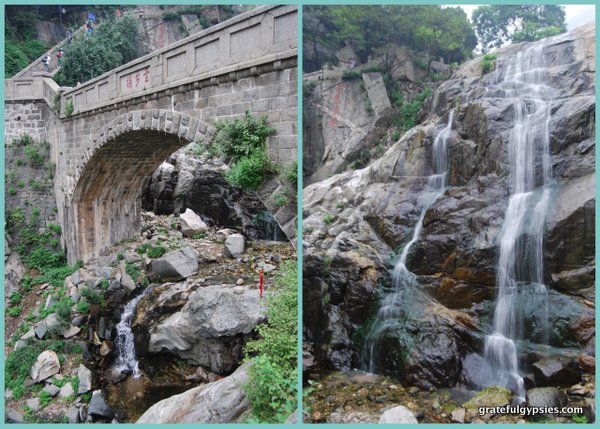 On the long and winding path up the mountain, there are plenty of places you can stop and have a rest. Anyone who has traveled in China knows that people there can’t make it very far without a snack or smoke break, and there are ample opportunities for both when scaling the thousands of stairs of Mt. Tai. 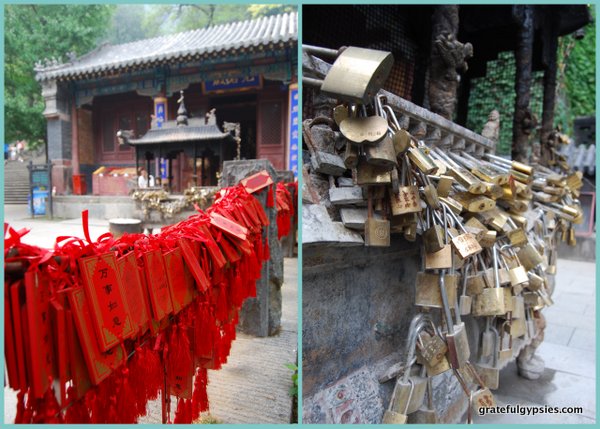 Locks and cards at a temple.

A very popular thing to do when climbing Mt. Tai is buy a red card or a lock and place them at one of the temples. The red cards usually have a prayer or a wish on them, while the locks are clipped on by couples who hope that it will symbolize their eternal love. 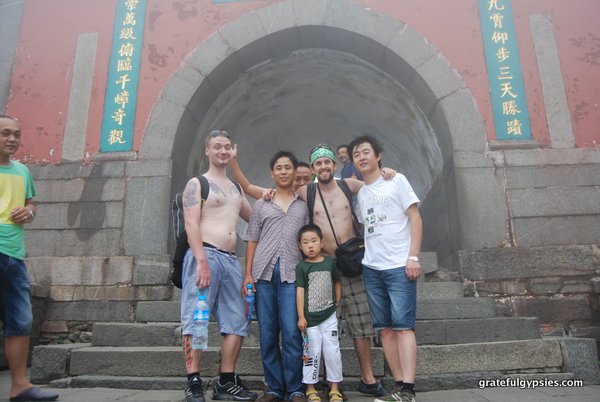 After hours of trudging up the stairs, you finally reach the top. By the time we finally got there, our legs were burning, our shirts were drenched in sweat, and the clouds had rolled through bringing with them a chilly breeze. Of course, a group of strangers wanted to take a group photo with us at the gate. 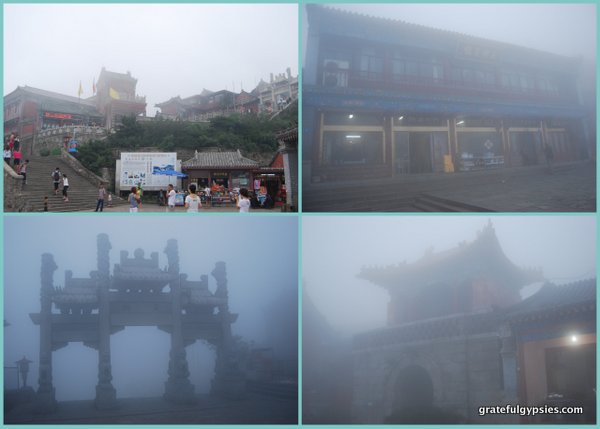 Unless you want to turn around and hike all the way back down, you’ll probably want to sleep up here. There’s a little village of sorts at the top of the mountain with a few simple guesthouses and restaurants. After a shower, a warm meal, and a beer, we hit the bed hard and slept for a few hours before waking up to see the sunrise. 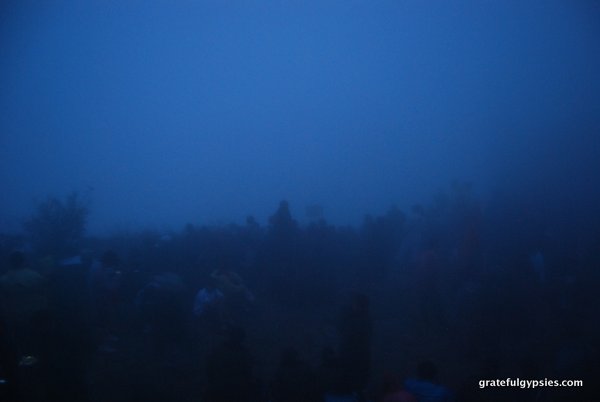 Rolling out of bed at an ungodly hour, you can imagine our disappointment when there was nothing but clouds in the early morning sky. Exhausted college kids were all around – they had hiked up in the middle of the night in hopes of sunrise and were now sleeping sitting up, wrapped in the Mao-era coats that are available for rent. Thankfully for us, we could retreat to our room and sleep for a while longer. Our luck would not keep up, though, as lightning caused them to close down the cable car that afternoon. Rather than wait it out, we endured the painful walk halfway down the mountain to the bus station. Needless to say, our legs were sore for at least a week after that one. Oh well, at least we’ll live to be 100!