The Qingdao Beer Festival (青岛啤酒节) Posted by sasha on Jul 30, 2011 in Uncategorized

About a month into my first stint in China (中国 – zhōng guó), I suffered from a case of itchy feet.  While I had moved here to work, my job was only meant to be a means to an end – to fund my adventures.  My first few weeks in 北京 had been a roller coaster, to say the very least, as I made the decision to leave the company I was with to find my own job and apartment.  In order to celebrate, and to relieve some of the stress that had been acquired in the move, it was time to travel (旅行 – lǚ xíng).  Seeing as how I had just paid rent (租金 – zū jīn) for three months (三个月 – sān gè yuè), plus a deposit (押金 – yā jīn), my wallet was not exactly thick.  With National Day (国庆节 – guó qìng jié) and the ensuing time off fast approaching, I knew I had to act quickly.  Always the thrifty traveler, I searched the internets far and wide until I finally found a cheap plane ticket (便宜的飞机票 – pián yi de fēi jī piào) bound for the coastal city of Qingdao (青岛 – qīng dǎo), the home of China’s most famous (有名 – yǒu míng) beer (啤酒 – pí jiǔ).  It should be noted here that the actual product still bears the outdated Wade-Giles spelling for the city, Tsingtao.  Don’t let this confuse you, as they are one in the same…

As an avid beer drinker, I was excited at the prospect of visiting 青岛.  Once I found out that there would actually be a special event – the Qingdao Beer Festival (青岛啤酒节 – qīng dǎo pí jiǔ jié) – going on at the same time, I was downright thrilled.  Joining me on the trip would be my good friend (好朋友 – hǎo péng yǒu), Tim.  Seeing as how a majority of the three weeks we had known each other had been spent drinking beer, this trip seemed like a logical decision.  Before we could embark on our journey, we did have some work to do, as we had to move (搬家 – bān jiā – lit. move house).  We packed up our worldly possessions, moved them across town to the new digs, and set out with a HOP, skimp and a jump, excited about what was ON TAP for us that weekend. 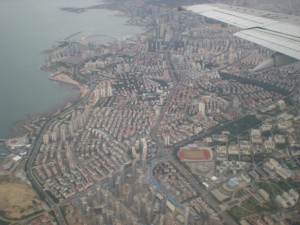 Before we get into my fuzzy memories of what happened on that particular trip, let’s learn a little bit of history (历史 – lì shǐ) about Qingdao.  Way back in the day, during the Qing Dynasty, the government equipped the city to defend against naval attacks.  This caught the attention of Germany (德国 – dé guó), who decided they wanted Qingdao for themselves.  From 1898-1914, the German navy used the city as a base.  Surely feeling a bit homesick, they decided to bring a little bit of Germany to China, and thus the Tsingtao Brewery was born.

Now that the history lesson is out of the way, let’s jump back to 2008, shall we?

Seeing as how this was the first time (第一次 – dì yī cì) for both of us traveling in China, it was bound to be an interesting experience no matter what happened.  At the time, our combined level of Chinese was probably as good as a one-year old native speaker.  Wait, no, never mind… I don’t want to sell one-year old Chinese kids short.  We had been relying on friends to get us around and feed us in Beijing, and now we were being thrown out into the wild to fend for ourselves. 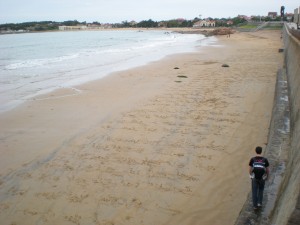 Calligraphy in the sand. 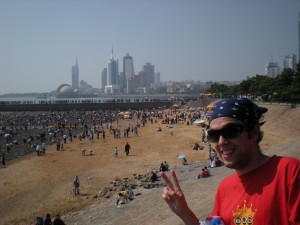 Beach and skyline of Qingdao.

Our first step was to check-in (入住 – rù zhù) to our hostel.  Upon checking in, we were promptly offered a free bottle of Tsingtao.  I already liked Qingdao.  Next up, we decided to take a stroll along the beach (海滩 – hǎi tān) to take in the view of the Yellow Sea (黄海 – huáng hǎi).  Shortly into our casual stroll, I couldn’t help but notice the throngs of Chinese tourists playing with the sand and rocks near the shore.  Later on, I would learn that Qingdao is a huge tourist destination for people in China; many of whom are from the countryside and are visiting a beach for their very first time.  I suppose their fascination with rocks and sand is justified.

Walking around made us both thirsty (渴 – kě), so we decided to make our way to the beer festival.  I’m pretty sure we managed to get ourselves there by entering a cab armed with multiple bottles of Tsingtao and simply pointing to them.  It’s a fair bet that our driver had already escorted a few 老外 to the festival that weekend, and as such, was used to this game of charades. 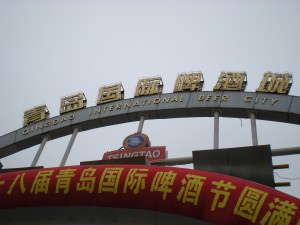 The gate to obliteration. 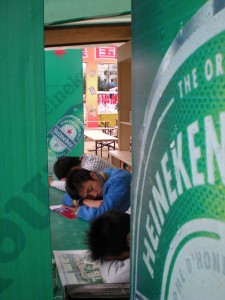 Working hard at the Beer Festival.

Entering the festival grounds at around 3 p.m., we were expecting a raucous party full of red-faced Chinese men eager to give us beer.  We were wrong.  It was clear that we were too early (太早了 – tài zǎo le), as the scene resembled more of a kiddie carnival than the movie “Beer Fest.”  We even saw a table full of vendors all fast asleep.  Although this was a slight disappointment, we weren’t going to let it ruin our good time.  Determined to have our share of debauchery and shenanigans, we went off in search of 啤酒.  Having spent the previous three weeks drinking uncanny amounts of Tsingtao in Beijing, we were hoping to find something different to cleanse our palette. While we were able to find some Belgian beer (比利时啤酒 – bǐ lì shí pí jiǔ), it was too expensive (太贵了 – tài guì le), especially considering our financial situation, which was not exactly ideal.  While attempting to haggle (讨价还价 – tǎo jià huán jià) with the vendor, we noticed that his mini-kegs of beer were warm.  Obviously, this turned us off, and we informed him of our decision to shop elsewhere.  Before we could leave, the man informed us that it was only the outside of the keg that was warm, and that the beer inside was actually ice cold.  This was just insulting.  Sure, we were dumb 老外 utterly lost and confused in China, but for him to insult our beer intelligence really hit below the belt. 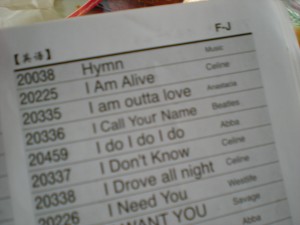 My personal favorite, "Hymn", as performed by Music.

About ready to give up all hope, we finally stumbled upon a small tent offering up 5 RMB (五块 – wǔ kuài) bottles of Tsingtao, a wide variety of kebabs (串- chuàn), and, the icing on the cake, karaoke (卡拉OK – kǎ lā OK).  Our spirits lifted, we grabbed a seat, loaded up on 啤酒 and 串 and grabbed the song list.  This public karaoke had me excited, as opposed to the private rooms of Beijing KTVs.  Coming from the US, I had been used to (and actually enjoyed) the whole “humiliating yourself in front of strangers” aspect of karaoke, so this was more up my aley.  When we started to sing songs (唱歌 – chàng gē), the tent was practically empty.  After word spread that two 老外 were making fools of themselves on stage, more and more people started to trickle in.  With the addition of our German friends (德国朋友 – dé guó péng yǒu), the tent was suddenly full.  I considered asking the proprietors of the tent for free beer, seeing as how we had brought a massive crowd to them, but my Chinese wasn’t good enough. 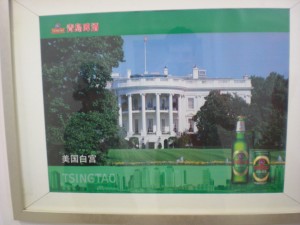 Apparently Tsingtao is the beer of choice at the White House.

Pumping up the crowd in the karaoke tent.

One thing we quickly realized was that middle-aged Chinese men really, really, really wanted to drink with us.  And they didn’t just want to casually drink with us; they wanted to do irresponsible, American college freshmen binge drinking with us.  We were constantly challenged to race, and were always being encouraged with calls of cheers (干杯 – gān bēi – lit. dry glass).  One man in particular was very adamant about showing off his drinking prowess to us.  It was only a matter of time until he was drunk (喝醉了- hē zuì le), at which point he decided it would be a good idea to get on stage. See for yourself…

This guy was on point.

Thanks to the never ending calls of “干杯!” in that tent, time flew by.  After the sunset (日落 – rì luò), things really started to pick up.  We moved the party from the cheap beer and chaun’r tent to one of the big tents, as we had been informed that the REAL entertainment for the night would soon be starting.  Apparently, people hadn’t spent 30 RMB just to see us make drunken fools of ourselves.

Under the big tent, the party was in full swing.  Beer vendors were working overtime to fill huge mugs, and beer drinkers were working overtime to empty them.  Especially us.  I could count the 老外 in that tent with my fingers alone (although there might have been some double vision going on, so maybe I needed my toes as well), and as such, our company was highly sought after.  Being unable to afford the 90 RMB mugs of German beer myself, you can imagine my excitement at the numerous offers I got from strangers to drink theirs.  Of course, I was expected to 干杯 every time, and I obliged. 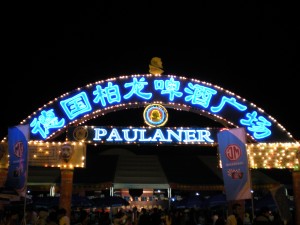 BEER! The cause of, and solution to, all of man's problems. - Homer Simpson

The entertainment for the night was some pop music (流行音乐 – liú xíng yīn yuè) group that was apparently popular, as most people were singing along.  I thought we had drawn quite the crowd with our karaoke performance, but these guys definitely topped us…

The main event under the big tent at the beer festival.

Not knowing any of the words ourselves, we opted to instead jump on stage, much to the dismay of the security guards.  No one else seemed to mind, though, and the group actually seemed quite happy to have acquired some back up dancers.  I’m just impressed none of us fell off the stage… 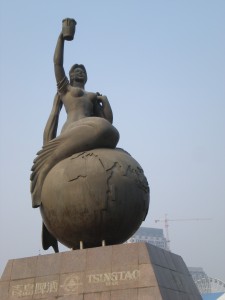 All in all, the 青岛啤酒节 was quite the experience.  And, for the record, we did more than just drink there.  I’m serious!  We visited the St. Michael’s Cathedral, checked out some old German buildings, hit the Underwater World aquarium, and ate swordfish.  I even took a dip in the incredibly cold October water.  I’d say the trip was a success.  I made it there and back, managed to feed myself, get around the city, and drink excessive amounts of beer.  My first trip in China was a great time, and it made me want to explore this great (and huge) country some more.

I trust that by this point in the post, you have a beer in your hand, so 干杯! In case you should find yourself in China next month, this year’s installment of the Qingdao Beer Festival will be running from August 13-28, and more information can be found HERE. I’ll be making my second trip to the Chinese coastal city, so expect some more video highlights next month.