For the past few months, we’ve been taking a closer look at rock music in China. You can go back and check out Part One about Cui Jian and the sound known as Northwest Wind, as well as Part Two where we looked at Black Panther, Dreaming, and Tang Dynasty. Today we’ll continue into the 90s to see how Chinese rock continued to develop. I just have on question for you – are you ready to rock? (你准备好摇滚了吗? nǐ zhǔn bèi hǎo yáo gǔn le ma?). 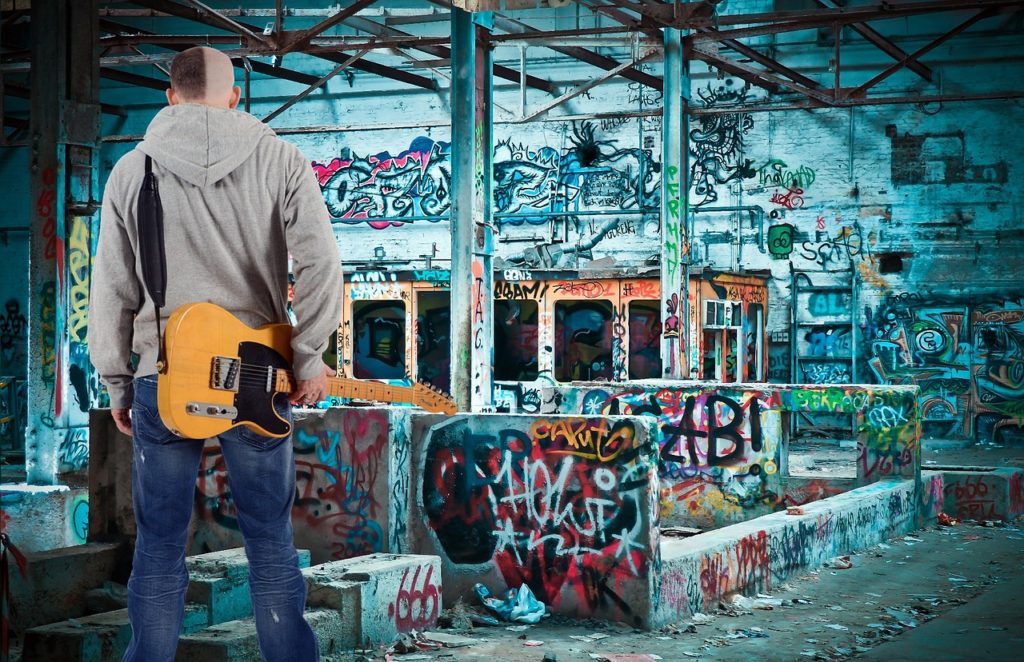 Image by Oberholster Venita from Pixabay

As I mentioned in the last post, Tang Dynasty’s debut album was a smash hit. It sold over 2 million copies and helped propel rock music to the mainstream in China and throughout Asia. Rock & roll even made it onto the airwaves of CCTV! People loved the heavy metal (重金属 zhòng jīn shǔ) guitar riffs and nostalgic lyrics that harkened back to an era thought to be the pinnacle of Chinese civilization.

Unfortunately, the popularity and accessibility of rock music at large started to decline in China in the mid-90s. Much of this had to do with censorship from the government, with restrictions on performances and the banning of rock from TV. The nostalgia soon faded into the rearview mirror, as Chinese rockers of the mid-90s turned punk (朋克 péng kè) and went underground.

He Yong (何勇 Hé yǒng) is considered a pioneer of the punk scene in China. His one and only album titled Garbage Dump (垃圾场 lā jī chǎng) came out in 1994. Most of the songs were written during the height of the Tiananmen Square protests. As you can imagine, some of the lyrics on this album turned out to be pretty controversial as a result. Here’s the music video for the title track on that album followed by the lyrics. I actually managed to get a good English translation for this one!

While his music was definitely controversial, He Yong was still quite popular. Along with Dou Wei (Black Panther) and Zhang Chu, He Yong was part of the trio known as the 3 Moyan Heroes (魔岩三杰 mó yán sān jié) after their record label Moyan Culture (魔岩文化 mó yán wén huà). The name Moyan means “Magic Rock” and it was a bit of a play off the name Rolling Stone. He played a huge gig in Hong Kong with Tang Dynasty at the end of that year. Before the show, he gave an interview where he trashed the entire genre of Cantopop (粤语流行音乐 yuè yǔ liú xíng yīn yuè) that was becoming wildly popular at the time.

A tragic loss for He Yong and the entire rock community in China happened a few months after that concert. Zhang Ju (张炬), bass player for Tang Dynasty, was involved in a fatal motorcycle accident. He was just six days away from celebrating his 25th birthday. There was a funeral for him at the Western Qing tombs that was attended by most of the big names in Chinese rock.

This loss of Zhang Ju hit He Yong especially hard. The musician fell into a deep bout of depression and alcoholism from which he never really recovered. He attempted to take his own life by setting himself on fire and was placed in a mental institution as a result. He has not released any music since and has remained out of the public eye for the most part.

As they say in the business – “the show must go on.” The punk rock craze of the mid-90s continued with some new blood in the scene. This included Underground Baby (地下婴儿dì xià yīng’é), or UnderBaby for short. They got their start playing at a memorial show for Kurt Cobain and stunned the audience by belting out a bunch of raw original punk songs instead of standard rock covers. Check out a video of them playing one of their biggest songs “All the Same” (都一样 dōu yī yàng):

The band was formed by two brothers, Gao Xing (高幸) and Gao Yang (高阳). After that gig, a community of musicians started hanging out at the brothers’ home in a Beijing hutong. This is where another punk band named Brain Failure (脑浊 nǎo zhuó) got their start. Along with a few other bands they put out an album called Boredom Contingent (无聊军队 wú liáo jūn duì), representing the boredom and frustration felt by much of the youth in urban China during the 90s. If you’re interested, you can listen to the entire album here:

Of the bands on that album, Brain Failure has achieved the most success. They were the first Chinese punk band to release an album and tour internationally. To reach a wider audience, the band sings in both Chinese and English. They’ve even recorded with members of the famous American band Dropkick Murphy’s. If you’re curious to hear what a Chinese punk band singing in English sounds like, here’s their track “Coming to the USA”:

We’re not quite finished rocking out in China just yet, so stay tuned for the fourth and final post as we take a look at what the 2000s brought to the rock scene and where it’s headed next.