Shaolin Monastery Posted by sasha on Sep 22, 2016 in Uncategorized

In addition to the amazing Longmen Grottoes and the historic White Horse Temple, Henan province is also home to the Shaolin Monastery (少林寺 – shào lín sì). This ancient temple is a UNESCO site and is the cradle of Chinese Zen Buddhism. You may know it as the home of Shaolin kung fu (功夫 – gōng fū), as it was made famous by a 1982 film starring Jet Li in his debut role. Let’s learn more about this temple, starting with a bit of history. 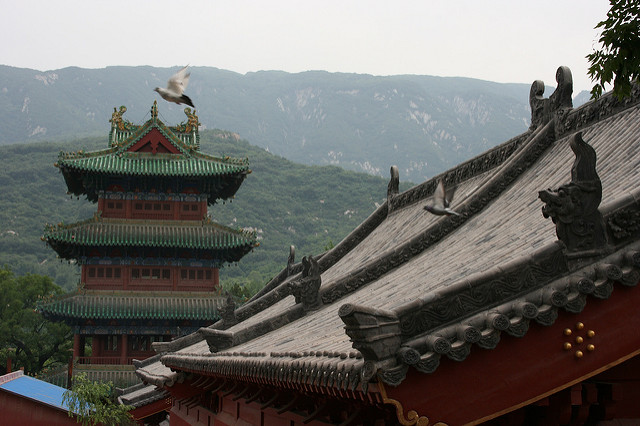 According to legend, a dhyana master named Buddhabhadra – Batuo (跋陀 – bá tuó) in Chinese – was the first abbot of the Shaolin Monastery. It is said that he traveled to China from India during the Northern Wei Dynasty. He was given some land on the holy Mt. Song, where he built the temple around 495 AD. It was built on the Shaoshi peak in the forest, hence the temple’s name meaning “Temple of Shao Forest.”

Some thirty years later, another monk traveled to the temple from India to teach Zen Buddhism. He was refused admittance into the Shaolin Temple and then climbed high into the mountains to meditate in a cave. It is said that he remained in the cave for nine years, where he sat facing the cave wall meditating. His shadow became permanently outlined on the cave wall, which is now a sacred place. He was finally admitted into the temple, where he became the patriarch of Zen Buddhism in China. While there, he developed exercises to help keep the monks fit, which led to the development of Shaolin martial arts.

The martial arts training would come in handy later on, as the temple and Buddhism in general would come under attack. When the temple became a safe haven for Ming loyalists, it was burned to the ground by Qing rulers. Shaolin kung fu was outlawed, and the monks and their followers dispersed throughout the country. It was eventually allowed to reopen, but the temple was once again badly damaged during the disastrous Cultural Revolution.

Once again, the temple was reopened and renovated. The original Shaolin kung fu was replaced by a new, standardized form of martial arts known as wushu (武术 – wǔ shù). Thanks in large part to the popularity of the 1982 film “Shaolin Temple,” many training schools opened around the temple. These were eventually outlawed by the government and forced to move to the nearby towns, leaving only one school in operation at the temple site. The Shaolin Temple Kung Fu Academy is the largest school of its kind in China. See a bit of what it’s like for the students there in this awesome video from National Geographic entitled “36,000 Kids You Don’t Want to Mess With:”

The Shaolin Monastery is a massive complex, covering 57,600 square meters. It’s located on the mountainside and follows a south-north axis. Walking through the complex, you’ll visit a multitude of halls and buildings. Some of the highlights include the Hall of a Thousand Buddhas (千佛殿 – qiān fú diàn) and the Hall of Heavenly Kings (天王殿 – tiān wáng diàn). 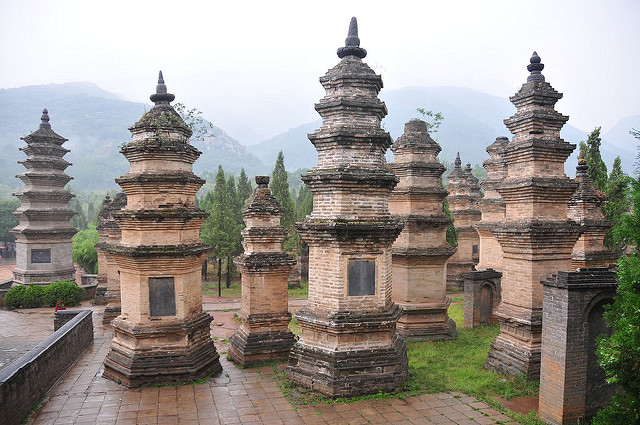 Continuing along a wooded path, you’ll arrive at the Pagoda Forest (塔林院 – tǎ lín yuàn). Here you’ll find over 250 stone and brick pagodas containing tombs from various dynasties. The size and shape of the pagoda depends on factors such as one’s Buddhist status and prestige during their lifetime.

If you’re headed to the Shaolin Monastery in search of peace and tranquility, you might not find it. The temple is incredibly popular with tourists, both domestic and international, which means crowds, tons of pushy vendors, and even a kung fu performance. Don’t let the touristy nature of this performance deter you, though – it really is impressive and well worth seeing if you’ve already put forth the effort to get to the temple. Check out some highlights and see for yourself:

The temple is located in Dengfeng (登封), about an hour away from the provincial capital of Zhengzhou. From there, you can catch a bus every half an hour out to Dengfeng. You can also visit from Luoyang directly to the temple. The temple is open year-round, and admission costs 110 RMB/person. The kung fu shows can be seen at 09:30, 10:30, 11:30, 14:00, 15:00, and 16:00. As it’s a very popular place to visit, it’s best to avoid coming here during major national holidays.