Sichuan and Hunan Cuisine Posted by sasha on Apr 3, 2019 in Culture

After learning all about Cantonese cuisine last month, we’re shifting towards western China to explore the rich flavors of this region. When it comes to the food from western China, the two most notable examples are certainly Sichuan cuisine (四川菜 – sì chuān cài) and Hunan cuisine (湖南菜 – hú nán cài). Let’s head west and delve deeper into these two renowned styles of Chinese food as well look at both Sichuan and Hunan cuisine.

An Intro to the Cuisine of Western China

Both Sichuan and Hunan cuisine are included in the Eight Great Culinary Traditions of China, while only Sichuan represents the west in the Four Major Cuisines (四大菜系 – sì dà cài xì).

Both known for their incredibly spicy dishes, these two famous styles of Chinese cuisine have been influenced heavily by foreigners – for example, Buddhist missionaries introducing the heavy spicing techniques prevalent in Indian cuisine, and Spanish traders bringing chiles in the 16th century. 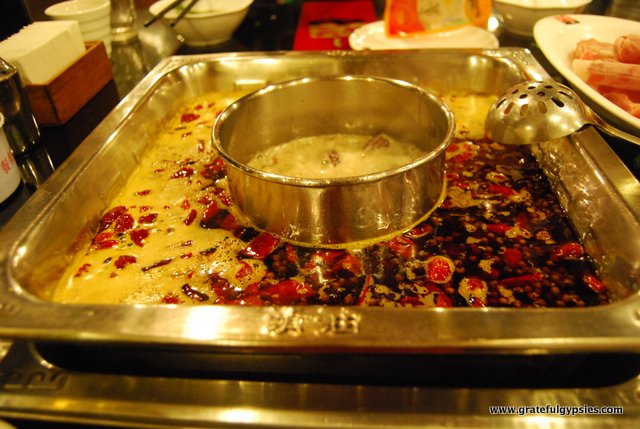 Now, let’s take a closer look at each of these famous culinary traditions of China and learn about some common dishes:

More commonly spelled as Szechuan in the West, this particular style of Chinese food may be second only to Cantonese in terms of worldwide popularity. One of the most unique aspects of Sichuan cuisine is the Sichuan peppercorn (花椒 – huā jiāo – lit. “flower pepper”) – an unassuming little pepper that leaves your mouth feeling incredibly numb.

Sichuan cuisine is also famous for a few sauces: numb and spicy (麻辣 – má là), fish fragrance (鱼香 – yú xiāng), and the strange/exotic taste (怪味 – guài wèi). Both ma la and yu xiang can be found all over China, but the guai wei is mostly only popular in Sichuan province. Although Sichuan cuisine is mostly known for its spicy dishes, not every dish from this region will leave you sweating and red in the face.

Here are some of the most popular Sichuanese dishes:

Served cold as an appetizer, this dish is a combination of shredded chicken, cucumber, and bean thread noodles, topped off with a sesame based sauce. It’s a great way to start a meal, and especially good on a hot summer’s day.

This famous dish – which literally means “pockmarked grandmother tofu” –  has a famous tale that accompanies it about the woman who created it. Although there are different varieties of this dish, the basic recipe calls for tofu, chili/bean based sauce, fermented black beans, and diced meat. 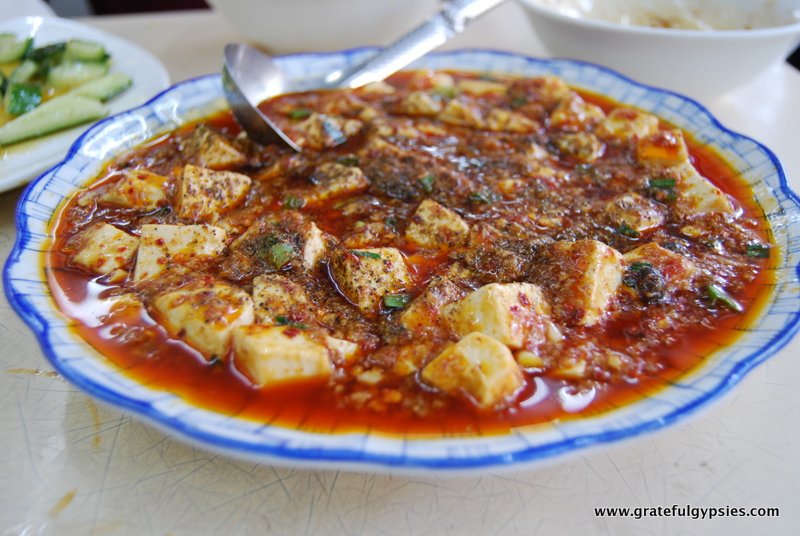 If you’re a vegetarian, just tell your waiter, “I don’t eat meat” (我不吃肉 – wǒ bù chī ròu) and they’ll whip it up for you minus the pork/beef.

For this fantastic Sichuan dish, pork is first boiled, then returned to the pot to be stir-fried with peppers, chili, and soy. Thus the Chinese name, which literally means “returned to the pot meat.” Some Muslim restaurants make this dish with beef, which I personally prefer to the fatty pork used in most other places, but they’re both delicious.

A big bowl of noodles served in a spicy chili-sauce with preserved vegetables, minced pork, and scallions, this dish gets its name from a type of carrying pole that was used by vendors who carried and sold this dish on the street. As such, it can also be called “Peddler’s Noodles” in English.

We can’t talk about Sichuan food without mentioning its legendary hot pot. In what is without a doubt one of the most fun ways to eat on Earth, a pot of spicy chili oil is boiled right at your table, where you’re free to order up your favorite meats, seafood, and vegetables and toss them in to the boiling, spicy goodness. 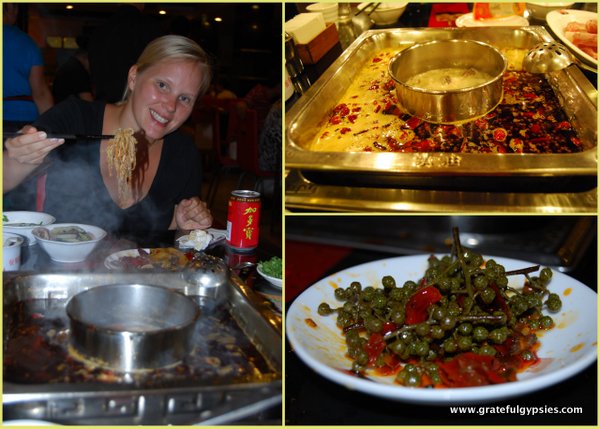 I usually go for the half and half, with one side incredibly spicy and the other being a mixture of chicken broth and mushrooms. If you’re not used to the spice of Sichuan cuisine, this is a good way to ease into it. This way you can at least say you tried fiery hot local style before giving up and switching to the other.

Check out a clip from “Parts Unknown” where Anthony Bourdain learned how to cook Sichuan cuisine:

Also known as Xiang Cuisine (湘菜 – xiāng cài), this style of Chinese food comes from the “land of fish and rice” – Hunan province. Known for being “dry hot” (干辣 – gàn là), Hunan cuisine is often spicier than Sichuan food, simply due to a higher chili content. 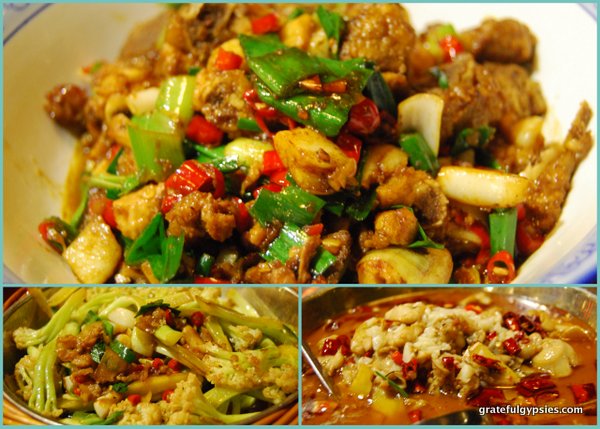 Relying mainly on fresh, local ingredients, Hunan dishes change with the seasons. For example, during the hot summer months a meal may start with a cold dish full of chilies to open up the pores. In contrast, hot pot will be the meal of choice on a cold winter night.

Here are some of Hunan’s renowned dishes:

First, chicken is marinated with soy sauce, sherry, and ginger. It is later cooked with scallions and chili peppers, resulting in a tender and spicy dish. Here’s a good recipe so you can try to whip it up at home.

Yes, this dish is named after that Mao. As a native of Hunan province, this dish was Chairman Mao’s favorite, and he even had Hunanese chefs cooking it up for him when he lived in Beijing. 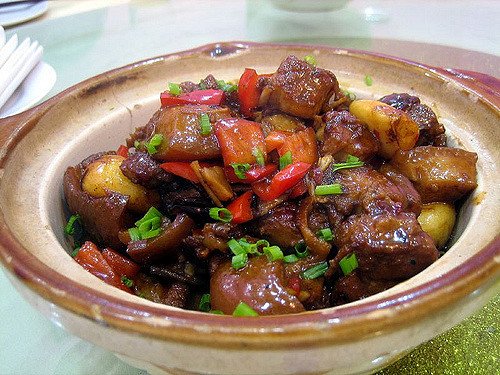 Image by Prince Roy from flickr.com.
Attribution 2.0 Generic (CC BY 2.0)

This dish dates back to Qing Dynasty mathematician Huang Zongxian. Apparently, he got caught in a rainstorm and took shelter in a local kitchen. Inside, he saw a woman salt and sauté a fish, and then throw two handfuls of chopped chilies – one red, one green – in to the mix before steaming the fish.

After traveling and eating my way around China for several years, I can easily say that the spicy food they’re cooking up in the west is some of my favorite. Sure, sometimes it leaves you crying and sweating, but wow is it delicious!

Sampling all of the amazing local food was a major highlight for me when I traveled through Sichuan, whether it was eating hot pot in Chengdu or grabbing a bowl of dandan noodles on the street. I also had tons of fun going out in Changsha, dressed like Santa Claus and feasting on all kinds of crazy spicy food.

你喜欢吃什么东西？
nǐ xǐ huān chī shén me dōng xī
What things do you like to eat?

Put your Chinese to use and leave a comment below to let us know what you think!