Tomorrow is November 11, and it is Singles’ Day (光棍节 – guāng gùn jié) here in China. The name of the festival can roughly be translated as “bare branch” – a tree with no leaves representing a person with no better half. Celebrated on 11.11, the four ones represent those who are flying solo in love. As is the case with every Chinese holiday, there is a wild tale behind Single’s Day. It is said that long ago, on one November 11 evening, four single men were sitting around playing mahjong (麻将 – má jiàng), a very popular Chinese game. On that particular day, the men played from 11 a.m. to 11 p.m. (从上五十一点到晚上十一点 – cóng shàng wǔ shí yī diǎn dào wǎn shàng shí yī diǎn). During their games, no matter who won, the winning card was always the “four columns” card, which shows four independent, parallel columns in two lines, thus resembling the date – 11.11.

Basically the anti-Qi Xi Jie (HERE is a video I made about that holiday), Singles’ Day was started down south in Nanjing (南京 – Nán jīng) by single college students (大学生 – dà xué shēng) in the 1990s. Back then, the main custom for the holiday was to go out to dinner with a group of single friends. Of course, everybody would go Dutch (AA制 – AA zhì) on the bill to show their independence. Another Singles’ Day tradition is to eat four fried dough sticks (油条 – yóu tiáo) to represent the four ones, and one steamed bun (包子 – bāo zi), to represent the dot in 11.11. If you do this, you just might be lucky enough to not be celebrating (or mourning) Singles’ Day next year.

These days, millions of Chinese are in a position to take part in this holiday. This is due in part to the drastic increase in the number of one-person households in China, which has gone up a staggering 29% in the last five years alone. In fact, it is estimated by the Chinese Academy of Social Sciences that by 2020, 23 million Chinese men will have no choice but to remain bachelors. Of course, the one child policy and the tendencies of people to prefer said one child to be a boy rather than a girl haven’t helped matters here. This statistic may also help to explain the immense popularity of internet bars (网吧 – wǎng bā) and online games like World of Warcraft amongst young men here – perhaps they have already consigned themselves to a life of bachelorhood. 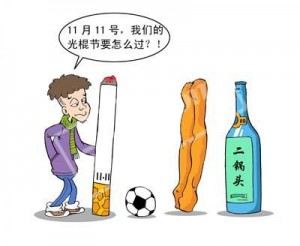 Translation – “Nov. 11 – how do we want to celebrate our Singles Day?” 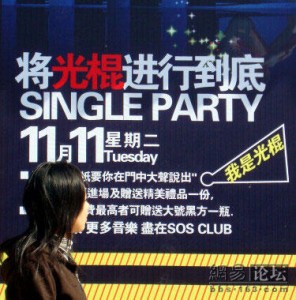 There will be tons of these this week in China.

It should come as no surprise that many people have cashed in on this holiday in recent years. Indeed, this holiday proves to be a fine example of modern day China and its capitalistic tendencies. With so many single people looking for love out there, profitable business ventures abound.

In big cities like Beijing, bars (酒吧 – jiǔ bā), movie theaters (电影院 – diàn yǐng yuàn), and amusement parks (游乐园 – yóu lè yuán) will all run special deals for the holiday, looking to cash in on the single crowd. Online shopping has become huge on this day as well, and the e-commerce giant Alibaba even sold over 19 billion RMB (3 billion USD) worth of goods on 11/11 last year.

A CNN segment about Singles’ Day in China and the e-commerce that follows it these days.

Thanks to the millions of single Chinese, dating TV programs (相亲的界目 – xiāng qīn de jiè mù) and dating websites have become incredibly popular. One such website (www.jiayuan.com), which boasts over 26 million users, holds an annual party for singles. Held on 11.11, 1,111 tickets are sold at the price of 111 RMB each (how do you say overkill in Chinese?)

Then there is Beijing’s first “love supermarket” (爱情超市 – Ài qíng chāo shì), which opened in 2009 on Singles’ Day. Owned and operated by the dating website “I Am Looking for You” (我在找你 – wǒ zài zhǎo nǐ), it is a place where singles can pay 99 RMB to hang their photo along with vital statistics (such as age, salary, and height) on a wall for other singles to view. Located in the bustling Xi Zhi Men district of Beijing, this place gives a whole new meaning to the phrase “go shopping.” 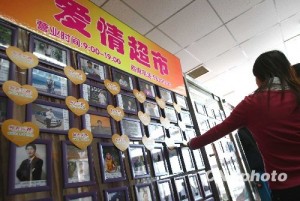 While the holiday is meant for singles, some choose to interpret the four ones in 11.11 differently. Many couples will get married on this day to signify that, in a day full of ones, “you are the only ONE for me.”

Regardless of whether you spend Singles Day at dinner with your fellow loner friends cursing those happy couples out there, or getting married to your one true love, I hope none of you spend your holiday like this girl…