Summer Olympics Posted by sasha on Jul 28, 2012 in Culture, Vocabulary 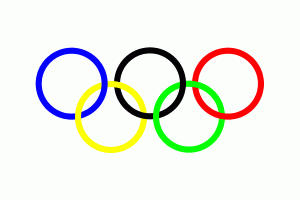 It’s time again for the Summer Olympics (夏季奥运会 – xià jì ào yùn huì), which means it’s been a whole four years since I came to Beijing and China hosted the games for the first time. How time flies! This year, of course, the games are being hosted by London (伦敦 – lún dūn). Many athletes (运动员 – yùn dòng yuán) from all over the world will take part in this incredible event that comes but once every four years. They’ve put their blood, sweat, and tears into years of grueling training just for this chance to prove that they are the best in the world. They have traveled many miles, and so has the Olympic torch (奥运火炬 – Ào yùn huǒ jù), the most famous symbol of the Games.

This great tradition dates all the way back to the summer of 1896, when the first MODERN Olympic games were held in Athens (雅典 – yǎ diǎn). The Opening Ceremony (开幕式 – kāi mù shì) was last night, and it was quite impressive to say the least. Even her Majesty, the Queen of England (英国女王 – yīng guó nǚ wáng), was in attendance. To get you amped up for the next few weeks full of competition, and especially to talk about it in Chinese, here’s some useful vocabulary:

The motto for the Olympics this year is in Latin – “Citius, Altius, Fortius.” In English, that means “Faster, Higher, Stronger” (更快，更高，更强 – gèng kuài, gèng gāo, gèng qiáng), and that’s exactly what we can expect from the 30th installment of the Olympic Games. So happy viewing, everyone! I personally will be glued to my TV during the basketball games, cheering “Go America!” (美国加油 – měi guó jiā yóu – lit. “America add oil!”), one of the first phrases I learned in Chinese way back in the summer of 2008.

Fireworks light up the sky at the end of the opening ceremony in London.