The Taklamakan Desert (塔克拉玛干沙漠) Posted by Stephen on Nov 27, 2011 in Culture 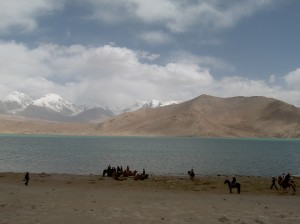 The Taklamakan Desert or 塔克拉玛干沙漠 (Tǎkèlāmǎgān Shāmò), is the world’s 17th largest desert (and one of the largest sandy deserts), running north-south throughout western Xinjiang, Mongolia and even parts of Russia and Afghanistan.

It is bordered by the KunLun mountains to the south and the Tianshan (later post) to the north. Taklamakan is a cold desert, elevated more than a mile above sea level, causing extreme fluctuation in temperatures between day and night. Yet for how inhospitable the climate is, people have roamed these lands for millennium, carving out a unique way of life that continues today.

In the central northern region of the Taklamakan desert rests  Lake Karakul  or  喀拉库勒湖, located nearly 3600 meters above sea level. Amidst this dry high plains environment, Lake Karakul sits as an oasis, providing a constant water supply for local plants, animals, herds and native people. The countryside is quite barren and rugged, populated sparsely by herds of goats and yaak along with some scrub brush. However, the vistas are beautiful as the Karakul valley is surrounded by mountain peaks well over 5,000 and in some cases 6,000 meters high.

Locals are primarily migratory herdsmen that move with the seasons throughout the high plains. Like migratory peoples of North America, they rely on transportable houses, similar to tee pees, called yurts. Yurts or 毡帐 (zhānzhàng) are made to be highly mobile, highly wind resistant, and…well moderately warm. They are more dome-like than teepee-shaped and are much sturdier built to handle the elements. 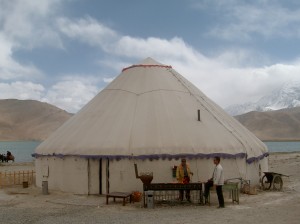 While the Yurt is traditionally a Mongolian design, its influence has extended throughout Northwestern China, Xinjiang and even into Central Asia. Due to its Mongolian roots, many of the customs and religions that Yurt people follow are less Chinese and Muslim and more nomadic and tribal. Like in Tibet, there is a “Cowboy Culture” that comes along with Yurt dwellers, who yearn for the frontier, fresh air and serenity. Like in Kashgar, you get a distinct feeling that these people prefer to exist outside the reach of the Chinese government and Han Culture. Out here on these plains, you fend for yourself.

Be forewarned though–life up here in these high desert plains is no joke and can take quite a toll on ill-prepared travelers. For example, after an exhausting climb upwards into 5000 meter territory, followed by a yak milk-liquor and yak-stew meal, half of our group had taken turn for the worse, experiencing the beginning stages of altitude sickness (imagine the worst headache/body ache of your life coupled with nausea, fatigue and dizziness). While I was lucky enough to avoid the illness, many of my fellow travelers found themselves in a bad state, hundreds of miles from the nearest hospital or clinic and wishing for basic amenities.

As night fell, the desert temperature nose-dived to sub-zero temperatures and the wind turned into icy daggers. Inside the yurts, a small stove would burn throughout the night, but to little effect. Even buried deep under mounds of blankets, rugs and furs (which are sprawled across the floor of the yurt), the cold cut straight through me. As our dejected band of travelers shivered our way through the night, we all were thinking the same thing: how long before sunrise? 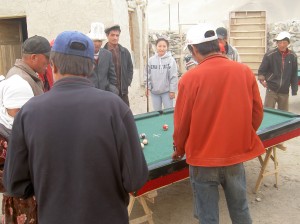 When the first rays came streaming through the cracks in our yurt door, we eagerly set out to explore the surrounding village of about 80 people, sharing bottles of baijiu, yak stew and cigarettes while we played pool on a lopsided table.

Most of the men were either herders, mechanics or “tour guides”, which meant their livelihoods were all inexplicably tied to motor cycles or 摩托车  (mó tuō chē). Cars can barely make it through the dirt paths (our bus got stuck on multiple occasions) and washout roads, so transport usually happens either on horse or camel back, on foot or on a motor bike.

Additionally, all electricity, water and plumbing is self-sustained, as a makeshift wind turbine (see gallery) powered almost all of the villages lighting needs. Water had to be pumped in from wells or purified from the lake. Guard and herd dogs (quite feral to be honest) roamed the alleyways and yards searching for anything edible to eat and all but attacking any 老外 that made direct eye contact or offered a hand to pet. Here, no one wore a watch and almost everyone seemed to be in a perpetual “work break”. Business here (in chinese 事情 [shì qing]) happens on the locals’ terms–when they were good and ready–so I resigned myself to follow their lead and hangout for a spell.

When asked what they do for fun other than pool and cards, one self proclaimed “cowboy” (牛仔 [niúzǎi]) responded by deftly flicking his Playboy Aviator sun glasses from his hat to his eyes while simultaneous lighting up a cigarette and exclaiming, “Clint Eastwood!” while motioning to himself. He then walked over to his raggedy 150 cc bike, kick started it and proceeded to rev of the engine, saying, “horse”. I think I may have just discovered China’s official “Marlboro Man” .

Our last night at the lake ended with–you guessed it–more yak stew and heavy drinking. I soon figured out that, in this climate, a combination of fatty yak meat and hearty stews coupled with strong drink are necessary to brave the frigid nights.

Thus the “喝杯 yurt bomb” (the Xinjiang version of an Irish Car Bomb) became a staple drink of our time spent in in Xinjiang, which requires only a beer and a bottle of baijiu mixed with yak milk. As “Clint” showed us, all you have to do is take a swig of beer and hold it in your mouth saving a little space for step two. Next, while still “gargling” the beer, take a pull of baijiu or yak jiu, mix it all together by shaking your head violently, then swallow and enjoy. After you start feeling that fire in your belly, these great plain nights don’t feel so bad…that is…until you step outside. 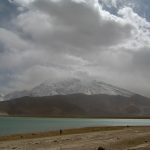 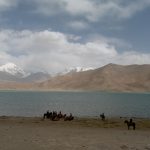 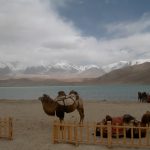 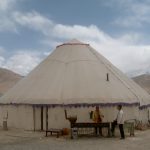 Your Standard Yurt or 毡帐. 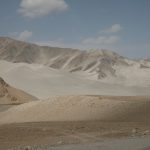 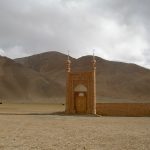 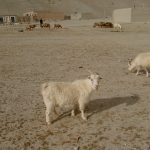 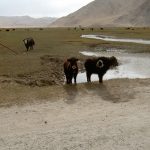 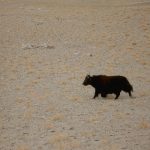 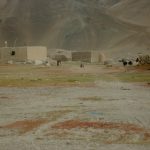 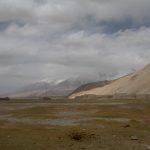 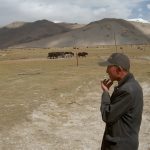 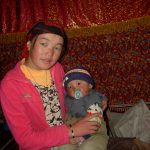 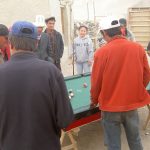 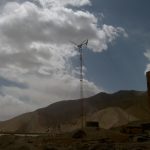