Talking about Badminton in Chinese Posted by Ayana on Apr 2, 2018 in Uncategorized 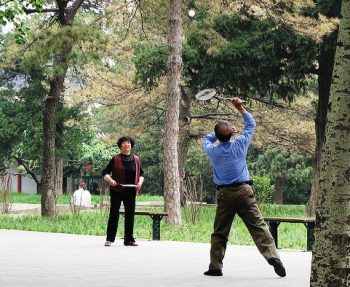 Badminton by booizzy from Flickr.com is licensed under CC BY-ND 2.0

One of the things I like about China the most is the fact that almost everyone has a badminton racket, and you will easily find someone to play with almost anywhere.

Chinese universities hold badminton courts; stationery stores sell shuttlecocks; and if you wish to engage in some physical exercises, chances are that one of your Chinese friends will willingly join you in a badminton session.

羽毛球is played indoor on a rectangular 羽毛球场, with a 羽毛球网 placed in its center. But 羽毛球 can also be played outside. If it’s not rainy or windy you and your partner can find a relatively flat ground and just start hit the shuttlecock. The racket and the shuttlecock are light, and the net is not necessary if you are playing for fun. Roaming around Chinese schools and universities, you will probably see couples of students 打羽毛球 that way.

Modern badminton was born in England.

Modern badminton was born in England in the 19th century, but games employing shuttlecocks have been played for centuries across Europe and Asia. Although versions of shuttlecock had been played in the middle kingdom much earlier, China (or any other Asian country) wasn’t one of the founding members of the International Badminton Federation. Nowadays, though, Asian nations have become dominant in the international competition of 羽毛球. In the past few decades, China became the great force on the badminton field.

Badminton was listed as an official competition in the 1992 Olympics games.

One of the Chinese gold medalists of 2016 was Chen Long (谌龙). Chen began to compete professionally in 2007, but won his first Olympic gold medal in the men’s singles badminton tournament only nine years later. When realizing he won, Chen wasn’t able to hide his excitement:

Badminton is an intensive sport. It requires agility, strength, speed and coordination. If you want to get in shape, to tone your body and to clear your mind, all while having fun, playing badminton is the answer. And if you want to play better use those tips:

If you want to play well, you must spend quite time exercising.

Badminton basic posture is the right foot half step in front of the left foot.

No matter where you are on the court, always come back to the start position immediately after each shot.