Temple Hopping in Kunming Posted by sasha on May 3, 2017 in Culture

There’s lots to do in the Spring City of Kunming, from walking around the Green Lake, to perusing the Bird & Flower Market, to enjoying the city’s awesome nightlife. Getting out of the city a bit, you’ve also got plenty of great options for day trips. We’ve already covered the Western Hills and the Botanical Gardens. This time we’ll do a bit of temple hopping. 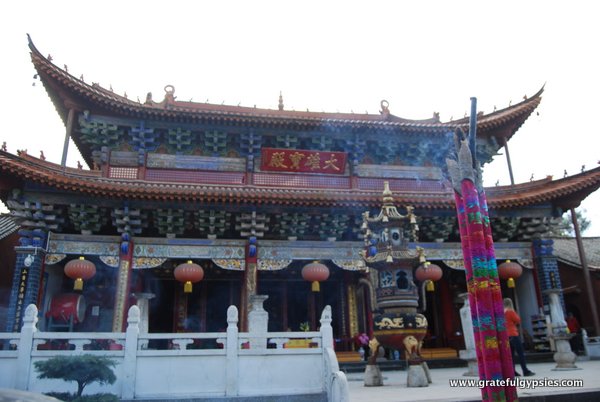 In the northwest of the city, you’ll find this ancient Buddhist temple on Yu’an Mountain (玉案山 – yù àn shān). As with so many things in China, there’s a fantastic story behind this temple. 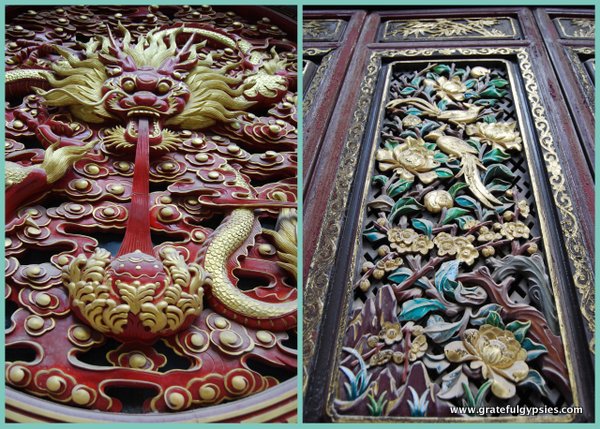 Beautiful carvings at the temple.

Back in the Tang Dynasty, two brothers were out hunting in the hills around Kunming. They spotted a rhinoceros, which they followed deep into the woods. All of a sudden, the rhino disappeared and some very unique monks appeared. When the monks noticed the brothers, they vanished into thin air. They left behind their walking sticks, which the brothers weren’t able to remove from the ground. The next day, the brothers returned to find that the sticks had turned into an entire bamboo forest. It was clear to them that this had been revealed as a sacred area, so they decided to have a temple built here. 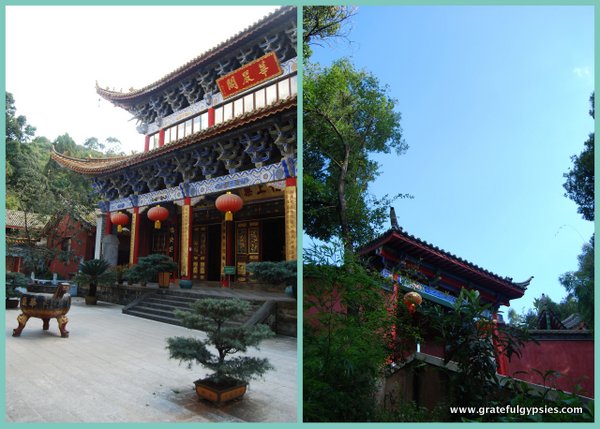 While you won’t find rhinos or magic monks, you will find the incredible 500 Buddhist arhats (五百罗汉 – wǔ bǎi luó hàn). In Buddhism, arhats are spiritual practitioners that have already achieved nirvana. They were created by Sichuanese artist Li Guangxiu (黎广修) and his students over a period of seven years. Like the Terracotta Warriors of Xi’an, each arhat is unique. They’re old and young, beautiful and ugly. They express anger, joy, and sadness. Photos aren’t allowed, so you’ll just have to go to the temple to see for yourself. 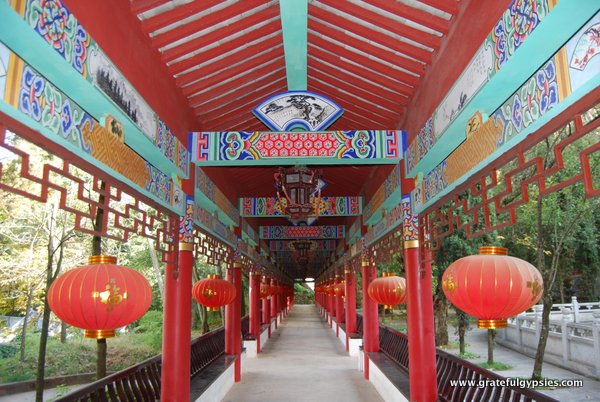 A great spot to relax.

There’s more to see in the temple complex, including a pond with a rhinoceros statue and a colorful walkway decorated in lanterns. It’s a great place to spend a few quiet, reflective hours out of the big city. If you get hungry, there’s a vegetarian restaurant on site, where you can of course eat bamboo shoots. 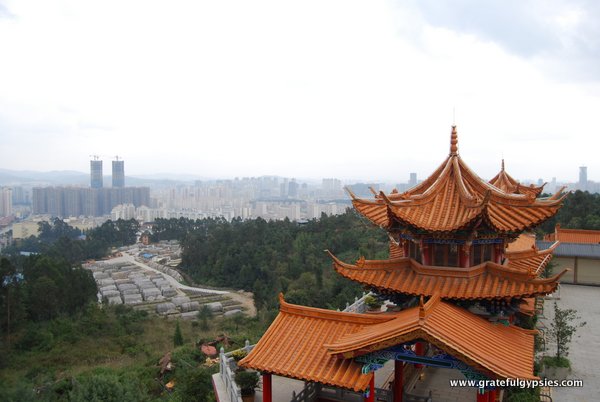 View of Kunming from Xuning Temple.

This stunning temple can be found on Kunming’s “Long Insect Mountain” (长虫山 – cháng chong shān). It has been there for over 700 years and is well worth the short hike to get to. Judging by the modest front gate, it doesn’t seem like much. Just wait until you get inside – recent renovations turned this into an absolutely incredible temple. 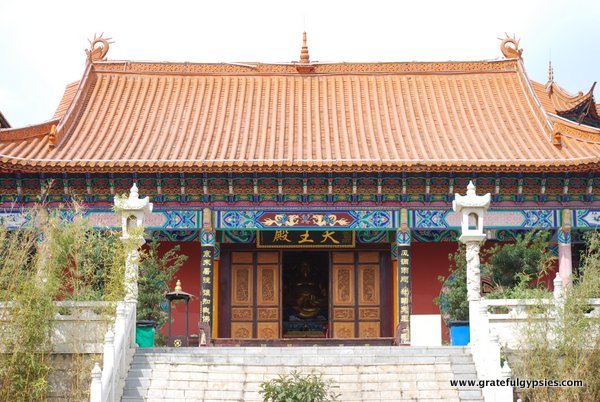 Definitely worth the effort to get here!

The first pavilion of the temple is reserved for the Four Heavenly Kings (四大天王 – sì dà tiān wáng), who watch over the cardinal directions. Continuing along, you’ll find a grand square and finally the main hall. 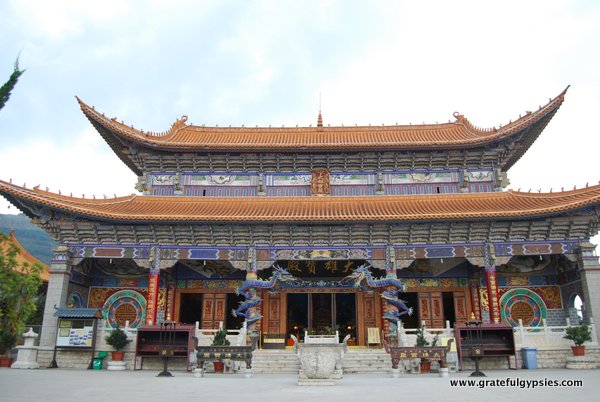 With vibrant colors and two twisting dragons guarding the entrance, it’s quite the sight to behold. Take your time exploring, as there are plenty of intricate carvings, statues, and paintings to admire. 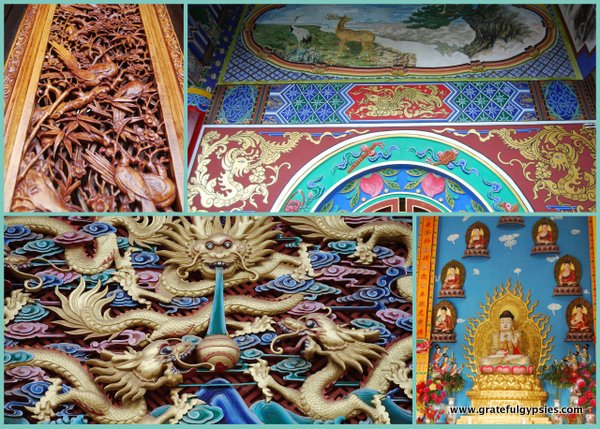 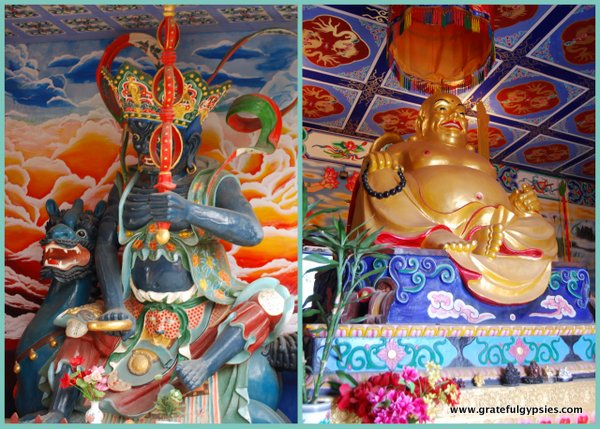 More statues in the temple.

Behind the temple complex is a massive 5-story circular structure. It’s dedicated to Guanyin (观音 – guān yīn), the God of Mercy, who is depicted atop the structure in three different poses. 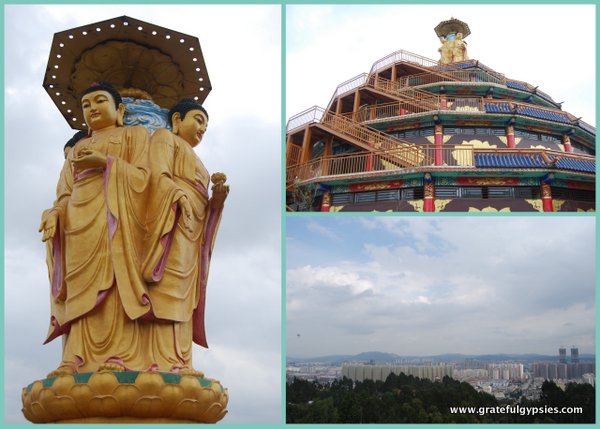 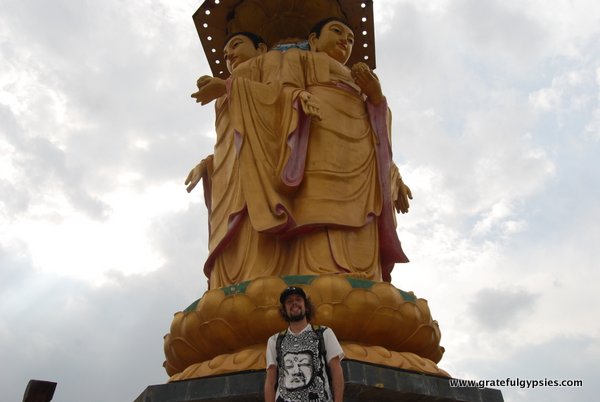 In my year living in Kunming, this was my favorite place to escape to. I’d often go up there in the middle of a weekday, when everyone else was at work or school. The only people I’d see at the temple were monks, who would always smile and wave. Standing atop the circular building with the Guanyin statue and looking out on the sprawling metropolis below always helped to clear my head. It’s hard to find a peaceful, quiet spot in a Chinese city, so it’s something I cherished and escaped to a few times. If you only visit one temple in Kunming, I’d suggest you go for this one.