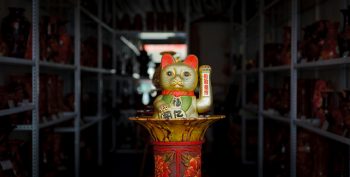 If you ever visited a Chinese restaurant, a Japanese store, or any other Asian business, you’ve probably noticed a small cat figurine perching quietly by the cash register, or placed in the doorway. The cat figurine is not only a cute decoration, but also a symbol of prosperity and good fortune. It’s a Japanese traditional idol but extremely popular in the Chinese culture as well. It’s usually called lucky cat, but also known as the welcoming cat, money cat, beckoning cat, or fortune cat in English. In Chinese, its name is simply 招财猫 Zhāocái māo.

It is unknown how the lucky fortune cat mascot came to be. Many legends tell the story of its origin during the Edo period in Japan (17th century–19th century). The most popular one relates the story of a feudal lord who passed by a poor monastery and was surprised to see a cat beckoned its paw, greeting him in. The feudal followed the cat, and soon after found himself taking a shelter in the monastery, since a violent storm erupted suddenly after his entrance. The grateful feudal became the benefactor of the cat’s monastery, and brought it prosperity. When the cat died, supposedly the first beckoning cat status was made in its honor.

The招财猫is a sitting cat who holds one hand high to the head and beckoning. Its raised paw waves in customers and invites good luck in its owner’s life. 招财猫 can be found with either the right or the left paw raised. There isn’t a strict difference between the left paw raised cats to the right paw raised cat. One opinion say that a right raised paw attracts customers during the day, while the left raised paw attract customers for night businesses. Another opinion asserted that a left raised paw waves in endless stream of clients and vigorous qi of buyers, while the right hand waves in wealth, money and happiness. This is why the right raised paw cats are more for a family use, and the left raised paw suit for commercial use. Some even suggest that the raised hand imply the sex of the cat: right hand for males, left hand for females. Sometimes both paws are raised, probably to attract customers and happiness together. Though others believe that two paws are raised in order to protect the business or household.

When only one paw is raised, the other paw usually holds a coin. Not a round coin as we are familiar with today, but a larger one that was in use during the Edo period in Japan. Written characters on the coin announce the total value – usually summed up to ten million ryo (a Japanese monetary unit). Another Edo feature is the dress of the cat. Most of them wear a collar, bell and a decorative bib. These items are most likely in imitation of what was common attire for cats in wealthy households during the Edo period. 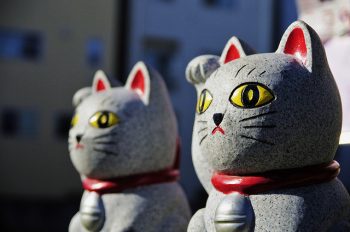 Fortune beckoning cats by yul* from Flickr.com is licensed under CC BY-SA 2.0

The Japanese cat is usually white, but I never saw a white Chinese lucky cat. While living and travelling in China I only noticed a golden kitten beckon me inside stores, restaurants and houses. But apparently, the cat comes in several colors, and each color symbolizes a different desire. White is to attract purity, happiness and blessing. Black is to ward off evil spirits. Gold is for wealth. Red is to protect from evil and illness. Pink is for love and romance. Green is for academic success.

The beckoning cat figurine is very popular in the Asian culture. It’s a must-have decoration and mascot to every place of business in China. And yet, as you can notice, its origin is blurred, the legends about its history are numerous, the meanings of which hand is high up are various, and the opinions about its color differ. Decoding this talisman is probably impossible, but hopefully now you have a clue about the connection between a waving golden kitten to a shop.