We’re almost finished with our countdown of our Top 10 places in Beijing, but we still have four great spots to explore. So far, we’ve hit the student hangouts, the art district, hipster central, local parks, man-made lakes, and some of the city’s most famous landmarks. After all that, I’d say it’s time for a good meal, fancy cocktails, a little shopping, and some wild nightlife. Where can we find all of that? In our #4 spot on the countdown:

Amongst Beijingers, whether they be local, waidi (outsiders), or laowai (foreigners), the names Sanlitun (三里屯 – sān lǐ tún) and Gongti (工体 – gōng tǐ) are synonymous with a good time – maybe too much of one at that. These meccas of shopping, dining, drinking, and partying bring out huge crowds every night of the week, and for good reason. In terms of Beijing’s nightlife (夜生活 – yè shēng huó), this pocket of the city definitely takes the cake. 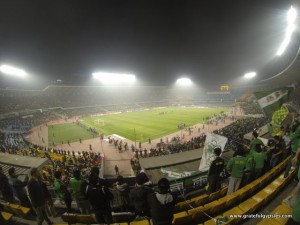 Get rowdy at a Goan game.

Let’s begin with Gongti. A short abbreviation of the Chinese word for the Worker’s Stadium (工人体育场 – gōng rén tǐ yù chǎng), this is the area where the city’s mediocre football club – the Guoan (国安 – guó’ān) – call home. During the spring and fall months, you can head to the stadium to catch a game – an experience not to be missed in Beijing. Pick up a profane t-shirt on the street, pound a few Yanjing beers (they don’t sell alcohol in the stadium), and head in to join the unruly masses of Chinese fans. There’s no better place to learn Chinese curse words than at a Guoan game; plus, where else will you ever be where it’s perfectly acceptable to yell “stupid c**t!” (傻屄 -shǎ bī)?

When nighttime rolls around, the area around the stadium turns into a bumping club scene. Whether you’re looking to join in the meat market at Vic’s or Mix, dance all night to international DJs, or dive into the Chinese club scene, you can find it all here. 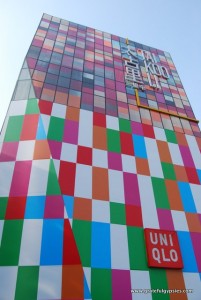 The Village, as I will always call it. 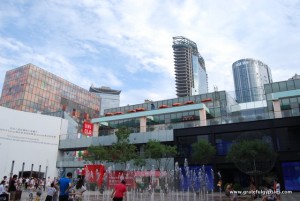 Just a few blocks away from the Worker’s Stadium, you’ll find the area known as Sanlitun. A few short years ago, this place was the dregs of Beijing society. It was full of sleazy bars, ladies of the night, drug dealers, and hammered drunk backpackers and expats. Ok, well, it’s still full of all of those things, but at least it has a nice fancy shopping mall as well! Tai Koo Li (or the Village, as most Beijingers will always call it), is a prime example of China’s rush to modernize – high-end Western brands, boutique shops, a cinema, and dozens of fancy bars and restaurants.

For shopping, you can check out Yashow Market (雅秀市场 – yǎ xiù shì chǎng). It’s incredibly touristy and everything is fake, but you can bargain there and get things for dirt cheap. Just don’t be surprised if they fall apart or break down. If you’ve got a higher budget, the Village is full of options and famous brands such as Nike and Apple. 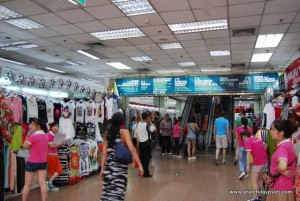 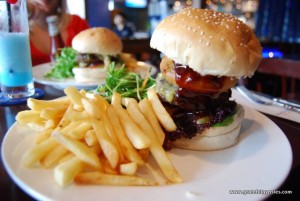 1/2 price burgers are there if you know when to go!

Options abound for dining in and around the Village. Great deals can also be found here; drop in Blue Frog on Monday for buy-one-get-one burgers or Flamme on Tuesdays for the same deal on steaks. There are also plenty of Asia restaurants, such as Spice Spirit (Chinese) or Hatsune (Japanese). You can get a craft beer at the Drive-Thru over in SOHO, or a strong cocktail at the always-fun Stumble Inn. 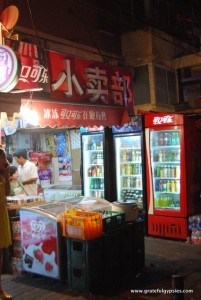 The local xiaomaibu – my favorite spot. 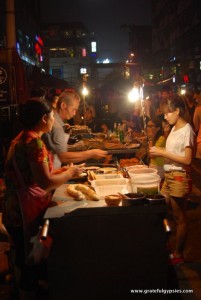 Thankfully, for those of us who prefer street food and a beer that costs less than a dollar, the back street continues to be the place to go for debauchery in the Chinese capital. Every night, revelers pack the street, either sitting down for some hot and spicy soup or kebabs, pounding cheap beers at one of the many xiao mai bu (small shop – 小卖部 – xiǎo mài bù), or downing cheap liquor in very questionable bars.

If you dig a little deeper, there’s even more to SLT. Over in Sanlitun South, you’ll find Beijing’s best pizza and free beer on Tuesdays at the Kro’s Nest, awesome Mexican and Thai food, and even more bars. For tons of people who call Beijing home, SLT is the preferred place to see and be seen. 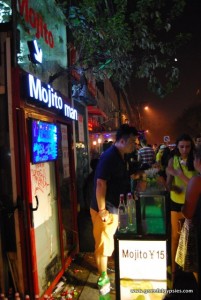 Get a drink from the “Mojito Man” for just 15 kuai.

It should be noted that there is a “Bar Street” (酒吧街 – jiǔ bā jiē) in Sanlitun. It’s very noticeable, with its offensive neon lights, blaring music from cheesy cover bands, and push touts on the sidewalk. Unless your idea of a good time is a bottle of Tsingtao for 50 RMB, sloppy drunk Chinese men, poor Chinese versions of Michael Jackson songs, and amateur pole dancers, this place is better avoided.

With live sports, tons of shopping options, food for every taste and budget, tons of watering holes, insane night clubs, and a constant party on the street, it’s hard to beat a night out around Gongti and SLT in Beijing. Stay tuned as we get into the final three spots on our list.