Wedding Photos in China Posted by Ayana on Mar 4, 2019 in Uncategorized 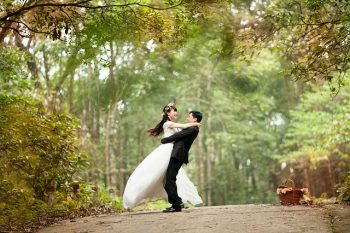 Wedding photos in China during Mao’s regime, especially during the Cultural Revolution (1966-1976), were simple. So was the wedding ceremony itself. The couple wore their everyday clothes, the gifts included copies of Mao’s Little Red Book, and the celebration consisted of a simple meal and revolutionary songs. But, things have changed. Weddings are devoid of Communist propaganda, and the pictures are not only for documenting the event.

The new trend of Chinese wedding photos (婚纱照 hūn shā zhào) takes place separately from the wedding ceremony, usually weeks and even months before the wedding day. The pictures are actually pre-wedding pictures, ready to be presented during the reception and, of course, displayed on social media. The pre-wedding pictures are top priority for many couples, and the wedding photography industry in China is thriving. Photography studios (影楼 yǐng lóu) provide makeup, hair design, different outfits, and varied backdrops to the soon to be 新人 (xīn rén, newly married couple ).

Many couples want to shoot an exceptional wedding photo.

A wedding is an exciting, once-in-a-lifetime event. Many are willing to spend a lot to celebrate it in style. They won’t settle for pre-wedding pictures taken in a studio (工作室gōng zuò shì) with an inanimate background. They take advantage of the occasion to shoot glamour wedding pictures outside (外景wài jǐng), changing outfits and locations (地点dì diǎn). Some use editing software to obtain highly creative photos, like the couple in this video:

In recent years it became popular to travel to a scenic resort, such as Sanya in Hainan Island, the port city Xianmen in Fujian province, or Lijiang known for its beautiful old town in Yunnan province. It’s called 旅拍 (lǚ pāi), and it means traveling (旅行 lǚ xíng) and shooting (拍 pāi). The Taobao website offers different travel photography packages (拍摄套餐 pāi shè tào cān) from various studios. Every package costs thousands of RMB, so it’s important for the bride and groom to scrutinize what the package includes. The studios try to attract couples with unique style, personal service and, attractive offers. They even promise: 拍摄不满意重拍 (pāi shè bù mǎn yì chóng pāi, if you won’t be satisfied we’ll shoot again).

What does the photography package include?

Some lovers (情侣qíng lǚ) even take it further, and travel abroad  (国外guó wài) to take pre-wedding photos. The actors Nicky Wu and Liu Shishi, for example, took their wedding pictures in New Zealand. The actors Qian Yongchen and Lu yi travelled to Bali to shoot their photos.

But shooting in mainland China (国内guó nèi) can provide unusual pictures as well. Consider the pictures of newlyweds Ji Yuting and He Tao, who set off for a yearlong trip across the country to explore love and China. They shot 56 pictures wearing the traditional outfits of China’s 56 ethnic groups. Another brave Chinese couple shot adventurous pictures atop Chaya Mountain in Henan province. Wearing a tuxedo and a wedding dress, they climbed the 135-meter cliff to shoot extraordinary (与众不同yǔ zhòng bù tóng) pre-wedding photos while holding onto bars nailed in the cliff. Many netizens praised the couple’s courage. But some argued: “婚纱照不要紧，命更重要啊！”( hūn shā zhào bù yào jǐn, mìng gèng zhòng yào a!, life is more important than wedding pictures!).