西安 (xī ān) is a one of China’s oldest cities and has been a cultural and historical landmark throughout China’s history. At various times, this walled city of Shanxi Province or 陕西 (Shǎnxī) functioned as the capital city of China, and the home of the first imperial families.

For millennium all roads have led to and through Xi’an, the most prominent of which being the Silk Road, which terminates just inside the massive walled city. For travelers completing their daunting journey across the Gobi desert, Xi’an stood as a beacon of civilization, rewarding their trek with unimaginable silks, spices, goods, and technologies.

西安 (xī ān) translates as “western peace”–a fitting name for a western capital. But prior to being called Xi’an the massive walled city was called Chang’an or 长安  (Cháng ān) which means “perpetual peace”. However, years of clan fighting and warlord campaigns throughout the area made the concept of “perpetual peace” seem ill-fitting so the name changed over the years. Yet as Xi’an became more involved in the Silk Road and trade, its moniker as a pathway to the west soon became common place first calling it 安西 but then reversing the order to 西安 for whatever reason. Maybe because the name sounded so similar to a Buddhist concept of the afterlife known as the “western paradise”. Go figure.

When you think Xi’an you usually think Terra Cotta Warriors or 兵马俑 (bīngmǎyǒng). These life-like, clay figures of Chinese warriors were created in the first imperial dynasty of China, the Qin or 秦朝 (Qín cháo). During that time, a crazy or “misunderstood”  first emperor named Qin Shi Huang (秦始皇), literally translating as”first emperor”, decided that he needed an army of thousands of life sized and intricately carved clay soldiers, horses and warriors to be buried with him as protection to help fight his enemies in the afterlife.

Paranoid much? Suffice it to say, he wasn’t a very well liked emperor, and his tomb, along with his standing army of clay men, were ransacked, buried and forgotten until 1974.

For more, check out this National Geographic piece on the Terra Cotta Warriors:

Xi’an is also home to the largest wall I have ever seen which literally surrounds the entire city. This “city wall” or 城墙 (chéng qiáng) was reconstructed during the 14th Century and has stood solidly for centuries. From the outside, Xi’an looks like a medieval fortress, yet the interior hides a thriving metropolis of ancient and modern architecture.

Even on a rainy day, wandering around the wall is a worthwhile endeavor–albeit very slippery. I decided to do a lap around the city via bicycle-cart with the help of my chauffeur or 司机 (sī jī). As we circled the city, various displays of architecture (from 7 different dynasties!) grabbed my attention, including the famous Bell Tower of Xi’an located smack dab in the middle of the city along with the ancient (over 1,000 years old) Wild Goose Pagoda near the outskirts.

The rain didn’t let up, and after thoroughly soaking myself and my driver, I decided to call it quits and seek shelter indoors. Luckily the rumble in my stomach or 肚子 (dù zi) convinced me to head straight for the nearest packed restaurant. Boy, was I in for a treat.

Food-wise, Xi’an is famous for its dumplings or 饺子 (jiǎo zi), which are eaten in massive banquets with almost every kind of filling you could imagine. If you love dumplings as much as I do, Xi’an is your food Mecca. They have traditional steamed dumplings, boiled ones, juice filled ones, fried ones, even dumplings on a stick! If you are in Xi’an, you MUST partake in a dumpling banquet, it only to fully understand the meaning of 吃包了 (chī bāo le)–“absolutely stuffed”.

After snacking on some dumplings, I took a stroll down “food alley” seeing what else Xi’an had to offer. Because of Xi’an’s location along the Silk Road, Muslim and Central Asian culinary styles have influenced the food, providing some of the best lamb and noodle dishes I’ve ever tasted.

Here Muslim and Han styles of food have been mixing and evolving for centuries, benefiting the stomach of every person who steps inside the walled city. For an in-depth look at the “must eat” famous foods of Xi’an check out this article. 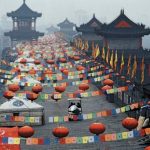 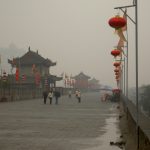 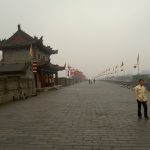 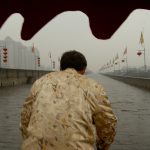 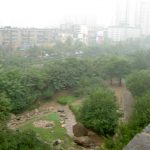 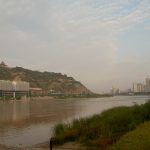 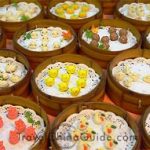 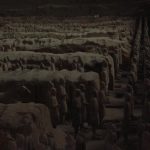 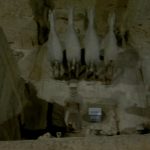 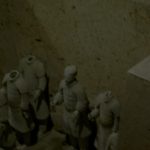 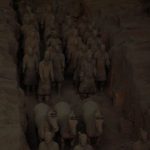 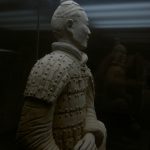 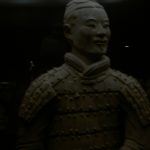 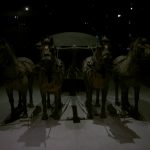 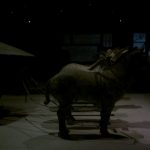 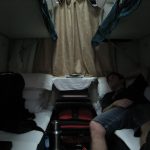 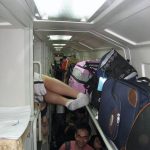