Sprites of Christmas Posted by Bjørn A. Bojesen on Dec 25, 2014 in Traditions 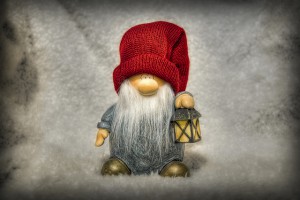 A Scandinavian nisse. (Thanks to Anders Palovaara at Flickr.)

If you go to Skandinavien in december, you’ll most certainly encounter little men (and women) with pointy røde huer (red caps) everywhere: In butikker (shops), in private homes, in fjernsynet (television). No, you’re not mad! Say hello to the nisser [NESSore]…

The typical nisse looks like an old man with a langt, hvidt skæg (long, white beard) – except that he’s really small, like a child or even a rabbit. He’s wearing traditional clothes such as træsko (clogs, literally ’wooden shoes’). He’s often got tykke, røde kinder (fat round cheeks) and a jovial look. I think you wouldn’t mind having a grandfather like that! 🙂 On top of his head the famous nissehue looms large. It isn’t just a red version of a wizard’s hat – there typically is a white or red kvast (tuft) at the end.

Originally, a nisse was a kind of mythical being that helped farmers on their gård (farm). If the farmer didn’t treat him well, he could avenge himself by making sure that the cow gave birth to a calf with two heads – that kind of thing. There’s a Danish saying: Nissen flytter med. (The nisse moves house with you.) That means: Your problems keep following you…

Today nisser (or julenisser) are mostly associated with jul (Christmas) and sjov (fun). Sometimes they’re mixed up with Julemanden (Santa Claus/Father Christmas). He was introduced to Scandinavia from the US, though, and hasn’t got very much in common with the Scandinavian nisser – except that they all wear red caps. Nisser aren’t just old men; there are also nissekoner (nisse wives) and nissebørn (nisse children).

Nisser make dark nights bristle with liv [leew] (life), and I can’t imagine Christmas without them. One of the most beloved julesange (Christmas songs/carols) for children starts like this:

in the loft the nisse’s sitting with his Christmas porridge

his Christmas porrigde, so good and sweet,

’cause Christmas porridge is his favourite food.