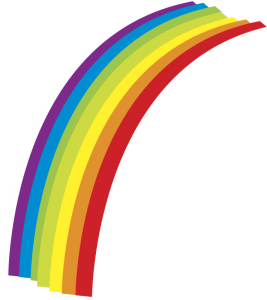 ’Regnbueaktivist’ was one of the words nominated as the Danish ”word of the year”. (Free image from Open Clipart.)

Every year a handful of Danish language geeks kårer årets danske ord (elect the Danish ”word of the year”). This year, Sproglaboratoriet (’The Language Lab’), a Danish radio programme, had nominated the following twelve ord:

• Byhaver (’city gardens’) are small gardens that have become popular in Danish towns and cities. They may be shared by more than one owner, and folk (people) are careful to ensure that every addition to their little piece-of-wilderness is økologisk (biodynamic) and miljøvenlig (’enviromentally friendly’).

• Digital borger (’digital citizen’) refers to the fact that e-mail and internet skemaer (forms) are replacing letters between det offentlige (public services/the State) and borgerne (the citizens) everywhere in Denmark. Just a couple of years ago people used to receive things like their selvangivelse (tax form) in their postkasse (letter box); now everything is done on Internettet using NemID [nehm ee deh] (’Easy ID’, a kind of password generator).

• Girafgate. Do you remember the terrible killing of the giraffe Marius back in February? Inspired by the American ”Watergate” scandal, someone mixed Danish with English to create this new word…

• Hverdagssexisme means ’everyday sexism’. Some people, most often kvinder (women), are still not treated with the respekt they’re entitled to according to Danish laws about ligestilling (equality of status).

• Inklusion. There’s a lot of talk about including immigrants better in the Danish society, including weak pupils better in Danish schools, and so on! 🙂

• Konkurrencestat (’competition state/country’). I’m not very much into politics, but whenever politicians bang on about Danes having to ”work harder” I imagine they have this word written all over their brains… Little Denmark competing against giant countries like Kina and USA. Wow.

• Madspild means ”waste of food” and is a problem everywhere in the world, not just in Denmark! 🙂 That said, there’s a group of people here, called skraldere (dumpster divers), that try to save some of all the fresh mad that supermarkeder dump in containere every day.

• Mobilepay is an app that makes it easy to transfer money between different kontoer (accounts). This app has become so popular that it’s become a verb: ”Jeg mobilepay’er dig lige 20 kroner.” (”I ’mobilepay’ you 20 Kroner in a sec.”)

• Nødløgn (’necessity lie’) is a kind of ”little lie” you say to save yourself. If you’re a guy with an overweight wife and she asks you if she looks fat, a nødløgn could come handy… 🙂

• Regnbueaktivist (’rainbow activist’). Hm. I guess this refers either to gay/lesbian activists, or Greenpeace activists! In 2013, the Danish Greenpeace activist Anne Mie Roer Jensen spent many weeks in a Russian prison because of a protest against Russians drilling for oil in the Arctic…

• Retænke should’ve been ”gentænke” (re-think) in ”proper Danish”; this looks like a fun mix of Danish and Latin languages!

And the winner was … mobilepay!

Last year the winning word was the good, ole Danish word undskyld (sorry!), so a number of people protested that an English word was elected… Well, in 2014, lots of people in Denmark mobilepay’ede (’mobilepaid’) each other, and talked about it, and that’s the way words get popular, no matter how you feel about them. 🙂