Trolls of Denmark Posted by Bjørn A. Bojesen on Feb 25, 2016 in Traditions 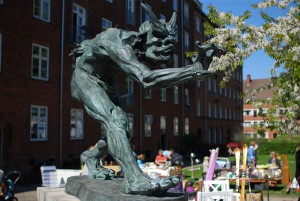 A troll attacking a church in Valby. (Photo courtesy of Thomas Angermann at Flickr.)

Did you know Danmark is full of trolde [trolleh] (trolls)? Ads often want to tell turister (tourists) a ”modern” story about Danish design and H.C. Andersen, so if you haven’t seen en trold in the streets of Copenhagen, it’s probably not your fault! 🙂 Trolls, however, have been around since vikingetiden (the Viking age) – not only in the bjerge (mountains) of Norge og Sverige (Norway and Sweden), but also in the Danish skove (forests), heder (moors) and enge (meadows)…

Danish trolls liked to kidnap women and sometimes men. This was called at bjergtage (”to mountain-take”), as the troll would bring his offer (victim) to his høj (mound). If the human ever escaped, she would never be the same again! Tiden (Time) passed differently among trolls, so maybe all her venner (friends) would be dead. In Gjern in Jutland there is a nice hilly area with a real troldhøj you can climb. Pas på trolden! (Beware of the troll!) 🙂

Danish trolls hated kirker (churches) and in some places you can see huge sten (stones) that almost hit the church! Øv! (d#mn!) the troll must have shouted. Sometimes trolls tried to spice up things a bit by swapping a human baby with their own troldunge (troll kid). This unnatural kid was called a skifting. People i middelalderen (in the Middle-Ages) feared getting a skifting, since it was stupid and would just æde og æde (eat and eat).

I recently had to do some troll research (yeah!), and here’s a very Danish troll story I found:

In Holme in the Århus area a farmer woman was visited by a troll, who told her: I dag gifter Store Bjerg sig med Lille Bjerg, lån mig en tønde øl! (Today Big Mountain is marrying Little Mountain, borrow me a barrel of beer!) The troll was shocked to see that there were kors (Christian crosses) painted on the woman’s barrels. The woman wiped away the cross from a barrel, and gave it to the troll. Three days later it returned to thank her with a barrel of high quality troll øl (beer)! 🙂

A couple of links:

• Denmark is famous for its Gjøl troll dolls – if you’re into that kind of stuff, take a look here.

• Here you can see nice drawings of many Danish creatures, including Elves and nisser – there’s also some Danish text you could try to read…