What’s Up with Denmark and Vikings? Posted by Bjørn A. Bojesen on Sep 30, 2020 in Uncategorized 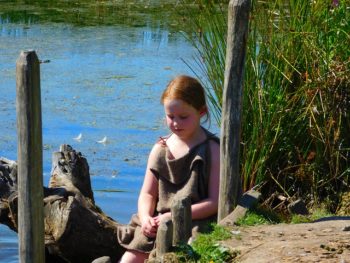 I don’t know if the TV series Vikings created a lot of Danish learners. Still, since it first aired (2013), many people around the world have become curious about the fierce Scandinavian warriors. No, you can’t chat to them. But 2020 Danish wouldn’t be there without their input, so let’s grab a glass of mjød [myoth] (mead) and visit vikingerne.

(I should say that I often freelance about Vikings elsewhere, so I have lots of background knowledge here! 🙂 )

Hvad er en viking? (What is a Viking?) Basically, a Viking was a pirate from Scandinavia more than 1000 years ago. The earlier Scandinavians had mostly been homebodies – until somebody invented the smooth langskib (Viking longship) with sejl [sile] (sail). This tech enabled the Scandinavians to sail to faraway lands and plunder (and trade – they weren’t savage all the time!) In 793, a Viking fleet attacked the English island of Lindisfarne. This marks the beginning of vikingetiden (the Viking Age – which ended in 1066, when the Norwegian king Harald Hardrada died trying to conquer England the Viking way). BTW, notice how the Danish word viking (plural vikinger) takes an -e ending in compounds: vikingeskib (Viking ship).

Hvad er sammenhængen mellem vikingerne og dansk kultur? (What is the connection between Vikings and Danish culture?) A lot, since Denmark was the most densely populated of the territories where Vikings lived! 🙂 This made Danish kings such as Harald Blåtand (Harold Bluetooth) and his son Svend Tveskæg (Swain Forkbeard) extremely influential (check out the circular ramparts, ringborge, built by Mr. Bluetooth). From their power base in Denmark – which back then included Southern Sweden – Danish Vikings set sail and raided in England, Ireland, France, Spain, Italy… They also created settlements in England (Danelagen – the Danelaw) and the French region of Normandy. In addition, at the bottom of the Jutland peninsula, Viking kings controlled the rich trading town of Hedeby at the border fortification Danevirke. One Danish Viking king, Knud den Store (Canute the Great) became so powerful he at one time (around the year 1030) ruled both England, Denmark and Norway.

Hvad er sammenhængen mellem vikingerne og dansk sprog? (What is the connection between Vikings and Danish language?) Vikings spoke oldnordisk (Old Norse), which is the ancestor of modern Danish. The Danish language has evolved further away from its source than for example Norwegian, but the Norse influence can still be seen (and maybe felt) everywhere in Danish. A good example would be weekday names – onsdag (Wednesday) actually means Odins dag (Odin’s Day), and torsdag (Thursday) means Thors dag (Thor’s Day). The Danish Vikings also left a huge impact on the English language, which is why Danish words such as kniv, æg and vindue should be easy to figure out for an English-speaker – those words were actually taken from Danish Vikings! 🙂

Hvor kan jeg lære mere om vikingerne i Danmark? (Where can I learn more about the Vikings in Denmark?)

Some nice places to go:

If you go south of the Danish border, you can also visit Hedeby and Danevirke in Schleswig, Germany.