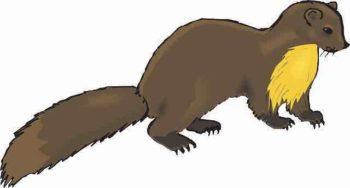 ”I’m a mink farmer from Hjørring [town in Northern Jutland]!” A man tries to impress a woman with a witty line in a pedestrian city street at night, just before the bars close at 10 PM due to COVID-19. She smiles – it’s early November, and Danish minks are suddenly the talk of the global town.

Mink (minks) have been kept for their pels (fur) for generationer [gheneraSHOWnor] in Nordjylland (Northern Jutland) – men ikke længere (but not any longer). This efterår (autumn), the Danish regering (government) warned that several minks were infected with corona. What’s worse, the virus started mutating inside the bodies of the furry animals, spreading back to mennesker (humans). All of a sudden, everybody was bange (afraid) of a possible COVID-20, unstoppable by any vaccine [vaxeeneh].

What would you do if you had infected dyr (animals) in your home? Danish statsminister (Prime Minister) Mette Frederiksen took no chances, telling at a November 4th pressemøde (press conference) that alle mink were going to be aflivet (killed, literally ”off-lifed”). On November 6th, the northernmost kommuner (municipalities) of Jylland (Jutland) as well as the island of Læsø went into a strict lockdown (that locals had to endure for two weeks). Foreign countries were also reacting swiftly, with the UK temporarily banning Danes from entering Britain.

For almindelige mennesker (ordinary people), it all seemed a bit unbelievable. Minkavlerne (the mink farmers) were furious at the government, as they had to kill and destroy not only the infected animals, but absolutely alle mink, literally hundreds of thousands of them. (Remember the reactions a Danish zoo got when they killed a giraffe? Yes, I know it’s not quite fair to compare the two situations; I only mention it to highlight just how massive the mink killing has been.) Although the mink farmers did get a fair share of money for each lost mink, many told the media that they had absolutely no idea what to do in the future.

It later turned out that some of the politicians had broken Danish laws by ordering all minks to be killed. There was a lot of angry discussions at Folketinget (the Danish parliament), which cost one minister (food minister Mogens Jensen) his job. There were also worries that some of the minks had been buried too close to people’s drikkevand (drinking water).

In the end, only experts will know if it was a good idea to destroy all the Danish minks. Some Danes certainly feel safer, while others may see the happening as a typical Danish molbohistorie (traditional story about foolish people from the Mols area): The best of intentions turn into a mess. In a weird corona situation, Denmark got the world’s attention in a totally unexpected way. For Danes in streets and homes, November 2020 was the month of the mink. 🙂