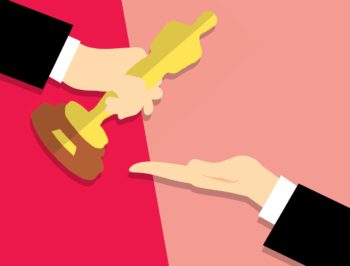 (Picture by mohamed Hassan from Pixabay; no copyright.)

And the Oscar goes to… For Danes, denne uges store overraskelse (this week’s big surprise) certainly was Oscar-prisen (the Oscar prize) awarded to the Danish film Druk [drawk]. Even though many people had guessed filmen (the film) would win the prize for bedste internationale film, it still felt surreal watching filminstruktøren (the director) Thomas Vinterberg happily lifting den gyldne statuette (the golden figurine).

I recall watching the movie i biografen (in the cinema) with a friend when the lockdown was temporarily lifted in my city last autumn. Det var en stor oplevelse (it was a great experience), and we kept discussing the film længe bagefter (long afterwards) – over en øl (over a beer)!

Yes, the film is very much about alkohol, and you’ll hear Danes’ favourite word skååål! [skawl] quite a few times! 🙂 The title Druk loosely translates as ”drunkenness” and is in fact historically identical to the English word drunk. (If you’ve got an eye for language history, you’ve probably already spotted a similar relationship between Danish tak and English thank. That’s right – long before the Viking age, speakers of pre-Danish would sometimes simplify -nk to -k.)

Well, the English-speaking world knows the film by the name Another Round, which does make sense, I guess. It certainly helped boost the film’s international appeal that the main character is played by Mads Mikkelsen, Denmark’s biggest name in Hollywood. (And the rest of Scandinavia is pulled into the film by the protagonist’s wife, played by the famous Swedish-Norwegian actress Maria Bonnevie).

Without spoiling more than you might already know from being an active Internet user, I can tell you the film starts with the question: What would happen if people were constantly a little bit drunk in their everyday lives? Four male gymnasielærere (teachers at an upper secondary school), who are really bored with their lives, decide to give it a try…

Of course, the film would never have won an Oscar if you just saw Mikkelsen and his venner (friends) acting drunk. The film gets quite profound after a while and touches themes such as venskab, død, kærlighed (friendship, death, love). And it is very, very Danish (øl and community singing, anyone?) If this is too much for you, you can of course always focus on the subtitles and see how much of the Danish dialogue you get ”by ear”. 🙂