A Danish Lesson from Italy Posted by Bjørn A. Bojesen on May 31, 2021 in Culture 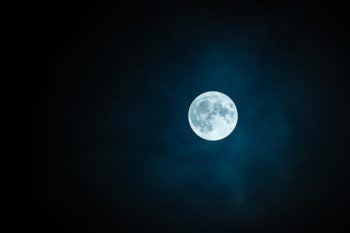 (Picture by Robert Karkowski from Pixabay; no copyright.)

Måneskin! [mawneh-sken] This month, millions of music fans learnt a rare Danish word straight from the poetry box. The unlikely incident happened when the 2021 Eurovision Song Contest was won by the band … Måneskin from Italien (Italy)!

Måneskin is the perfect example of a Danish sammensat ord (compound, literally ”put-together word”). Måne [mawneh], of course, is ”moon”. Can you guess skin? No, it isn’t the skin you’re in, but the bright shine from something emitting (or in this case reflecting) lys (light). 🙂 If Danish and English were true twins, Måneskin would be ”Moonshine” in English. But alas! things aren’t that straightforward, and the correct English translation of the name is – Moonlight.

Now to det store spørgsmål (the big question): Why would an Italian band pick a Danish name for itself? One Danish friend exclaimed: But Italian is much more beautiful than Danish! Another friend thought the name was chosen because of the exotic letter Å – many rockers just love Scandinavian letters, apparently.1The heavy metal band Motörhead is a classic example of this.

Surprise, surprise! Turns out one of the band members, Victoria de Angelis, has en dansk mor (a Danish mother).2and an Italian father Danish TV quickly discovered that hun taler flydende dansk (she speaks fluently Danish). The Danish journalists were literally over the moon when they found out she misses rugbrød (Danish rye bread), sometimes visits family members in Denmark, and has taught her bandmates how to say tusind tak (thanks a lot, literally ”a thousand thanks”). Now, it didn’t matter that much that Denmark lost this year’s show. In typical Danish fashion, everybody was quick to claim Victoria’s victory as their own. Yes, officially Italy won, but she does speak Danish, you know… 🙂

According to Victoria, her bandmates once asked her to come up with a list of Danish words. One of them was måneskin, which they liked and eventually picked as their name (despite the confusion created by the letter Å!)

Fun fact: The word already has a strong Italian connection in Danish pop. In her 1978 hit Se Venedig og dø (See Venice and Die3The song was famously written by the Danish pop star Kim Larsen and gifted to Kellerman. It’s also very well known for using the word gajoler – small liquorice lozenges – as a slang reference to the breasts of the song’s heroine.), Lone Kellerman sings these immortal lines to her Italian lover:

Do you remember when you said I’m yours

And you were singing sonatas in the bright moonlight

Listen to the song here:

And although it is definitely not in Danish, you can watch Måneskin below with their winning song Zitti E Buoni 🇮🇹: