3 Things You Have To Know About Broodjeaapverhalen! Posted by Sten on May 23, 2016 in Culture, Dutch Language, Dutch Vocabulary

You may have heard of them – Broodjeaapverhalen (Bread with monkey stories)! But maybe you haven’t! What is a broodjeaapverhaal? And why this weird name? What about a famous story?

Broodje aap! But what does it mean? 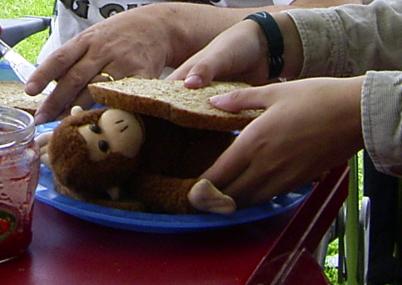 An actual broodje aap. (Image by TeunSpaans at Commons.wikimedia.org under license CC BY SA 3.0)

But what is a broodjeaapverhaal? It is a verzonnen (made up) story that is passed on as waar gebeurd (truly happened). Often, it is unclear who or what the bron (source) is of these stories, and they are more often than not sensationeel (sensational) and bizar (bizarre). They play on people’s angsten (fears) and vooroordelen (prejudices).

2. Broodjeaap. Where does this name come from?

The boekje (little book) Broodje Aap by Ethel Portnoy from 1978.

The name broodje aap, as we have seen above, does not make a lot of sense by itself. Where does it come from? In 1978, Ethel Portnoy published a boekje (little book) that bundled stories that can be characterized as stadslegendes (urban legends). She titled the book after one broodjeaapverhaal which claimed that certain restaurants serve broodjes apenvlees (breads with monkey meat)!

3. What is an example of a broodjeaapverhaal?

So what kind of stories do their rounds? In the video above, Peter Burger, who wrote his PhD on the topic, explains: Een van de gekste broodjeaapverhalen die op het ogenblik nog lopen is het verhaal dat inbrekers geheime tekentjes naast de deur zetten. Wat ik fascinerend vind is dat politieagenten, of vooral politieagenten, deze tekens verspreiden. (One of the craziest bread with monkey stories that are still running at the moment is the story that burglars put secret marks next to the door. What I find fascinating is that police officers, or especially policer officers spread these marks.)

Obviously, broodjeaapverhalen can be quite grappig (funny)! But they can also be gevaarlijk (dangerous), because what if they are trusted, even though they are not true at all? This can lead to quite some verwarring (confusion)!

But here on this blog, we are safe! If you have a broodjeaapverhaal that you want to share, comment below, or send us one via Facebook by clicking on the button below, and maybe we will post it on our Facebook page!