5 Things You Didn’t Know About NYE In The Netherlands Posted by Sten on Dec 28, 2015 in Culture

The most popular and striking feature of NYE in the Netherlands is all the vuurwerk (fireworks). It is normal in many countries to use fireworks at New Year’s Eve, but I don’t know another people that is as into it as much as the Dutch. I live on the border in Germany, and every year when the vuurwerkverkoop (fireworks sale) begins, you can find the Dutch gele nummerborden (yellow car plates) everywhere here in Germany, all looking for the best and cheapest deals on vuurwerk.  Last year, 70 million euros were spent on fireworks for NYE! Most popular among these are rotjes (firecrackers) and vuurpijlen (skyrockets).

Of course, it also has its dangers, and therefore, more and more Dutch municipalities decide to ban fireworks in so-called vuurwerkvrijze zones (fireworks free zones), which are especially established around sensitive areas like schools and nursing homes. They have municipal fireworks instead. This year, the number has climbed to at least 56 municipalities this year.

St. Silvester (Image by Marie-Lan Nguyen at Wikimedia Commons under CC BY 2.5)

In the Netherlands, New Year’s Eve is normally called oudejaarsavond, and together with January 1 oud en nieuw. Sometimes, though only rarely, it is called Silvester, after saint Silvester. The Catholic church proclaimed December 31 as the feast day of this saint and former pope, as he died on December 31, 335 AD. After many failures to implement a religious meaning around NYE, this one stuck. And now, for example in Germany, NYE is mostly called Silvester.

A reason why this did not stick as much in the Netherlands might be the protestant majority of the population, that was historically very reluctant to follow the Roman Catholic church. Another reason I could imagine could be the pronunciation of Silvester, which is not the most natural in Dutch. And to this day, oudejaarsavond stayed. 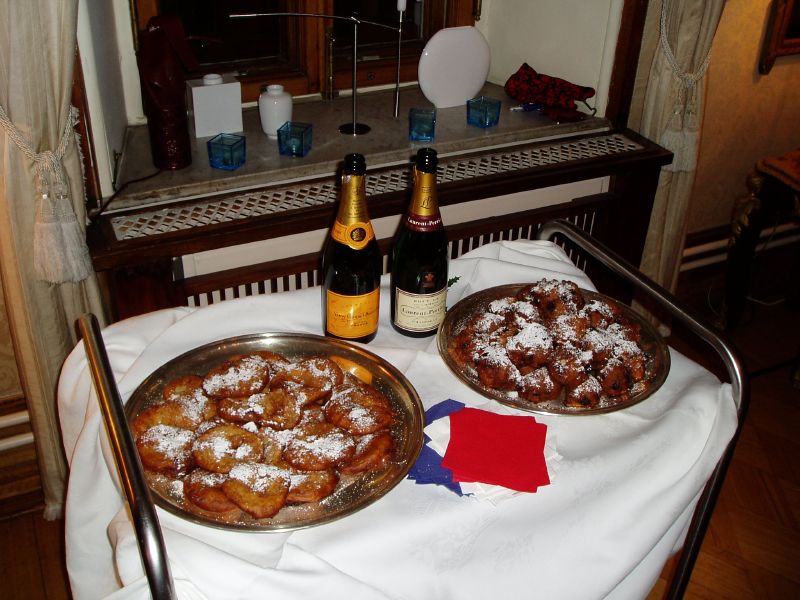 Oliebollen en Appelflappen (Image by Maarten at Flickr.com under CC BY 2.0)

Oliebollen and Appelflappen are the traditional Dutch fried foods for oudejaarsavond. They are sold all over the Netherlands the few days before NYE. You can find a gebakkraam (a sort of “cake stall”) in every village, and get some fresh oliebollen and appelflappen!

I am not sure how to translate both of the words, but literally they mean “oil balls” and “apple flap”. I came across a nice translation, the best possible, I think:

One tradition that began as soon as seconds could be measured by regular clocks was aftellen (counting down). One quite popular way to do it is aftellen op de TV (counting down on TV). A NYE show is put on, and people start counting down, standing all together with their sparkling wine…

That is basically how it goes every year. Everybody in the room gets 3 kisses or a handshake and a wish for a gelukkig nieuwjaar. But it does not stop there…

A Flemish nieuwjaarskaart (Image by MaDe at Wikimedia Commons under CC BY-SA 2.0 BE)

The Dutch wish each other de beste wensen (best wishes) for weeks after oudejaarsavond to almost everyone they meet. They even go around the days following January 1 to give neighbors and other friends de beste wensen. And if a friend lives too far away, they will receive a kaartje (post card). It is strange to see the almost compulsory nature in which these wishes are brought forth, but the tradition started somewhere…

Back in the days, customary to give some money if somebody wished you the beste wensen. Of course, this had the potential to be very lucrative, and not before long, everybody started doing it! Of course, people stopped giving money for this, but the wishing remained. And now, we wish everyone the best, entirely for free!

How is New Year’s Eve celebrated in your country?