It is Pasen (Easter)! On Easter Sunday, the Dutch have a few traditions they follow, and one that I am highlighting today are a very popular food item: matzes!

Why Do The Dutch Eat Unleavened Flat Bread during Easter? 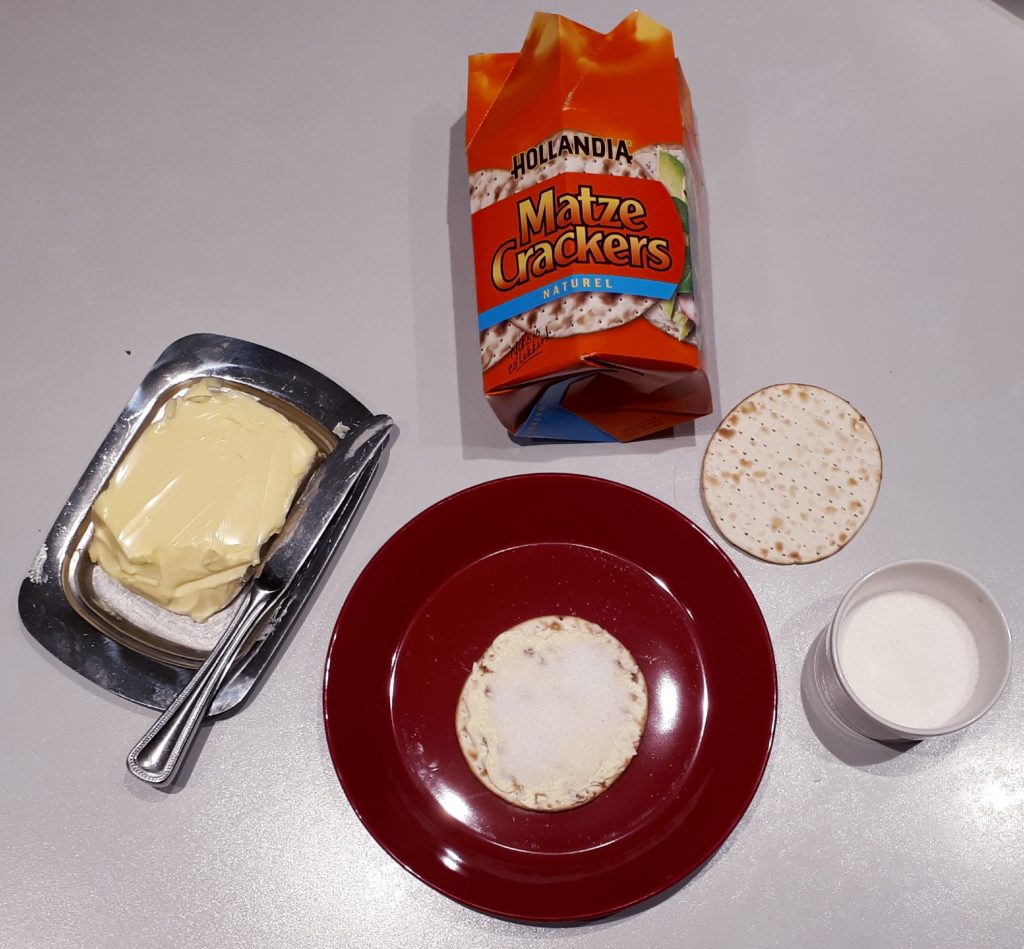 During the Paasontbijt (Easter breakfast), which is usually quite extensive, the Dutch eat these flat crackers a lot. You can get them throughout the year, but consumption definitely peaks during Pasen. Why? And why is it so popular in the Netherlands?

The matze, also spelled matzah, matza or matzo, is ongerezen plat brood (unleavened flat bread) that comes from the Jewish Pesach (passover) celebration. It is eaten in memory of the slavernij (slavery) of the Joden (Jews) and the uittocht (exodus) from Egypte (Egypt). Under the leiding (lead) of Mozes, the Joden had to vluchten (flee) very snel (quickly). There was not even time to let the bread rijzen (leaven)! And that is where this unleavened bread, consisting only of water and flour, comes from. In Jewish tradition, it is not allowed to have any leavened bread during the Pesach period – you cannot even buy it in Jewish stores!

Before the Second World War, many Joden lived in the Netherlands. During passover, they would gift matzes to their Dutch buren (neighbors). The Dutch have loved them ever since. They come in large and small (see above) and even mini sizes, as volkoren (whole grain) variant or biologisch (organic). They are especially popular with some boter (butter) or margarine (margarine) and suiker (sugar) sprinkled on top. There are other varieties, but in most cases, the beleg (topping) is zoet (sweet).

These days, matzes are eaten more by non-Jews than Jews in the Netherlands.

The Dutch know matzes usually from the orange boxes or larger packages of Hollandia Matzes. This Dutch bedrijf (company) was founded in 1933 in Enschede, in the east of the country. They have a proud history of producing the popular delicacy, and even admit themselves: er zit eigenlijk niks in (there is really nothing in it) – what makes them so great is that you can combine them with so many things. Therefore their slogan reads niks is zó lekker! (Nothing is this yummy!).

While most matzes they make are “normal”, they also make a portion of their production koosjer (kosher), so that it abides to Jewish food rules. They even do this onder rabbinaal toezicht (under rabbi supervision) of the Nederlands-Israëlitisch Kerkgenootschap (Dutch Israelite Church Community – NIK). So a rabbi checks that the whole production is done… well, kosher, actually.

What about that shape?

Matzes are usually vierkant (square), not rond (round), as they are most often found in the Netherlands. This vierkant shape is a reference to the tegels (tiles) that the Joden had to make during their ballingschap (exile) in Egypt. If according to tradition, matzes are vierkant, then why are they usually rond in the Netherlands?

According to H J Woudstra, oud-directeur (former director) of Hollandia Matzes: “Nederlanders eten van oudsher ronde matzes, dus maken wij ronde matzes” (The Dutch have always eaten round matzes, so we make round matzes). Perhaps it is the shape, that reminds the Dutch of their other favorite – pannenkoeken (pancakes) – perhaps?

Have you eaten matzes before? What do you think of them? Why do you think that they are round? Let me know in the comments below!