Arjen Lubach and Dutch Comedy Posted by Karoly Molina on Apr 25, 2018 in Culture

One of the first times I was able to understand comedy in Dutch, it was with the very popular Dutch show Zondag met Lubach. The combination of interesting topics (usually political), many visual images, repetition of jokes or words and his easy Dutch pronunciation have made his show a breeze to watch. 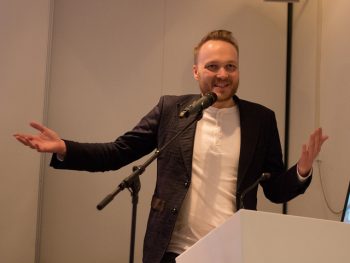 If you haven’t watched it, Zondag met Lubach is a late night talk show that reviews the week’s news with a lot of satire. An English-language equivalent of this show would certainly be “Last Week Tonight” with John Oliver. The show has been around since November 2014 and has grown in popularity and reach.

Here are a few of the show’s highlights:

Pharaoh of the Netherlands

Arjen Lubach is openly against the Dutch monarchy and he highlighted his opinion of it during a show by naming himself Pharaoh of the Netherlands. Lubach began a burgerinitiatief to bring to the Tweede Kamer where the farao would be recognized as a figure in the Netherlands, and his birthday would include parties all around the country (much like what currently happens around Koningsdag).  The law stipulates that 40,000 people must sign the petition so that it can be reviewed; Lubach gathered 65,000 signatures. You can read more about this initiative in this article by the NRC and the video below where Lubach first pitches the initiative.

Zondag met Lubach gained a lot of international attention when he mocked U.S. President Trump with the video pitching that if America would be first, the Netherlands should be second. The video makes reference to many of Trump’s ideas, his most popular expressions and a voice quite similar to Trump’s. Once the video aired, late night talk shows around the world were invited to pitch their own videos explaining why their country should be second. Below is Lubach’s video to President Trump.

In a recent show about the sleepwet in the Netherlands where the government would have more access to people’s internet data, Lubach was very much against the collection of data. Not surprising, the recent scandal involving Facebook during the U.S. and Brexit elections was another topic for the show. This time, Zondag met Lubach did something very surprising: he set a date to delete the Zondag met Lubach Facebook page. What is surprising about this move is the importance of promoting the show on social media in this day in age. An article from the Volkskrant stated:

What the show will do to continue reaching out to their current audience and to new ones is still not known.

With its enormous popularity in the Netherlands, I was surprised to read that Lubach does not accept interviews because he says “Ik geloof niet dat ik een interviewer iets te vertellen heb dat hij nog niet weet.” Fortunately for those who are curious about him, he accepted an interview with Alexander Klöpping from the Volkskrant. My fellow blogger Sten also wrote a post about Zondag met Lubach some time back with other highlights of the show.

What do you think of the show Zondag met Lubach? For those still learning Dutch, do you find him easy to understand? What other Dutch TV shows would you recommend?