Dutch Idioms 18 – Problems with Bears Posted by Sten on Mar 1, 2021 in Dutch Language

When you think of the Netherlands, your first thought may not be beren (bears). But that doesn’t mean we don’t have idioms involving those fluffy giants! In fact, we already have a post dedicated to their polar counterparts, ijsberen. But aside from curious words, there are also beer-related idioms I want to share! 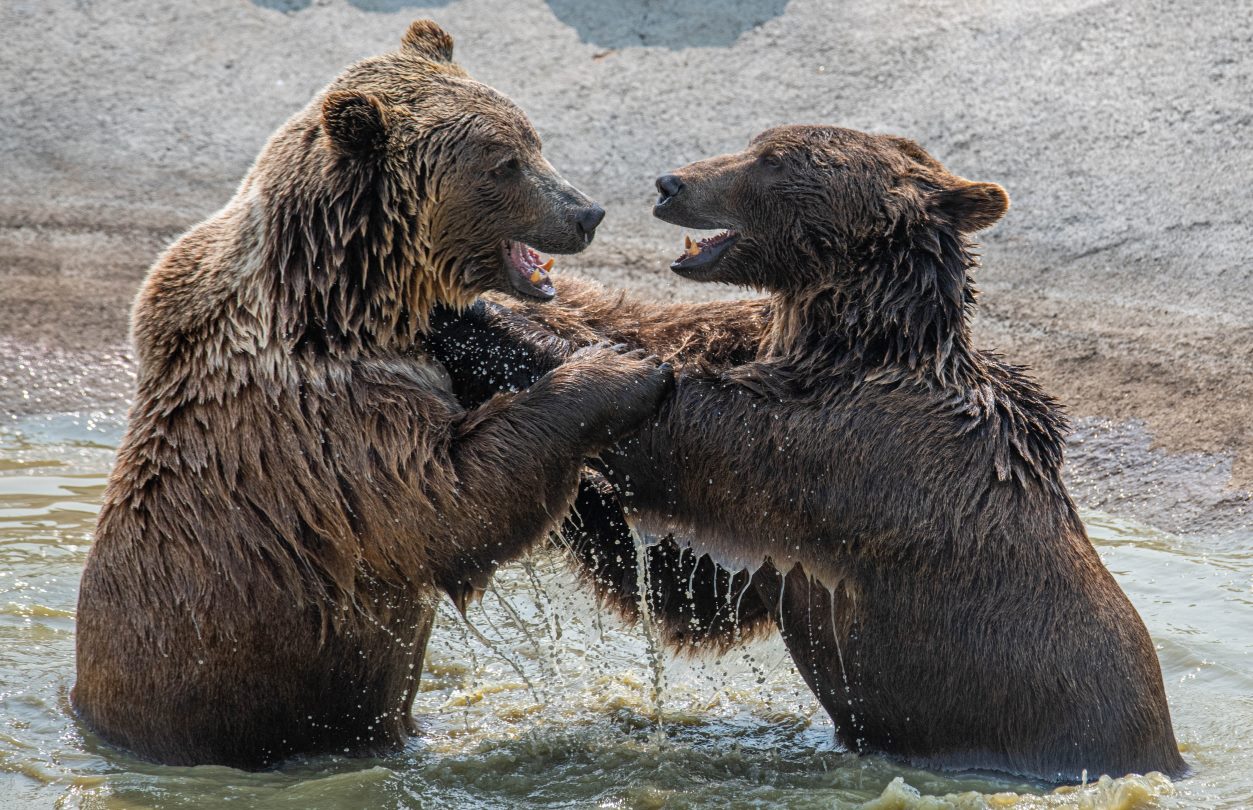 Image by mana5280 at Unsplash.com

Literally: The bear is on the loose

De beer is los is quite easily translated to English. It’s when things start going nuts! Suddenly, a lot of stuff happens, there is ruzie (arguments) and paniek (panic). However, it can also be a positive, when someone tries their best at something. It can be said the moment that something happened or right before it. In any case, you, as a spectator, don’t have any influence on what’s about to happen. If two people start fighting, you could say: en nu is de beer los…

It’s not a vulgar expression in any way, you can use it in pretty much any setting in the Netherlands, from both very informal to formal.

But where does the idiom come from?

The expression has already been seen as early as the mid 1750s. Bears haven’t been around in the wild in the Netherlands since the Middle Ages, so even then, the uitdrukking (expression) did not relate to bears in the wild.

It’s actually related to circusberen (circus bears) or kermisberen (fair bears). They were brought to fairs or circuses and made to perform acts. Of course, they were on a leash, and probably would rather be somewhere else. So at the sight of the magnificent animal with its size, claws and teeth, spectators must have wondered: wat gebeurt er als de beer los is? (what happens if the bear is on the loose?)

And that’s how it became a thing to describe a stressful, high-stakes situation. Here’s another example, but with a positive note:

(Now it’s about the golden medal in ice skating, can Kramer win?

And yes, he does it! He wins, his fans are very happy, the bear is on the loose!) 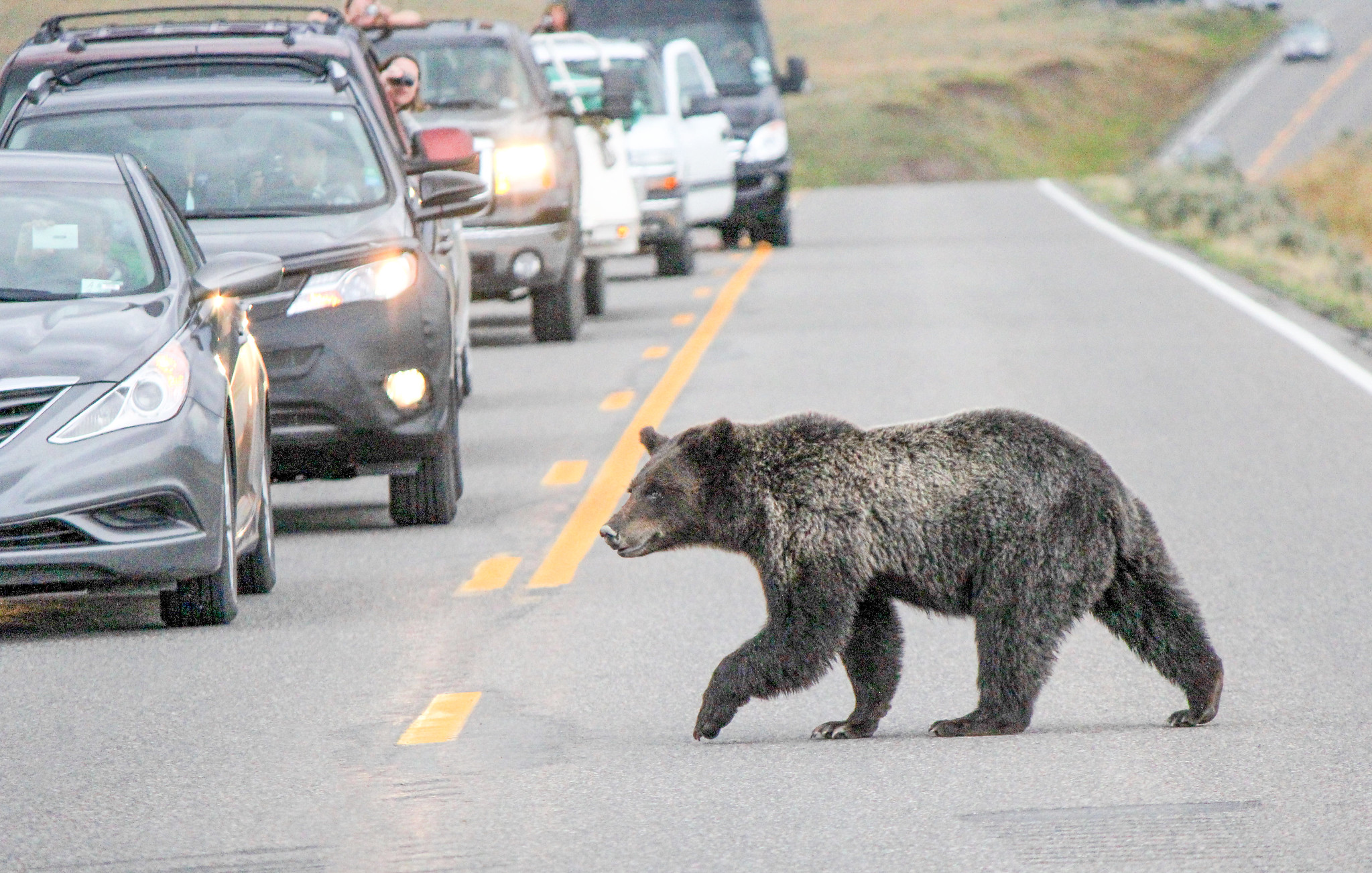 A bear crossing the road in Yellowstone (Image by Yellowstone National Park at Flickr.com, public domain)

Literally: to see bears on the road

to see things black, to see trouble ahead

This expression means that you see an insecure future. While the translation to the English doesn’t perfectly capture this, the beren in this scenario are obstacles that block the weg (road). So to be able to move along on the road ahead, there are beren that need to be dealt with.

However, “to see things black” also captures the meaning nicely. Beren op de weg zien usually refers to problems that don’t exist in reality. So you see bears on the road that in reality don’t exist! So it’s problems you imagine. This meaning is losing significance, however, as beren are more and more seen as real obstacles that need to be removed. It may also depend on who says it. For example:

(He just can’t get ahead, he only sees bears on the road).

So here, the person that speaks about Arnold probably means that he imagines issues. But then there are also things like this:

(We still see some issues on the way before we can accept this bill, and we would like to discuss those.)

Here, it’s a politician saying that there are still problems that need to be ironed out; those are probably not imagined. Of course, if somebody says about themselves that they see beren op de weg, they most likely mean that they still see issues ahead they have to actually deal with, not imaginary issues. Though that is possible, too, of course.

As you can see, the uitdrukking can be used in informal to formal settings, just like de beer is los.

In any case, the meaning of this uitdrukking has widened over time, that much is clear.

But more has happened. It has also been shortened over time. Originally, the uitdrukking was leeuwen en beren op de weg zien (to see lions and bears on the road). That’s a mouthful, so the shortening makes sense. Sometimes, though, you’ll also hear of apen en beren (monkeys and bears) or wolven en beren (wolves and bears). The beren seem to be consistently used, though.

And where does the idiom come from?

It seems like the this one has its origin in the bible. There are different passages that could make sense, but from what I found, I think the following is quite fitting (Klaagliederen, 3:10 (Lamentations, 3:10):

(He was unto me as a bear lying in wait, and as a lion in secret places.)

The bears and lions are lying in wait, ready to get you in an unexpected moment. I think this encapsulates the risk, that unsettling feeling that danger is about to strike you. And the danger might not even be real, which this uitdrukking also originally entailed. If it’s this passage or another, the connection with the bible seems to be quite strong, so this is probably where the uitdrukking comes from.

Do you have these or similar idioms in your language? Have you heard or used these idioms before? I want to know, so please tell me in the comments below!