Fietsen : Cycling in the Netherlands Posted by sarah on Feb 19, 2010 in Dutch Language

In the Netherlands, cycling is not just something fun to do on the weekends, but it is a way of life. For the Dutch, cycling is like breathing: you just do it. But what you may not know is that in the urban centers, cycling can become a real mess if you aren’t sure of what’s going on. Here are a few tips for cycling in the Netherlands that might make your cycling experience a little more fun and a little more safe.

Bicycle paths exist between in the space between the sidewalk and the road. Often times they are clearly marked by an extra white line, or are painted red, but sometimes they aren’t. When you are walking or crossing the road, assume that the area on the side of the road is for cyclists and look twice before walking. Please never step out into the street before checking for a cyclist.  This is really dangerous and annoys the locals. Don’t walk on the side of the road, walk on the sidewalk, unless you want to hear a lot of bicycle bells pinging and angry Dutch words.  In this photo, I was indeed standing in the middle of the bicycle path (fietspad) but I kept nervously looking over my shoulder: 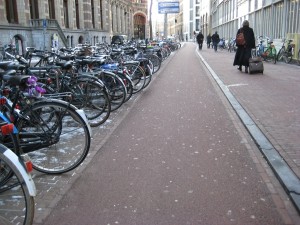 Most traffic crossings have special lights designated for bicycles. They look like a small set of traffic lights that have a bicycle symbol and they hang on the right. Always follow those lights. Do not run red lights. I know, the Dutch people around you will be doing it, but it’s really dangerous and you can in theory get a fine for it if the police see you do it.  If a fine isn’t enough to deter you, bear in mind that your body is no match for a car or tram.

If you’re not sure what to do at an intersection, just walk it. Seriously. There is this intersection I have to traverse frequently and the traffic is a mess, with 6 trams and buses, and crosswalks, and tons of cyclists, and taxis.  There is absolutely no shame in getting off the bicycle and walking, and at this intersection I see Dutch people do it too. Pedestrians have the ultimate right of way at a zebra crossing, and rather than trying to do something tricky and complicated, sometimes it really is best just to walk.

Avoid tram tracks at all costs.  Always cross a tram track so that your tires don’t fall into the tram rails.  This is one of the worst things that could happen to you on a bicycle because your bicycle will be stuck and you will get hurt.  Just remember to cross them at an angle, and you’ll be fine.

The standard Dutch bicycle has no gears and has back pedaling coaster brakes instead of handbrakes on the handlebars. This can be disconcerting at first, though I assure you there is a good reason. With my hands free from being designated to braking, I can carry a ton of stuff while cycling and still stop in time to avoid getting hit by a tram. Most of the rental companies have both styles for rent, so if you have a preference you can find a bicycle you are comfortable with.  Here are some pretty standard Dutch bicycles hanging out in front of the Universiteit van Amsterdam: 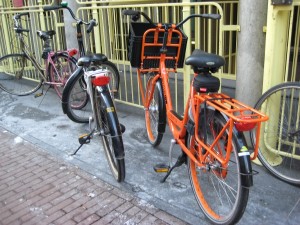 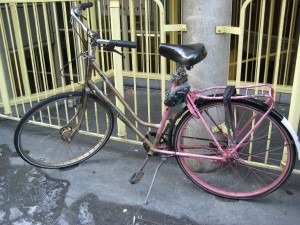 Definitely get on a bicycle if you are here. Not only is it great for your health, but it is the best way to see both the cities and the countryside. If you haven’t ridden a bicycle since you were a kid, there are lots of group tours run by professionals who can safely guide you about the city and give you some time to get reacquainted with the bicycle. An added bonus of traveling in a tourist pack is that the locals will know who you are and avoid you at all costs. If you’re a little more daring, just rent a bicycle and see what happens. There is absolutely no better way to see this country than on a bicycle.