Follow Up: 4 Things I Dislike about the Netherlands Posted by Karoly Molina on Mar 3, 2016 in Culture

Last week I wrote about 4 things I disliked about the Netherlands, and I must say I was quite happy with the number and the variety of the comments the post received.

Several of you included things you dislike about the Netherlands that I didn’t write about so I would like to compile everyone’s comments into one list.

The Dutch food is what caused the most disagreement, and that is easy to understand. We each have our own palate of tastes we like and dislike. A few of the readers commented on how certain foods remind them of their childhood or Christmas, and that is awesome! I find amazing how one small bite of food can transport us to different time periods of our lives! I do like a lot of the Dutch food (stroopwafels, haring, oliebollen, poffertjes, bitterballen, some variations of stampot, erwtensoep, etc.). I also find interesting the variety of international restaurants in the Netherlands. I read somewhere that the Dutch spend most of their “eating out money” in restaurants that offer food from other places. An advantage to of our globalized society we can try so many varieties without needing a passport, and we can form our own opinion of what we like and what we don’t. That is my opinion anyways!

Speaking of food, I was left intrigued by moorkoppen that Carla suggested I try. I had never had one so I was out on a mission to try them and they were delicious! The bakery where I purchased them from had them labeled as chocolade bollen but they assured me it was the same thing! 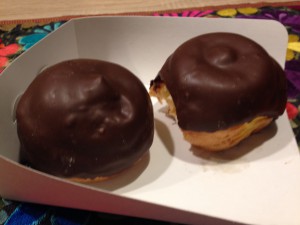 Finally, I would like to point out that the post was not meant to be offensive to anyone or to the country. Like Peter commented, no country exists where we can be 100% happy with everything. I loved living in the U.S. and yet found some things I disliked. The same holds for Mexico and the Netherlands. My aim with this blog is to simply share, and hopefully, debate with you, the readers, our experiences in the Netherlands. This post was actually inspired by one of the readers. On a previous post, someone commented that I focused too much on the positive. After giving it some thought, I realized that I do focus on the positive. This isn’t because I work for the Dutch government nor am I in some sort of mission to get everyone to love the Netherlands. I am simply an optimist and I enjoy writing about the positive aspects of my life here. That said, I know there must be some sort of balance in my posts, and this is why I try to keep the idea of writing about things I dislike open.

Like “thesmallgirl”, one of the readers, said “although I’m complaining, I love this land!”