How to Get a Bike in the Netherlands Posted by Sten on Jul 27, 2020 in Culture

So you’re moving to the Netherlands and you need to get around. Unlike the United States, the essential mode of transport is not a car, but a fiets (bike)! Their love for fietsen (to bike) is one of the most famous cultural distinctions of the Dutch. But how do you get one? Do you buy a nieuwe fiets (new bike)? Tweedehands (second-hand)? Or do you go with a abonnement (subscription)? Here are some of the best options in my opinion. 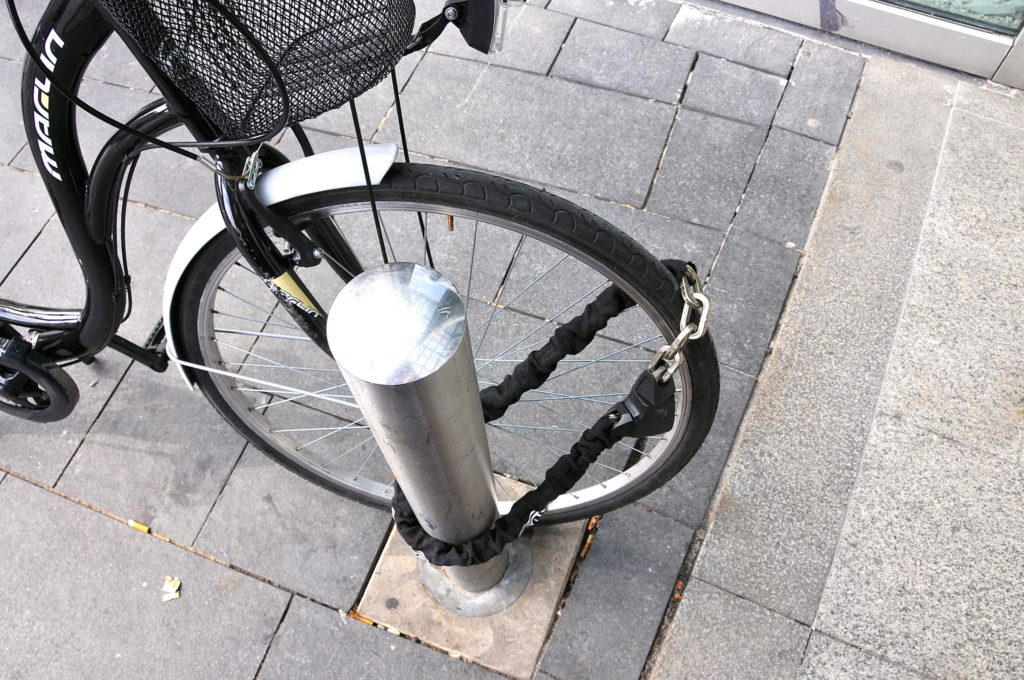 A proper fietsslot! (Image by FaceMePLS at Flickr.com under license CC BY 2.0)

Before getting into the different ways to buy a bike, I want to make a disclaimer: No matter the kind of bike you get, get a proper fietsslot (bike lock)! These are absolutely essential. AXA and ABUS make some real nice ones. Make sure it is a chain (I know, they are heavy), because anything less is easy to cut through and basically gives you no protection. So yeah, spending anywhere from 20-50 euros on a proper bike lock is a good investment. It is often easy to “store” when biking by wrapping it around your saddle and locking it. That’s always worked for me! 🙂 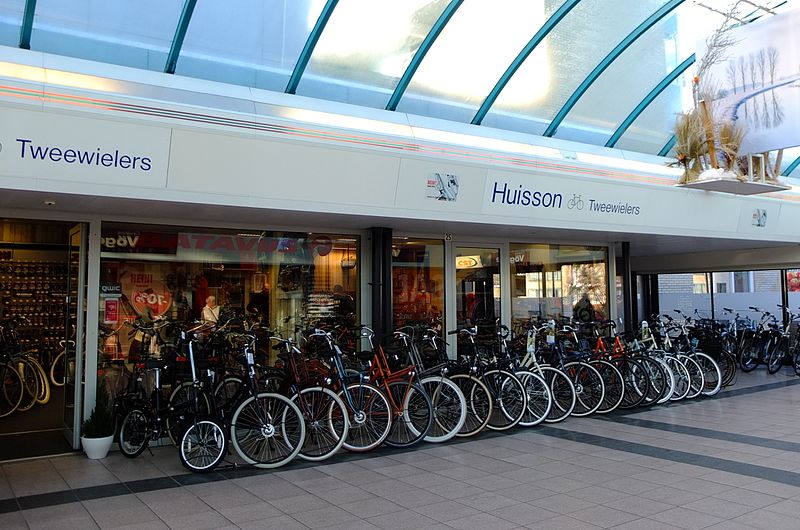 A typical fietsenwinkel in the Netherlands (Image by G.Lanting at Commons.wikimedia.org under license CC BY SA 4.0)

While it might seem enticing to go out and buy a new fiets that has all the bells and whistles, I don’t recommend it. But if you buy new, and it was not a trivial amount (it usually isn’t), it would be wise to get insurance. For only a few euros a year, you can insure your investment.

Insurance is really important, because fietsen are stolen in the Netherlands all the time. And if you have a new fiets, it is an even more attractive target for thieves. A friend of mine had her new bike stolen twice within a few months. Because she had insurance, she lost no money, but having to deal with that… Not great!

If you want to buy a new bike, the best way to do that is at a fietswinkel (bike shop) close to your home. If you have any issues, it’s always nice to just be able to go back there and have them take a look at it. 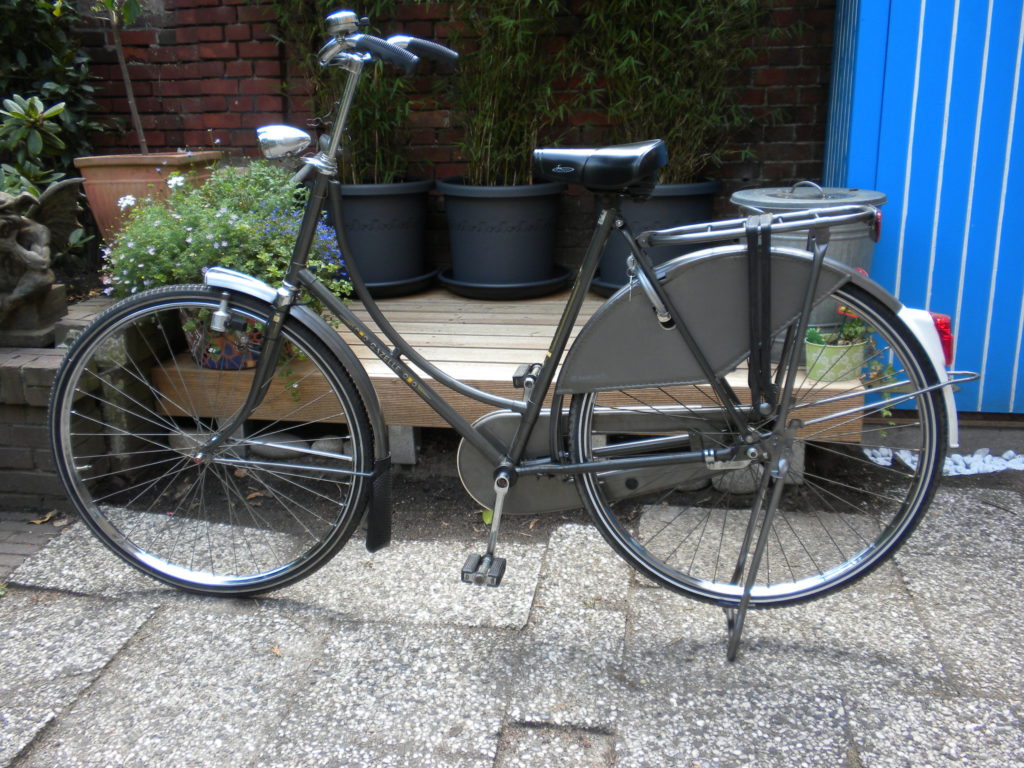 A typical Dutch omafiets! Notice how there are no gear shifters or brakes on the handlebar (Image by huubvanhughten at Flickr.com under license CC BY 2.0).

Because of the theft issue I talked about above, it is advisable to buy second-hand. On the tweedehandsmarkt (second-hand market), you are likely to also find dodgy sellers that sell for way too little. There is a good chance those bikes are stolen. However, fietsen change hands so many times, there is a good chance that wherever you buy it from, it was stolen at some point in the past.

The fact that fietsen change hands a lot doesn’t have to be a bad thing. However, look for bikes with a single gear (gewone versnelling) and a terugtraprem (back-pedal brake). Since the Netherlands is so flat, you almost never need multiple gears. And you easily get used to the terugtraprem. The reason is that these two things simplify the bike mechanism a lot, and so the bikes are less likely to break. The typical Dutch bike, also known as the omafiets, has this exact configuration, as the one in the picture above. So on top of simplicity, you also get a traditional Dutch fiets!

Easy places to find used bikes is on Facebook groups for used bikes/tweedehands fietsen for the city that you move to. Marktplaats is also a popular website to offer second-hand goods. Sometimes there are (student) associations that offer used/refurbished bikes. And fietsenwinkels sometimes also offer second-hand bikes, though I found those to often be more expensive.

It’s advisable to go in person and take the bike for a spin. Prices can be anywhere from 20 to 150 euros for used bikes. This also depends on where you are, of course. For the bike above, for example, I would expect it to sell for about 70 euros. There’s no visible rust (apart from some flaky paint), no spokes are missing, it seems to be good. But again, definitely try it out first, see if the brakes work, if the bike makes any weird sounds, if the handlebar steers smoothly, if the wheels are straight, etcetera.

The nice thing is that a second-hand bike won’t stand out and is therefore less likely to be stolen, especially if you have the right lock! 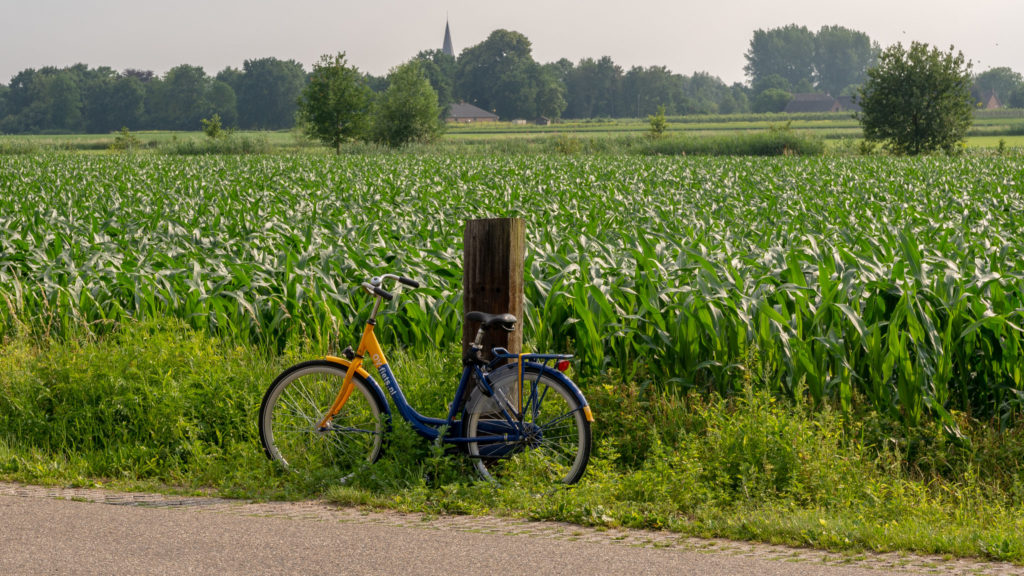 OV-Fiets (Image by Rob Dammers at Flickr.com under license CC BY 2.0)

Since a few years, abonnementen have been available for fietsen. A well-known company whose business model revolves entirely around fietsabonnementen is Swapfiets. For a monthly fee, they guarantee that their fietsen always work. If your swapfiets no longer works, they deliver you another working one within two days. With the cheapest option of €16.50 per month, you get an omafiets. You also pay €15.- up front; but then you can cancel every month. They also offer more expensive tiers and even an electric bike. However, that gets quite expensive at €75.- per month. At a similar price, you can also get a monthly subscription with VanMoof, a brand of high-end electric bikes that offers similar services. If you are only for a short time in the Netherlands and don’t want to go through the hassle of buying and selling a fiets, this is a good option.

Another kind of subscription is OV-Fiets and similar services like NextBike, where you get a subscription or pay per ride. If you never really need a bike, these can be good enough options, too.

How did you get your hands on a bike in the Netherlands? Or did you not get one at all? Let me know in the comments below!