How to tell someone to f*** off in Dutch Posted by Karoly Molina on Nov 17, 2014 in Dutch Vocabulary 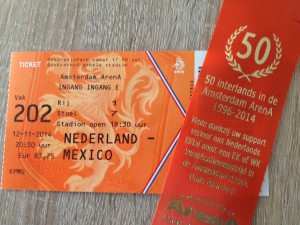 Yesterday the Netherlands and Mexico played a friendly soccer match in Amsterdam. If you followed either country during the World Cup in Brazil, you know it was a very important match, at least for Mexicans. Mexico and the Netherlands faced each other, and the Netherlands beat Mexico after a controversial penalty on Robben. In Mexico, people were furious and people vented their anger with songs, t-shirts, posters and memes. Needless to say, yesterday’s game was very important. Tensions ran high and angry words were exchanged.

In matches like this one, it is very easy for your anger to go unnoticed by your loathed enemy. Therefore, it is very important that you know how to let them know you are upset, pissed, angry, and furious at their unfair play or the simple fact that they beat you. Hence, today’s post will be full of useful and a bit offensive phrases that will get your anger across very easily (and make you sound like a native speaker in the process)!

Godverdomme literally means “God damn” which is also very common in English (at least in the U.S.). I remember using “God damn it” a lot and started saying God verdom het in Dutch, but that is incorrect. In Dutch, the insult stays with God.

A very popular expression among young people is kut. In use, it is similar to fuck but actually refers to a female reproductive organ. Kut jongen is also very common.

Rot op literally means to rot off, which normally wouldn’t raise any eyebrows and would make me laugh, is equivalent to “fuck off” in English.

Rotzak or klootzak are used interchangeably for someone who is really annoying you or you find to be a total jerk (or asshole). These mean either bag of rot or bag of male genitals.

Eikel is a funny bad word because it means pinecone but is used as asshole.

As a language teacher, I have always found very comical how easy people learn bad words in their target language. The conjugation of verbs, prepositions, the name of common household items and the days of the week are never as easily and quickly learned as bad words. With this list you are armed to face off your biggest opponent and let him know just how much of an eikel he or she is!