This is how a kinderliedje goes that is sung around Sinterklaas time. See it here:

Natuurlijk zwarte piet. Of course! He is part of the Dutch Sinterklaasfeest and annual tradition like nothing else. White Dutch people paint themselves black and dress up as zwarte piet, the kind and nice helper of Sinterklaas. They spread pepernoten and other lekkers all over the place, give hands full to kids waiting for Sinterklaas to pass by with his pieten. It is the Dutch tradition that is celebrated by literally everyone.

One side says that it is not, as racism has never been the intention of zwarte piet, and the tradition says that piet is black. The real reason for this is not even clear. Some say they actually represent slaves of Sinterklaas that would work for him back in the days. Some have a more innocent explanation: because the pieten deliver all the presents on December 5 by climbing through the chimneys, this theory says that piet just got all black because of the roet (soot). And since there are so many chimneys, the soot would not go off anymore. There may be plenty more explanations, but the main point is that nowadays there is no racist connotation with zwarte piet among the Dutch.

The other side, however, claims that depicting zwarte piet as the dumb, black helper that works for the white Sinterklaas is patronizing and racist. This view came from other countries, raising their eyebrows upon seeing this peculiar Dutch habit. Not surprising, when you see things like this:

They claim that this goes way too far, and should be stopped.

The solutions found this year are manifold, and the struggles to get it right for everybody are greater than ever. Some pietencentrales (companies that rent out pieten) offered pieten in different colors: purple, yellow, blue, green… Whatever you want. But that backfired: most pietencentrales got calls from their customers that wanted a confirmation that their pieten would really be black.

The official, national city where Sinterklaas will be arriving on his boat all the way from Spain this year is Gouda. The municipality also faced this issue: what to do to please everybody? That nobody feels offended, but everybody is still able to celebrate Sinterklaas as usual? Their idea: two new kinds of pieten: the stroopwafelpiet (caramel wafer piet) and the kaaspiet (cheese piet). Both very Dutch things, and why not paint a piet in the colors and patterns of kaas and stroopwafels? Well… A survey resulted in 93% saying that this would not solve the pietendebat. Bad replacement, it seems…

The Sinterklaasjournaal, the annual TV program made for children around the time of Sinterklaas, also dealt with this racial issue. In the first episode, watched by a whopping 850 thousand people, showed the normal, black pieten. Then, in the second episode, white pieten are used as helpers for Sinterklaas, because for some reason many pieten could not come from Spain to the Netherlands. One of them climbed through the chimney and came out with black roet. Personally, I think that is the best way to deal with it!

What do you think. Should it be allowed, should it be forbidden? What are your thoughts on the Sinterklaasfeest? Gezellig or gruwelijk? 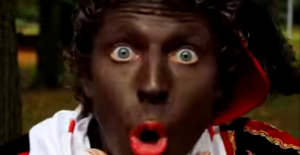