What does Brexit mean for the Netherlands? Posted by Karoly Molina on Mar 6, 2019 in News

March is here and there is only one thing in the EU’s mind: Brexit! March 29th is the official day for the UK to leave the EU and everything in the news indicates that it will be a hard Brexit. The EU and the UK recently came up with an exit deal, but the British parliament is not happy with it. While Brexit might seem like a UK problem, everyone in the EU will be hit, including the Netherlands. Below are some important Brexit-Netherlands points to consider. 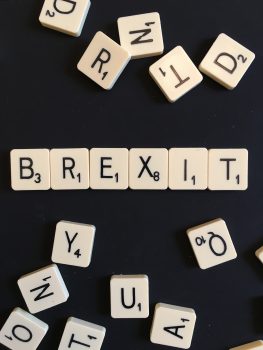 Photo taken by Jeff Djevdet found on Flickr.com with license CC BY 2.0

The EU and UK representatives came up with the withdrawal deal which feels a lot like scheiden or divorce documents. There are three main points in the deal, one of these three is incredibly controversial in the UK. First point is that the UK will pay the EU about $51 billion dollars to withdraw from the EU trading zone. The second point is the fate of UK nationals living in the EU and EU nationals living in the UK. The third and most controversial point is the border in Ireland.

Northern Ireland and the Republic of Ireland are two separate areas. The first is part of the UK and the second is independent. From the early 1960s to 1998, Northern Ireland underwent a severe war-like state. Ethno-nationalist groups attacked each other. In very simple terms (and this was by no means a simple conflict) there were factions who were Protestant and wanted to be part of the UK and factions that were Catholic that wanted a united Ireland. Northern Ireland had three decades of bloodshed which ended in the Good Friday agreement in 1998.

When the UK leaves the EU, border checks will have to be implemented. For Ireland, this means that people from Northern Ireland and the Republic of Ireland will not be able to freely move from one area to the other like they do now. Given the history in the area, grenscontrole or border check points could potentially reignite the division. So the question is how to ensure border checks and limit the movement of people (which Brexiters want) and ensure peace?

The Netherlands and Mark Rutte

The leaders of the EU have been busy working with the UK to get the best possible Brexit deal for the EU. With the UK leaving, the Netherlands will be bumped up in power position in the EU right after Germany and France. In response to this, the Dutch prime minister Mark Rutte has been busy working out deals, negotiations and possible scenarios with Emmanuel Macron (France) and Angela Merkel (Germany). A recent article in the Dutch newspaper explained the relationship between the three M’s of the EU (Macron, Merkel and Mark).

For the last few years, our polderpremier Mark Rutte has made it a point to emphasize the importance of a strong and united EU. However, this hasn’t always been the case. When his political career as prime minister began, he questioned the EU as a whole. The financial crisis of Greece and Spain as well as the UK referendum about Brexit have brought about a change in rhetoric.  In the following video from Mark Rutte’s weekly press conference from February 15, he emphasizes the importance of a sterke vereniging (first 2:50 minutes).

Will Brexit bring trouble to the Netherlands?

The UK is one of the biggest trade partners of the Netherlands, following Germany and Belgium. According to the Dutch government website, the loss of the UK as a free trading partner will reduce the Dutch GDP by up to 1.2% by 2030. To prepare for this, the Dutch government has been taking several measures including attracting EU offices that are now based in the UK. The European Medicines Agency or EMA will move its offices to Amsterdam. There were also very intense talks with big companies such as Unilever to move their head offices to the Netherlands (Unilever currently has a head office in each of the two countries).

The Dutch government has also ensured that the British citizens currently living in the Netherlands keep their verblijfsrecht or their right to stay. All around the country, UK nationals were invited to information sessions while the IND or Immigratie -en Naturalisatiedienst figured out the plan of action. Early this year, British nationals received by mail an official document which will act as a verblijfsvergunning guaranteeing their residence and right to work in the Netherlands

I had previously written posts about random ingenious projects from the Netherlands. It seems Brexit is no exception! Julia Veldman, a Dutch visual story-teller, started the boy-band Breunion Boys “out of a desperate need to do something about Brexit. ‘It’s like in a relationship, if your wife suddenly tells you she’s leaving, without an explanation and you don’t even get the chance to respond’.”  The videos from Breunion Boys are everything you would expect from a boy-band: choreographed dancing, dramatic scenes with tears, a short little rap section and, because it is in the Netherlands, it happens in the duinen by the North Sea. You can see one of their videos below.

Will Breunion Boys bring Britain back?