A Guide to Arches National Park Posted by sasha on Jun 9, 2014 in Culture, English Language 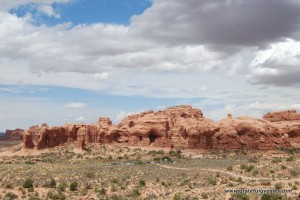 Season: Open all year, 24 hours a day. Hours for the visitor center vary depending on the current season.

Accommodation: Devil’s Garden is the only campground in the park and is $20 per night. Moab has several hotels and guesthouses available for all budget types. 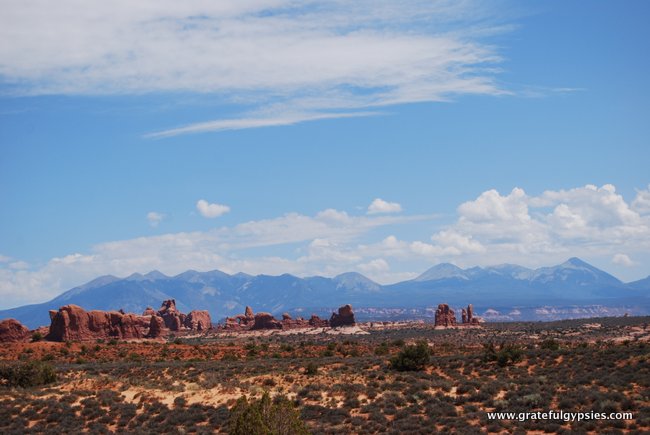 Beautiful snow-capped mountains in the distance.

Brief Description: With more than 2,000 natural stone arches plus hundreds of massive fins, pinnacles and balanced rocks, this national park can keep you occupied with wonder for hours. It is the underground salt bed that is responsible for the different formations throughout the park. The land has been used for thousands of years by the American Indians. They would search the desert for animals, wild plant foods, and stone for tools and weapons. The first Euro-American to live in the park was John Wesley Wolfe. He and his son operated a cabin and corral near the Salt Wash for over 20 years. Visitors can still visit the cabin today. In the 1940’s Loren “Bish” Taylor brought attention to the area by writing about it in Moab’s local newspaper. More and more people began visiting the park, and in 1929 President Herbert Hoover declared it a National Monument. Its borders were expanded many times until finally it was declared a National Park in 1971.

Watch a video of a Park Ranger talk about Arches

Personal Experience: We began our visit to Arches at the visitor center. We watched the introductory film and looked around the little museum that introduces the history and the wildlife. Our first stop was the Park Avenue viewpoint. 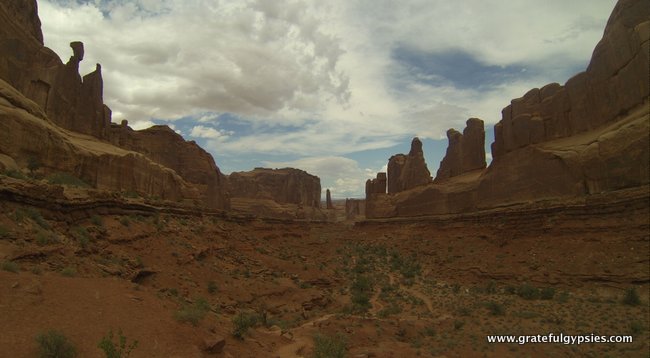 We would’ve liked to hike the Park Avenue trail, but it doesn’t make a loop. You would need someone to pick you up at the other end or backtrack to your car. We didn’t want to backtrack so we moved along to the next stop, the Courthouse Towers Viewpoint, where we admired the Three Gossips, The Organ and the Tower of Babel. 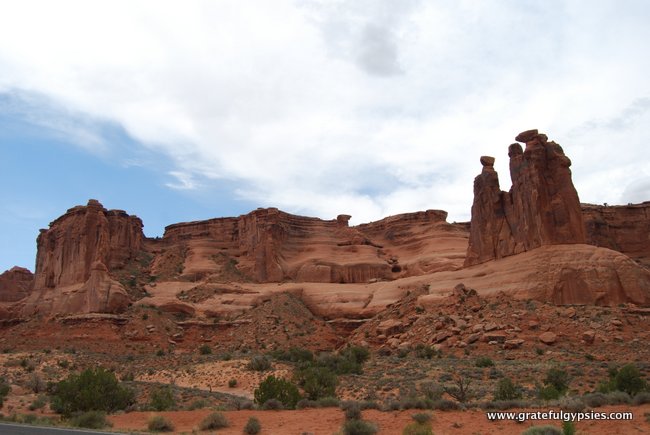 The Three Gossips; I wonder what they are gossiping about.

We continued driving along the road to the Petrified Dunes Viewpoint and took in the view there.

After that we went to The Windows Section. This is one of the most popular sections of the park because there are so many things to see. We were most interested in the North and South Windows and the Turret Arch. As we hiked along the trail that makes a loop around the Windows we could also see the Double Arch. 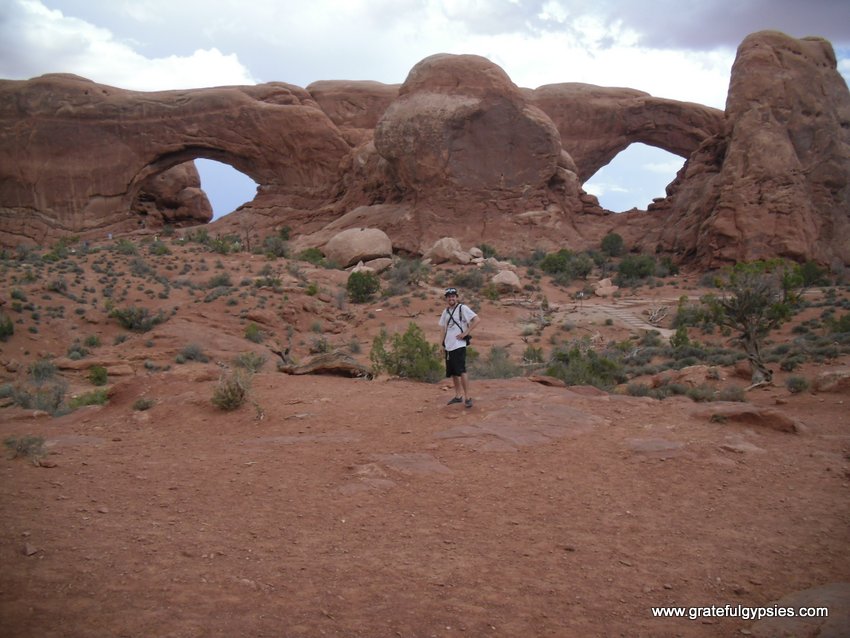 The North and South Windows 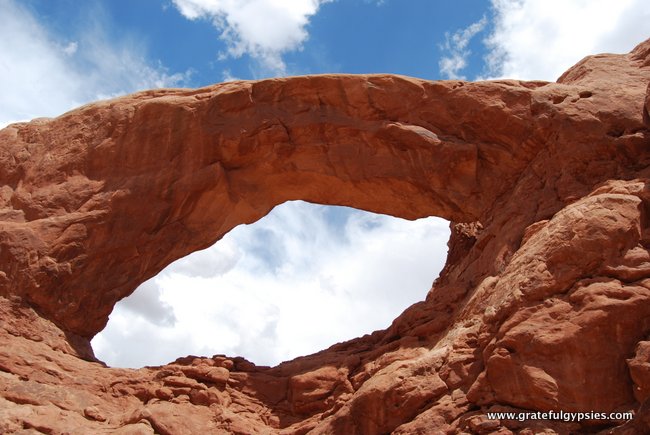 Standing below the South Window

At this point it looked like a storm was rolling in so we quickly drove over to the Balanced Rock. Just as we were finishing our walk around the loop trail of the same name, it started pouring rain. 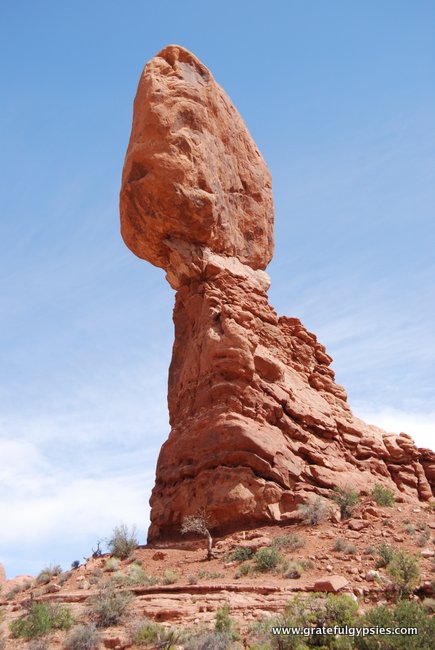 It doesn’t even look like rain! Desert weather is crazy.

We ate our lunch in the car while we waited for the rain to stop. When it finally finished, we hiked along the Devils Garden Trail. We finally found the Landscape Arch. In 1991 a large piece of this arch broke off and fell to the ground. Luckily everyone got out of the way in time and no one was hurt. A traveler who happened to have a video camera caught the whole thing on tape. This incident is proof that the rock formations are still changing and may not be there some day in the future. 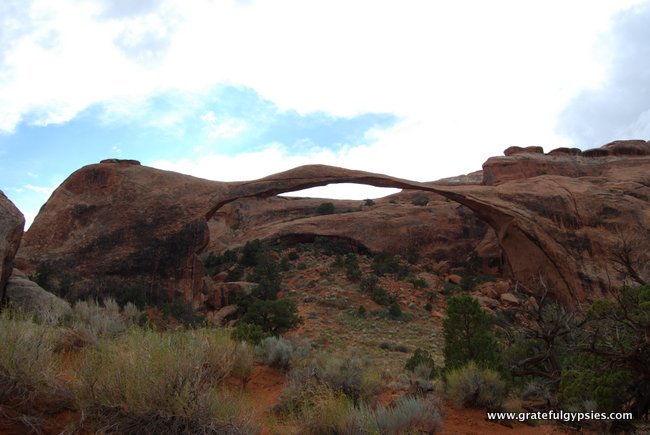 Can you see where it is very thin to the right of the middle?

We wanted to end our day by visiting the most famous arch and the symbol of Utah, the Delicate Arch. There are three ways to see the Arch; the first, and best, is to hike the trail from Wolfe Ranch. It’s about 1.5 miles long and takes about an hour and fifteen minutes one-way, but it will take you directly to the Arch. If you’re not feeling up for the hike there are two Viewpoints, Upper and Lower, where you can see the Delicate Arch. We went to the Lower Viewpoint and even though you can see the arch it’s quite far away. I really wanted to walk up to the Upper Viewpoint but it started raining and storming really hard so we decided to call it a day and headed back into town. This park is amazing and we will return someday to hike all the way to Delicate Arch and finish hiking the Devils Garden Trail.